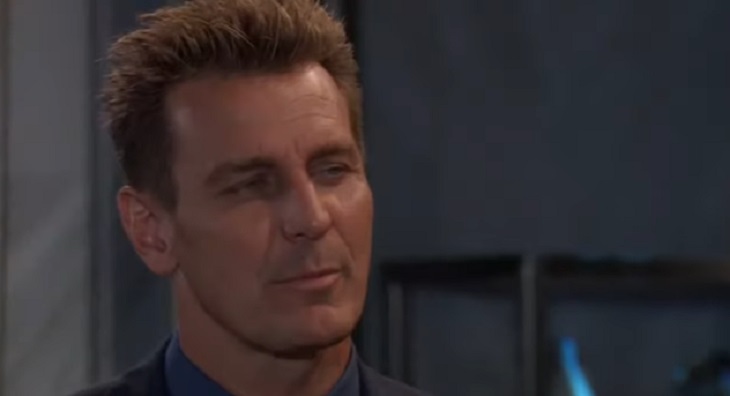 First we see Jasper Jacks (Ingo Rademacher) becoming suspicious of his new employee and potential love interest Nina Reeves (Cynthia Watros) as he tells her he’s got a feeling there’s something she’s not telling him!

Considering that in a recent episode she asked fellow employee and private investigator, her old friend Curtis Ashford (Donnell Turner) to give her the intel he finds out for Valentin Cassadine (James Patrick Stuart) to Nina first, Jax is probably right. Nina’s no fool and she’s got her radar on where Jax is concerned, and especially since he brought Hayden Barnes (Rebecca Budig) on board!

Next, Ava Jerome (Maura West) runs into Valentin and teases him about if he’s looking for a message from the other side! Valentin scowls down at her not appreciating the tease, even though she seems a little on the flirtatious side about it.

He’s probably having flashbacks to when he got genetic material from Madeline Reeves’ (Donna Mills) dead body and Sibley Gamble (Veronica Cartwright) had given him an unsolicited psychic message about Madeline telling him to use tweezers the next time! His scowl may be hiding fear about how in the world did Sibley know anything like that; was she also hiding and watching like Liesl Obrecht (Kathleen Gati) was that day in the funeral chapel?

Alexis Davis (Nancy Lee Grahn) and Dr. Neil Byrne (Joe Flanigan) are talking together, possibly about a situation she is asking his advice about. He tells her there’s a way to put something to the test.

General Hospital viewers will recall that first he told her he couldn’t treat her anymore and then he changed her mind to do an emergency family situation so Kristina Corinthos-Davis (Lexi Ainsworth) could tell her mom what she had put in her pledge to Shiloh Archer (Coby Ryan McLaughlin). Will this be about Neil and Alexis testing out a potential romantic relationship, or something else?

Jordan Ashford (Briana Nicole Henry) wants to know if Stella Henry (Vernee Watson) can honestly say that she is at peace with something; could it be the fact that she has a relative right there in Port Charles that she never knew about before? It seems strange that no one has addressed the elephant in the room about this being a relative other than nephew Curtis, but it seems Stella wants to just leave it alone. Could she be hiding a secret involving a love child she doesn’t want anyone to know about?

In Friday’s General Hospital episode, Lulu Falconeri (Emme Rylan) was blindsided at receiving divorce papers via courier at Aiden Webber’s (Jason David) birthday party! It’s a good thing that her mother, Laura Webber (Genie Francis) was there to give her emotional support at the time.

In Monday’s episode, she encourages her daughter further, telling her she can either just give her husband Dante Falconeri (Dominic Zamprogna) what he wants, or she can fight! Knowing Laura, she’ll encourage Lulu to fight for her man even if Dante might think a divorce would be for the best, not knowing if he will ever improve and would rather see Lulu move on and find happiness with someone else!

Lulu is not the only one to be blindsided by Dante’s divorce request and other recent events! Olivia Falconeri Quartermaine (Lisa LoCicero), always siding with her son of course, will update Dante’s father, Sonny Corinthos (Maurice Benard) on recent events and probably the divorce request which likely travelled down the family pipeline from either Lulu or Laura.

Olivia is of course devastated and emotional as always, as she tells Sonny that Dante shot Lulu’s boss! She of course is referring to when Dante didn’t want to see Maxie Jones (Kirsten Storms) who came with Peter August (Wes Ramsey) for a visit arranged by her dad Frisco Jones (Jack Wagner). Maxie had rushed into the visitation room like a bull in a china shop, and when Peter went to pull her back, Dante’s bullet hit him, which was likely from one of the WSB agent’s guns, which Dante had gotten away from him.

General Hospital viewers will recall that in Friday’s episode, Shiloh had gotten out on bail, and had shown up at the Floating Rib where Drew Cain (Billy Miller) and Jason Morgan (Steve Burton) had been having a brother-bonding session.

Shiloh had already raised Drew’s ire by bragging about his probably ill-gotten ELQ shares bequest from Oscar Nero Quartermaine (Garren Lake Stitt), which Drew actually had discussed with Jason wondering if it could have been forged by Shiloh! Apparently, after Jason left Shiloh really started pushing Drew’s buttons, because we see him rush at Shiloh, pushing him against the bar ready to choke him with his bare hands! Shiloh seems to have that effect on a lot of people lately!