General Hospital Spoilers: Molly Freaks At Sam For Cozying Up To Shiloh

General Hospital spoilers tease that Molly Lansing-Davis (Haley Pullos) will double down her efforts and her worry about her sisters. She will confront Sam McCall (Kelly Monaco) and want to know why she and Jason Morgan (Steve Burton) aren’t working faster to save Kristina. Little does she know Jason Morgan (Steve Burton) already has Kristina. Molly is also worrying because she feels Sam is being drawn into the cult as getting a little too close to Shiloh Archer (Coby Ryan McLaughlin) .

Of course, General Hospital viewers know Sam is faking, trying to cozy up to Shiloh Archer (Coby Ryan McLaughlin) so she can gain his trust.

Sam wants some intel to try and take down the cult, and Shloh personally. She may have to change her tactics, now that she knows the DA, Margaux Dawson (Elizabeth Hendrickson) is also in the Dawn of Day.

The police are aware that there may be shady goings-on behind the sweet and innocent front that Dawn of Day presents to the public. One particular member of the PCPD, Detective Harrison Chase (Josh Swickard) knows there are, and Willow Tait (Katelyn MacMullen) can attest to it.

Sam may have to actually try to get into “The Trust” to find out the most intel. This is something Jason won’t go along with at all! But to take Shiloh and the cult down, that may be what she will have to do.

Sam will need to get the kind of intel that Margaux wouldn’t be able to shut an investigation down over. She needs something that would be over the DA’s head and her influence. If Dawn of Day were not isolated to the State of New York, it would be simple – call in the FBI!

But unfortunately, the feds wouldn’t be interested in investigating two relatively small groups in locations close to one another in the same state. Sam needs to get in deep enough to find out some of Shiloh’s own secrets, say from his mercenary days in Afghanistan. 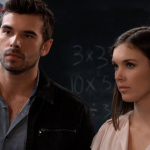 Then she can get proof of something with no statute of limitations. Maybe she can get him investigated and taken down by the Feds and all the “disciples” would get deprogramming.