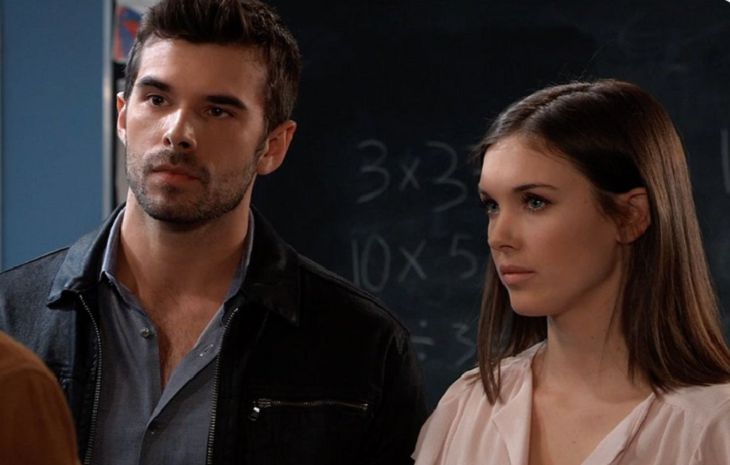 “General Hospital” spoilers for Wednesday, April 10, tease that Maxie Jones (Kirsten Storms) will give Peter August (Wes Ramsey) a choice. As he stands outside the door of her apartment, Maxie will ask it Peter’s staying or going. Their romance could take a big step forward if Peter chooses to enter and they can’t control themselves.

That might be a solid reason for Peter to decline, especially if he doesn’t want to blow this by rushing it. Then again, Peter might join Maxie and successfully stick to just talking. Whatever the case, GH may decide to hold off on these two making love. It seems a bit too soon since they just got together.

Meanwhile, Anna Devane (Finola Hughes) will be in crisis mode. She’ll worry she’s misinterpreted a relationship in her past, so she’ll share her concerns with Dr. Hamilton Finn (Michael Easton).

Shiloh and Harmony are finalizing the plans for Kristina's DOD ritual, West Coast. But what happens after? An all-new #GH STARTS NOW on ABC! pic.twitter.com/3wy9jAwsBv

General Hospital Spoilers – Are Anna Devane’s Memories Her Own Or Alex’s?

Anna will fear that Robin Scorpio-Drake (Kimberly McCullough) is Alex Devane Marick’s (Finola Hughes) daughter instead of her own, but there’s a good chance the fake memory involves Peter instead.

Other “General Hospital” spoilers say Willow Tait (Katelyn MacMullen) will get a sweet surprise. Harrison Chase (Josh Swickard) will plan something special for Willow and hope she likes it. It sounds like Chase’s gift will be a tad on the peculiar side, but Willow will love that he thought of her.

Next, Jason Morgan (Steve Burton) will be ready to roll. He’ll assure Sam McCall (Kelly Monaco) that he can sneak in Shiloh Archer’s (Coby Ryan McLaughlin) lair, grab Kristina and make a break for it. This kidnapping is crucial if they want to get Kristina out of this Dawn of Day nightmare.

Sonny Corinthos (Maurice Benard) will agree as he explains the situation to Alexis Davis (Nancy Lee Grahn). She’ll worry about the aftermath, but Sonny will only be focused on the here and now. He’ll think they just have to save Kristina and worry about the rest later. They can handle an angry Kristina, but they can’t leave her to become Shiloh’s property.

However, Jason had better hurry up! “General Hospital” spoilers say Harmony (Inga Candranel) will give Kristina a drink to calm her nerves, but this drugged beverage will really just leave her woozy and compliant. Some shocking moments are ahead once Jason arrives to save the day.

Hey #GH fans,
Can Sonny And Jason get Kristina out of the DoD cult? Find out right here ⬇️⬇️⬇️https://t.co/vpEi32K86k

‘Bold And The Beautiful’ Spoilers Wednesday, April 10: Hope Wants To Be Friends With Flo – Wyatt Tells A Secret