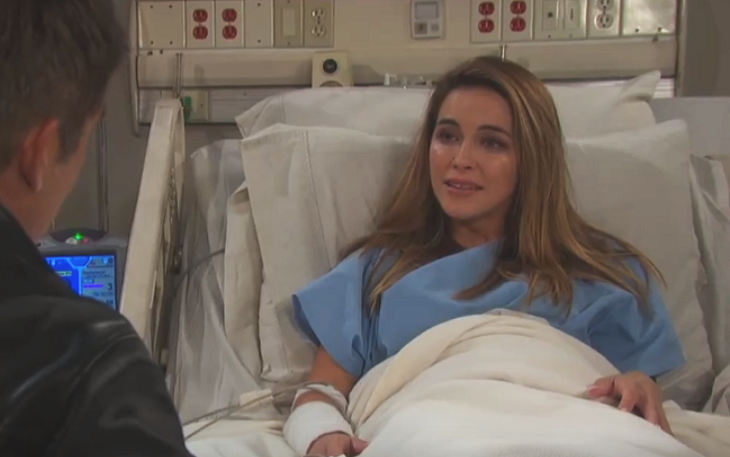 Days Of Our Lives (DOOL) spoilers tease that Jordan Ridgeway (Chrishell Hartley) will have a new drama to deal with in the coming months. She had a baby boy, whom she named David, and handed him to Rafe Hernandez (Galen Gering) to raise her baby. This child will have a real issue to deal with while growing up – he will know his mother (Jordan) is completely insane.

For Chrishell, this storyline is much like one she did on All My Children. Only on that soap, she was the daughter of a psycho nicknamed Janet From Another Planet.

“Amanda’s mother (AMC) was crazy and she was a little afraid she would turn out to be crazy like her but she never actually did. That being said, Amanda made a lot of bad choices out of the fear of mental illness. She was later reformed and she hopes the same will happen for Jordan,” Hartley explains.

Days Of Our Lives Spoilers: Hope Stunned By The Depth Of Ted’s Affection

Last week, the DOOL fans learned that Jordan had been keeping a secret from everyone – she had a baby boy and sent him to live with someone safe in California while she took off to Salem to see Ben Weston (Robert Scott Wilson). It’s hard to imagine why she would do this but for someone with a history of mental illness, it made perfect sense to her.

According to ABC Soaps In Depth, she decided to call Rafe and ask him to take her child. Rafe is the man to call when you are in trouble. And given their past romantic history, Jordan thought he was the one who would help her.

And, he did. He vowed he would protect her son and raise him. He knew that Jordan trusted him with her child and he isn’t going to let her down. It is something that Hope Brady (Kristen Alfonso) isn’t thrilled with and it could be a deal breaker in their marriage.

Days Of Our Lives Spoilers Will Rafe Hernandez And Jordan Ridgeway Reunite?

Given Rafe is determined to be the daddy to her son, it could happen. Right now, it seems unlikely, but as Hartley teases, it looks like they are eluding to that to be Jordan’s endgame.

Do you think Rafe and Jordan will reunite? Will Rafe and Hope break up? Don’t forget to come back for more Days of Our Lives (DOOL) spoilers, news, and casting updates!

General Hospital Spoilers: Molly Freaks At Sam For Cozying Up To Shiloh