General Hospital Spoilers: Michael And Sasha Heat Up On Sonny’s Island – Romance Is In The Air! 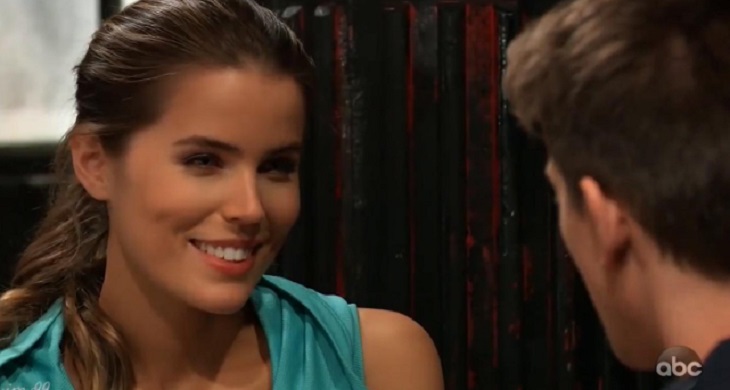 As General Hospital viewers can tell, Michael and Sasha are doing a slow burn in the romance area but steadily appearing to become more and more serious; Sasha made a decision to stay in Port Charles permanently, and has already told Valentin Cassadine (James Patrick Stuart) and Nina Reeves (Cynthia Watros) that she is moving out of Wyndemere and plans to get her own place. So Michael and Sasha aren’t quite to the point of moving in, but they are spending every spare moment together!

General Hospital viewers will recall that Sonny Corinthos (Maurice Benard) owns an island where he and Carly Corinthos (Laura Wright) as well as Jason Morgan (Steve Burton) and Sam McCall (Kelly Monaco) have gone to over the years, either on vacations or occasionally to hide, if there was a problem with a mob war and the like.

Sonny’s taken the family there on occasion also, and he’s owned the island for quite some time. Any Corinthos family member has access to it, and maybe this is where Michael and Sasha are going. Michael had also mentioned an island other than Sonny’s in recent weeks that he had to go to for business reasons and had mentioned taking Sasha to it as well, so they could either be spending time there as a working vacation for Michael or they could be going to Sonny’s island.

General Hospital Spoiler – Sonny Corinthos And Carly Corinthos Like Sasha, And Josslyn Jacks Does Too

Sonny and Carly have made it known that they like Sasha, and have trusted her enough to spend time in their home with Michael, caring for Avery Corinthos (Ava and Grace Scarola) on occasion and Joss can use a big sister figure around too. Michael and Sasha were babysitting Avery in the recent General Hospital episode where Josslyn decided to go to Franco and Elizabeth Baldwin’s (Roger Howarth, Rebecca Herbst) wedding reception onboard the Haunted Star, when Michael had made her a big ice cream sundae which he wound up having to eat himself while Sasha opted for popcorn!

Michael has gone through a lot in the last few months, much of it being part of “Wiley’s Army” and helping protect his godson Wiley Cooper-Jones (Eric and Theodore Olson) from the evil Shiloh Archer (Coby Ryan McLaughlin). Plus his son Jonah Corinthos, who he does not yet know is really Wiley, would be one year old and he can’t help but wonder what Jonah would be like now, had he not “died.”

His birth mother Nelle Benson (Chloe Lanier) has also been making herself a problem and he recently had to deal with a jailhouse visit with her, where she reminded him of his loss and grief.

Michael came clean to Sasha about something the same day as the visit to Nelle too, which could have either been his feelings for her or he explained his history with Nelle and their baby.

He also couldn’t help but be affected by the death of his young cousin Oscar Nero Quartermaine (Garren Lake Stitt), helps support Joss in her grief, and helped get his other sister Kristina Corinthos-Davis (Lexi Ainsworth) to see the light about Shiloh, with the help of friend Willow Tait (Katelyn MacMullen). So it’s high time that Michael took some “me time” and having Sasha with him is just the icing on the cake!

The Young and the Restless (YR) Spoilers: Adam And Nick War Heats Up – Christian Pays The Price