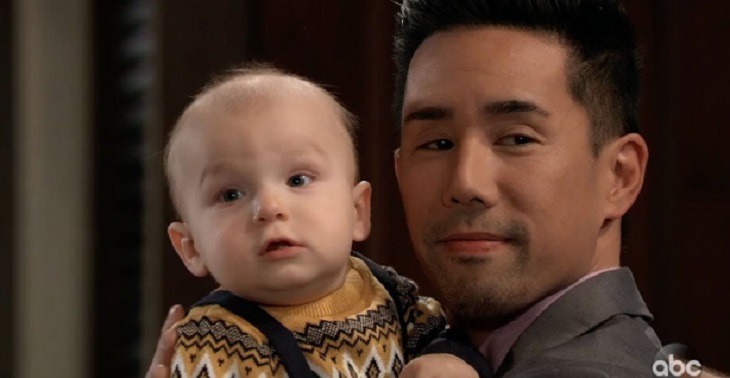 General Hospital spoilers tease that Wiley Cooper-Jones (Eric and Theodore) might be kidnapped before the custody fight Shiloh Archer (Coby Ryan McLaughlin) initiated has come to its conclusion!

In a recent General Hospital episode, Shiloh stole a burp cloth that Brad Cooper (Parry Shen)had used which of course would have some DNA from Wiley on it, with the intention of testing the baby’s DNA against his own. Of course, as General Hospital viewers know, it won’t match, which actually could be in Brad and Lucas Jones’ (Ryan Carnes) favor; but then the problem will come in that Shiloh might either blow up at Willow Tait (Katelyn MacMullen) for having cheated on him.

Of course a quick cover story could be constructed if anyone thinks ahead enough to say the tests are wrong or altered– but then Shiloh himself might come to that conclusion himself.

The cover story would be mainly for Willow so that she won’t get upset necessarily. But no matter how many DNA tests are altered and how many cover stories are constructed, the fact remains that the baby originally put up for adoption by Willow and fathered by Shiloh is not the baby Brad and Lucas have now; that’s Jonah Corinthos, Michael Corinthos’ (Chad Duell) son with Nelle Benson (Chloe Lanier)!

If the truth about the baby switch doesn’t come out and Shiloh continues to believe that Wiley is his son, Wiley could be in danger of being kidnapped by Shiloh or he might put up a Beecher’s Corners “Dawnie” up to the task!

General Hospital viewers will recall that when Brad visited Nelle in Pentonville Prison a couple of weeks ago, disguised as a deliveryman, he showed her some pictures of Wiley he had on his phone; Nelle made it perfectly clear that once she was paroled (which is probably not going to happen, it’s more likely to be a jailbreak and possibly with Ryan Chamberlain (Jon Lindstrom) tagging along and possibly Harmony Miller (Inga Cadranel) as well) she wants to be a bigger part of her baby’s life!

She will still want him away from Michael and the Corinthoses as well; and it’s quite possible that since Harmony is her cellmate she might find out about Shiloh and that he’s the birth father. It would be just like Nelle to make a deal with Shiloh through Harmony, and kidnap Wiley/Jonah and then try to doublecross Shiloh and run off to parts unknown with Wiley and maybe Ryan tagging along with her; after all, they two developed quite a bond over their stolen kidneys and hatred for certain Port Charles residents!

Will the truth come out before Nelle or Shiloh has a chance to kidnap Wiley/Jonah?