General Hospital Spoilers: Laura Puts Herself In Danger, Digs Into Past For Proof Of Ryan’s Death? 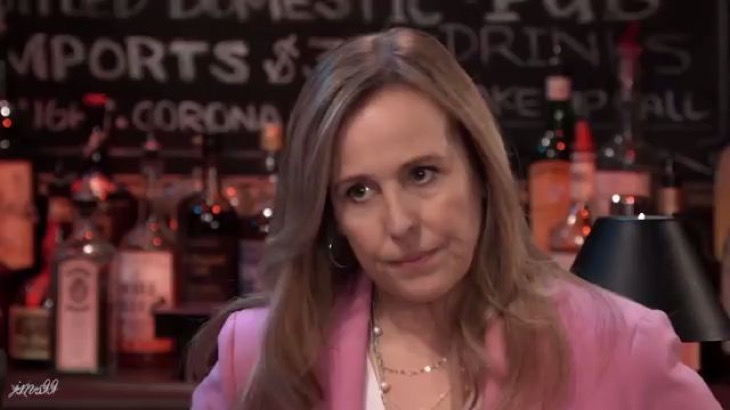 General Hospital spoilers tease that Laura Webber (Genie Francis) may start wondering why two of the recent serial killer crimes were against members of the media who were doing projects on the Ryan Chamberlain (Jon Lindstrom) murders of the past. This seems to be a connection the police have overlooked, and even though Franco Baldwin (Roger Howarth) is currently in jail for the crimes awaiting trial, he really got her to thinking about Kevin’s bizarre behavior when she visited him in jail.

He told her if Kevin wrote in the most recent therapy notes that Franco’s killer instincts had returned, then Kevin was not the Kevin he knew….not Kevin not acting like the man he knew, but the way he phrased it as not being the man he knew obviously set a light bulb off in Laura’s brain!

Laura was on the run with Luke Spencer (Anthony Geary) during part of the time that Ryan’s original reign of terror took place between 1992 and 1995 when he supposedly was killed in a gas explosion in a funhouse. She was also kidnapped by Frank Smith (then played by Mitchell Ryan) in 1994, so although she probably knew of the serial killings and heard of Ryan’s presumed death, she was not involved with either Kevin or Ryan personally during that time and may not have known Kevin then.

She did, however, know of Kevin’s breakdown not too long after Ryan’s “death” when Kevin thought he was Ryan and had stalked and kidnapped Felicia Scorpio (Kristina Wagner). This was during the time he was involved with and later married to Lucy Coe (Lynn Herring), who was able to help Kevin get treatment, and Felicia dropped the charges when it was shown Kevin wasn’t in his right mind.

But will Laura continue to think Kevin’s had another breakdown and thinks he’s Ryan, or will she take her thoughts further and wonder if Ryan is really dead? Even if Kevin thinks he’s Ryan, the last time it happened he didn’t impersonate himself, so this is different! The divorce isn’t finalized, so one thing she could do is try to have Kevin judicially committed, which could get him to put in Ferncliff and lead to the real Kevin being found and freed; but a judicial commitment requires proof of a person being a danger to themselves or others!

However, she could dig deeper into the history between Ryan and Kevin, and find the same information that Peyton Mills (John Patrick Jordan) did, which got him killed; namely, nobody or remains were ever found of Ryan Chamberlain! Kevin at one time during his time on the spin-off series “Port Charles” did have an urn that he said contained Ryan’s ashes, but obviously that’s not what was in the urn since now we know Ryan’s been alive all this time! Stay tuned to GH and keep checking General Hospital spoilers frequently to see whether Laura operates on the basis of Kevin thinking he’s Ryan or searching for proof that Ryan never died to begin with!

Bold and The Beautiful Spoilers: Sally Gets A Surprise, Will Wyatt Propose?

Bold and the Beautiful Spoilers: Hope Wants To Set Liam Free, He Fights To Save His Marriage