General Hospital Spoilers: Sonny Takes Matters Into His Own Hands, Tracks Down Dante? 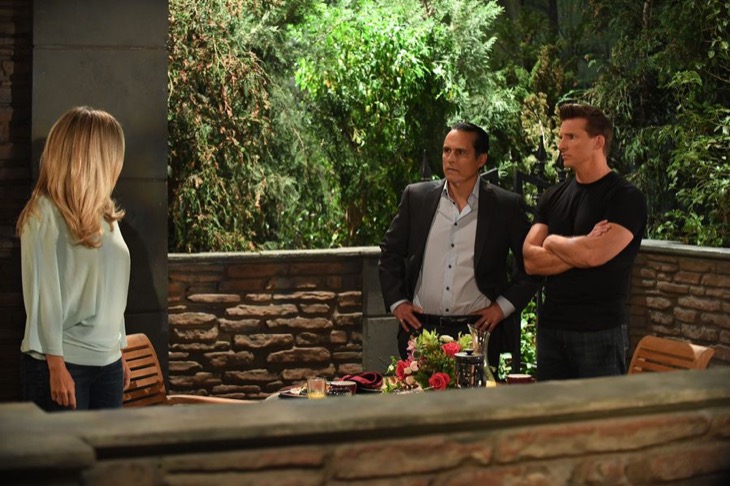 General Hospital spoilers tease that Sonny Corinthos (Maurice Benard) will take matters into his own hands and run into some danger: could he decide to bypass the WSB and try to track down his son Dante Falconeri (Dominic Zamprogna)on his own?

That would be very dangerous for both Sonny and Dante, considering he’s in deep cover and Sonny or his men could blow his cover and get him killed! For that matter, Sonny himself or his men could get killed as well! Ironically, Dante was drafted by the WSB to capture a criminal who had attacked Lulu before, Raj Patel (Noshir Dalal)!

Still, Sonny is desperate to contact Dante and let him know about what’s been happening in Port Charles since he left; that there has been a serial killer in town, who has taken three previous lives and attacked his wife, Lulu Falconeri (Emme Rylan)! He knows Dante would be in Port Charles in a flash if he knew, and if he could!

Lulu and the kids need Dante more than ever now, although both grandmas, Laura Webber (Genie Francis) and Olivia Falconeri (Lisa LoCicero) have stepped up for Rocco (O’Neill Monahan) as well as Valentin Cassadine (James Patrick Stuart), Nina Reeves (Michelle Stafford) and Laura as well for Charlotte (Scarlett Fernandez) while Lulu has been incapacitated, recovering in the hospital.

This could be a dangerous operation indeed if that’s really what Sonny has in mind concerning taking matters into his own hands; other General Hospital spoilers tease that he does find Dante and breaks him out of a foreign prison and brings him back, and others tease that Dante may be dead, and still others tease that Dante gets back to Port Charles, but Lulu divorces him over all this! There could be many outcomes to Sonny’s mission to bring Dante back. Stay tuned to GH and keep checking General Hospital spoilers frequently to see if and when Dante does return to Port Charles, and what will happen with Dante and Lulu if and when he does!

Days Of Our Lives Spoilers: Will and Sonny Celebrate A Romantic Valentine’s Day With Gabi’s Help