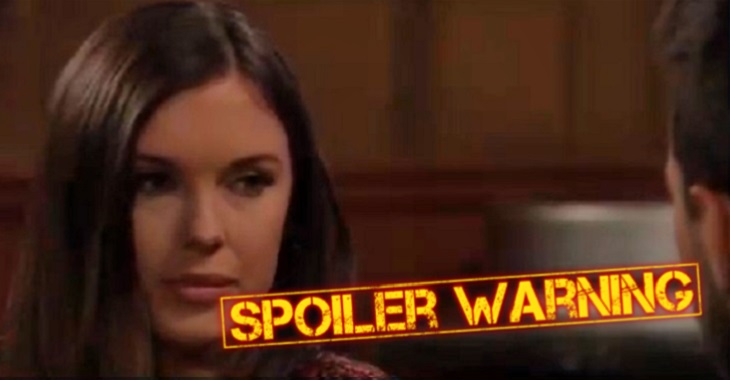 “General Hospital” spoilers for Monday, February 18, tease that Dr. Neil Byrne (Joe Flanigan) will bump into a flustered Alexis Davis (Nancy Lee Grahn). She’ll try to deal with the awkwardness of this encounter and move on, but it’s clear that Alexis’ new therapist makes her nervous. Of course, that’s likely because there’s some attraction going on, which could definitely complicate things between them.

Dr. Kim Nero (Tamara Braun) will also have a chat with Alexis during Monday’s episode. She’ll fill Alexis in on the latest Oscar Nero (Garren Stitt) developments and share how she’s doing. Alexis really feels for Oscar and his family, so she’ll assure Kim she’s there for her if she needs anything.

Elsewhere, Harrison Chase (Josh Swickard) will grow suspicious of Willow Tait’s (Katelyn MacMullen) connection to Brad Cooper (Parry Shen). He’ll sense that there’s some sort of problem, but Willow may pretend everything’s fine or offer a bogus excuse. Willow is starting to trust Chase, but she still has certain secrets she needs to keep.

Other GH spoilers say Lulu Falconeri (Emme Rylan) will get quite a surprise. Charlotte Cassadine (Scarlett Fernandez) and Nina Reeves (Michelle Stafford) will welcome Lulu home with a sign and balloons. Unfortunately, Lulu’s pretty jumpy right now. She’ll look terrified when Nina and Charlotte pop out of nowhere, so they’ll undoubtedly apologize for giving her a fright.

Over with Franco Baldwin (Roger Howarth), he’ll attempt to put his foot down. Franco will reject Jordan Ashford’s (Briana Nicole Henry) scheme and insist that he can’t confess to killing Kiki Jerome (Hayley Erin). He’ll feel like he loved Kiki too much to cross that line.

However, Jordan will note that by taking credit for the murders, Franco could help flush out Kiki’s killer. He could actually get justice for someone he cared about very much. Franco will be swayed by that, but he’ll still want to discuss this with Elizabeth Webber (Rebecca Herbst) first. They’re a team, so Franco won’t want to pitch in if Liz vetoes the suggestion.

“General Hospital” spoilers say Jordan will shut down that idea. She’ll contend that Franco has to hide this plot from everyone – including Liz. Franco will make the tough decision to deceive his new wife, so expect some bombshells later this week.

In the meantime, Ryan Chamberlain (Jon Lindstrom) will blast Dr. Kevin Collins (Jon Lindstrom) for deceiving him. He finally caught on about the prenup lie, so he’ll be furious. Ryan will snap that now he’ll have to deal with Kevin AND Laura Webber (Genie Francis). Little does he know Laura is hot on his trail! Laura will find Kevin at Ferncliff soon and manage to get herself locked up there, too.

It sounds like some chaos is ahead on “General Hospital.” We’ll give you updates as other news and rumors emerge. Stick with ABC’s GH and don’t forget to check Soap Opera Spy often for the latest “General Hospital” spoilers, rumors, updates and news.