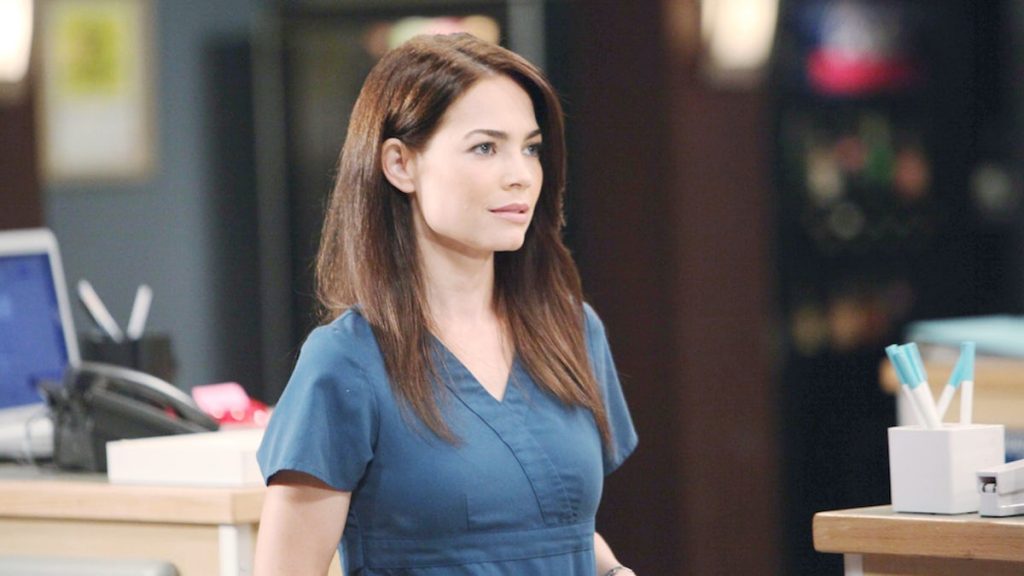 General Hospital (GH) spoilers tease that Kim Nero (Tamara Braun) can’t help herself when it comes to “Frankendrew”; she takes comfort in her past and the memories, personality, and actions of Franco Baldwin (Roger Howarth) combined with his constant pursuit of her is becoming too hard to resist!

As General Hospital viewers will recall, when Kim and Julian Jerome (William DeVry) first started dating, it was more of a friends with benefits, never expected to blossom into anything any more permanent; they both had baggage, hers from Drew Cain (formerly Billy Miller) and his from his ex-wife Alexis Davis (Nancy Lee Grahn)!

However, as time went on, they became closer and closer, and Julian moved on from Alexis and Kim thought she had moved on from Drew, especially since he didn’t remember her or their love, although they became close as co-parents to their son Oscar Nero Quartermaine (Garren Lake Stitt), especially after his brain tumor took over and he went through his final months of life, which after nearly a year, ended on May 1, 2019.

Kim’s tried to move past her grief for Oscar, after having some strange conversations with Drew up on Mount Kilimanjaro where she hallucinated that Drew was Oscar, but it was all chalked up to lack of sleep and side effects from medicines she was taking to combat altitude sickness at the time.

Then Kim Wanted to Have A New Baby

Then Kim decided that a new baby would make her feel better and fill the deep, black, hole of grief left by Oscar’s passing. First, she asked Julian but he declined, knowing it wouldn’t really make her feel the loss of Oscar less. Then she tried with Drew, including by drugging him onboard the Haunted Star which was luckily for Drew interrupted!

He knew what she did and forgave her, considering the extreme grief she has been experiencing – and him as well, as Oscar’s birth father – which, interestingly enough, the old Andrew Cain may not have been so gracious should something like that have happened! Drew Cain, of today and Andrew Cain pre-2012 (Steve Burton) are vastly different in personality and attitudes! Kim loves Drew of today more like a close friend, but the passion and the romance are just not there with “NewDrew”.

Then – “Frankendrew” Happened On General Hospital

Then – Franco Baldwin received a memory transfer from the flash drive with all of Drew’s pre-2012 memories on it, and not only did he get his memories, he got his personality and actions and attitudes! Plus he got all of his former passions and desire toward Kim!

Although she tried to avoid him at first, he has been pursuing her and they did have a talk about the past – he had written her letters for two years after he was deployed, and apparently they never got mailed for security reasons thanks to the Navy, since he was a Navy Seal. That is a possibility but for whatever reason she gave up on him because she never got them.

Kim has tried to rush Julian into the move they are planning to Manhattan to start a new life, but he has to close on his sale of Charlie’s Pub to Olivia Quartermaine (Lisa LoCicero) first and Kim had to sell her condo apartment as well. She already turned in her resignation at GH and referred all her patients to other ob/gyns. But it has been getting more and more difficult for her not to be drawn to the Andrew Cain that lives in memories, passion, pursuit, and personality inside Franco Baldwin’s body!

General Hospital spoilers say that Kim and Franco/Frankendrew will kiss passionately in Oscar’s Meadow, and unfortunately, Franco’s stepson Cameron Webber (William Lipton) will see it! Cameron will want to tear the two of them off each other and give them a good “shame on you!” among perhaps other choice words that would make his mother, Elizabeth Baldwin (Rebecca Herbst) want to wash his mouth out with soap!

If Frankendrew and Kim continue down this path, she will probably wind up cheating on “Charlie” with him; viewers will recall psychic Chelsea Lam’s (Jen Ray) words that Julian would not leave Port Charles!