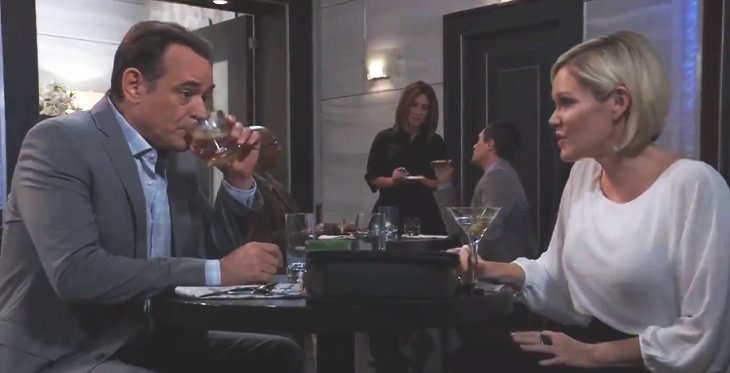 General Hospital spoilers tease that Dr. Kevin Collins (Jon Lindstrom) will get bad news this week on General Hospital. This could relate to Curtis Ashford’s (Donnell Turner) updates on his search for Kevin’s psychotic twin, Ryan Chamberlain (Jon Lindstrom). It may mean that the trail has gone cold.

General Hospital viewers could expect that Kevin would rather have Ryan be found. Whether it be certifiably dead, or alive and captured, than proceed with the fake romance plan with Ava Jerome (Maura West).

He’s doing it to lure Ryan to Port Charles to be captured. Kevin would rather no one would be endangered by his brother again. He blames himself for the three deaths and two near death attacks perpetrated by Ryan.

On the other hand, bad news for Kevin could mean that Curtis’ update involved some success. It could mean he either found the woman who was helping Ryan, or got some security tape from the pharmacy that was robbed and was able to identify Ryan himself.

If Curtis found that Ryan is still alive and it’s provable, then that could be bad news for Kevin. It would mean Ryan would be still alive. He could be lured into Port Charles and wreak more havoc if their plan backfires!

General Hospital previews for Monday show Kevin and Ava having drinks and discussing some possibly negative attention to themselves that Ava considers good attention. As she tells Kevin, any attention is good attention if it gets Ryan back to Port Charles.

General Hospital Spoilers – Will Lucy Coe Have An Outburst?

Other General Hospital spoilers tease that Lucy Coe (Lynn Herring), Kevin’s ex-wife, has her eye on Kevin, and she’s already made a scene and a spectacle of herself seeing Kevin and Ava together before. But of course Lucy is not in the loop of what is going on.

In that sense, if Lucy comes over and makes an embarrassing scene again about Kevin and Ava being together, Kevin could certainly consider Lucy and her inappropriate attentions and public outbursts to be bad news as well.