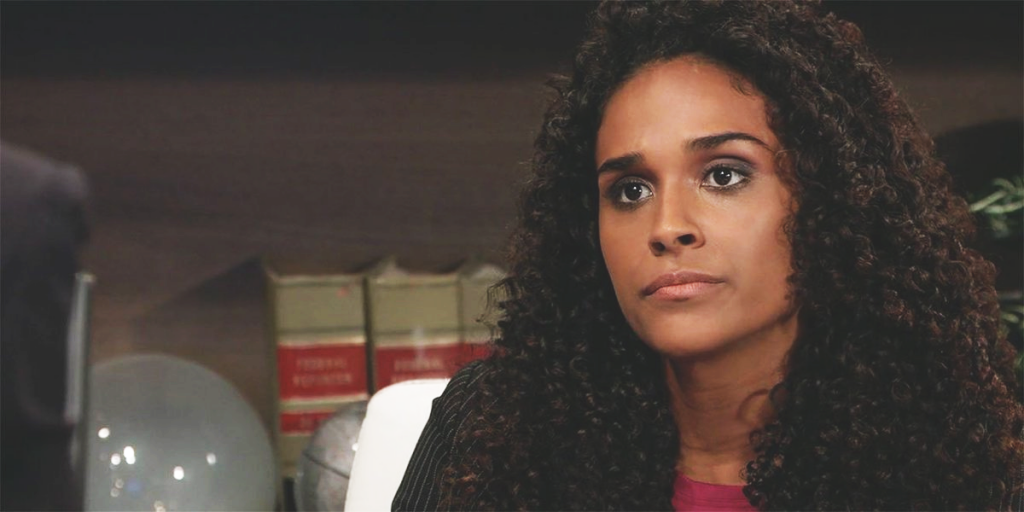 General Hospital spoilers tease that Commissioner Jordan Ashford (Briana Nicole Henry) will speak of Franco Baldwin’s (Roger Howarth) heroism at his competency hearing. The hearing will determine whether he remains pre-2012 Andrew Cain (Steve Burton) in his mind, or has a chance at returning to himself with Dr. Andre Maddox (Anthony Montgomery) attempting to reverse the memory transfer.

As General Hospital viewers will recall, Franco is actually twice a hero. He risked his life  to save his stepson Cameron Webber’s (William Lipton)  by taking his place when Shiloh Archer (Coby Ryan McLaughlin) kidnapped him and Dr. Arthur Cabot (Time Winters) was to transplant Drew’s memories into him. Franco also risked his life by helping expose Ryan Chamberlain (Jon Lindstrom) when he perpetrated his crime spree last fall.

Viewers will recall he was stabbed in the stomach. Then he made it all the way from Ferncliff to Elizabeth Baldwin’s (Rebecca Herbst) home on foot. And he nearly bled out by the time he got there! The fact that the Port Charles Police Commissioner speaks highly of Franco’s heroism and who he really is should speak volumes as to why he deserves a chance to be himself again. That is quite a big step for someone who once was a serial killer himself. His actions were influenced by a brain tumor and it took years of proving himself to the police, society, and Port Charles in general.

Attorney Martin Gray (Michael E. Knight) will likely try to discredit Franco’s heroism by focusing on his serial killer past. He could possibly bring in a medical expert who will testify that the removal of a brain tumor cannot reform a killer.

But the transfer of the memories and personality of a decorated Navy Seal could, and he’ll focus on the danger Franco may become if he has his own memories and personality back in his brain. Scott Baldwin, (Kin Shriner) will counter with precedents showing that brain tumors in a location in the brain that does control impulses, have been a factor in past murder cases.

Jordan will continue to advocate for Franco. She will likely admit that at first she didn’t buy the changes in Franco either. But she would have never enlisted him in exposing Ryan Chamberlain and proving he was impersonating his twin if she didn’t believe that Franco had changed.

General Hospital Spoilers: Epiphany Maintains The Peace — Can She Get Liz And Kim To Get Along? https://t.co/VlX1VO8iQ4 pic.twitter.com/UDegL4XvrF

She may also bring up the real Drew Cain (Billy Miller) and what kind of a man he had been after he learned who he was. Drew was much different than his own twin, Jason Morgan (Steve Burton) whose memories he had been implanted with. Undoubtedly, Dr. Andre Maddox (Anthony Montgomery) will also testify at this hearing. He will explain the memory transfer procedure and how it works. Then he will try to convince the judge that it’s not just a bunch of science fiction mumbo-jumbo.

However, Andre would also have to speak of the risks of what he intends to do. So it may actually not be in Scott’s best interests to call him as a witness. Stay tuned to General Hospital and keep checking General Hospital spoilers frequently for all the latest news, updates, and developments!