General Hospital Spoilers: Is There Any Hope For Oscar? 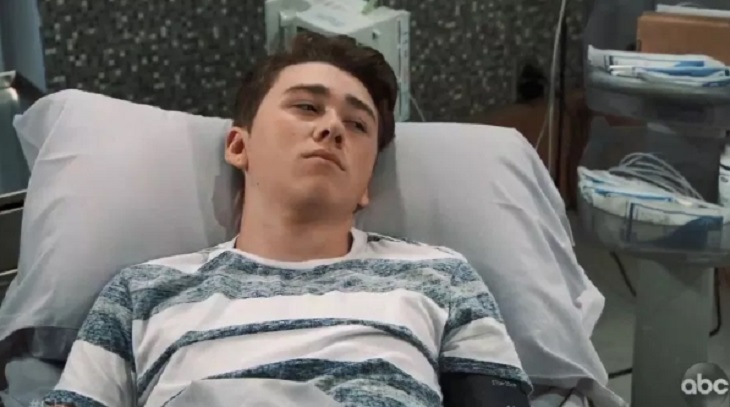 General Hospital spoilers say that unfortunately the trial Oscar was participating in was unsuccessful, much to his mother’s dismay.

There are widely varying opinions among General Hospital fans as to whether the Oscar and Josslyn Jacks (Eden McCoy) romance story could be a modern-day remake of the Stone Cates (Michael Sutton) and Robin Scorpio (Kimberly McCullough) tragic storyline where Stone dies of AIDS, and Robin contracted HIV from him.

Some fans are sure Oscar’s death will be the outcome, while others think it’s just a vehicle to get his parents, Kim and Drew Cain (Billy Miller) together, or provide an entertaining teenage triangle between Oscar, Joss, and Cameron Spencer (William Lipton)! However, if Alexis is going to run into Oscar somewhere, he’s more than likely going to be running around himself, out of the hospital!

Then there’s the question, where will Oscar go when he gets out of the hospital? Will he return to Charlie’s Pub, work as a busboy and live at the Dawn of the Day cult house, or will he return to school and his mother’s apartment?

Charlie’s Pub and the cult house both offer opportunities for Alexis to run into him. She’s at Charlie’s Pub frequently (as is most of Port Charles, since it’s the only place that hasn’t had a victim of the serial killer found at it, other than Kelly’s).

It’s entirely feasible for Alexis to go check up on her daughter Kristina Corinthos-Davis (Lexi Ainsworth) at the Dawn of the Day cult house if Jason Morgan (Steve Burton) and/or Sam McCall (Kelly Monaco) reported back to her about the situation there and Kristina’s moving in there.

Bold and The Beautiful Spoilers: Bill Finds Love In 2019, Will He Give Up On Brooke?

Young and The Restless Spoilers: Phyllis Goes Too Far – Newman’s Turn Against Her