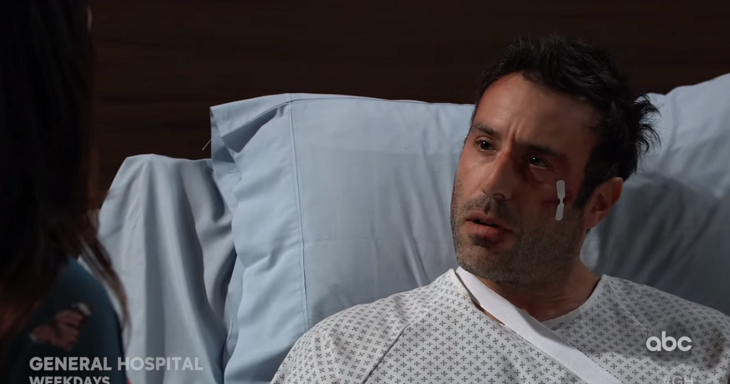 General Hospital (GH) spoilers indicate that even though Shiloh Archer (Coby Ryan McLaughlin) might be down and out right now, nothing is going to stop him from what he does best: and that’s play mind games with other people. As a matter of fact, Shiloh is in control, despite what other people may think. Here’s what you need to know.

Both Sonny Corinthos (Maurice Benard) and Jason Morgan (Steve Burton) think that they have Shiloh cornered, but that doesn’t seem to be the case at all. Sure, they might have threatened Margaux Dawson (Elizabeth Hendrickson), but Shiloh thinks that he has her just where he wants her.

Even though Margaux isn’t the kind of gal that can be easily persuaded, Shiloh is facing some serious criminal charges. If he doesn’t manage to wiggle his way out of this current situation, he might face a very long time behind bars.

General Hospital spoilers indicate that Shiloh might be safe. That’s because a lot of people still believe that Baby Wiley actually belongs to him and Willow Tate (Katelyn MacMullen).

As a matter of fact, Willow’s mother Harmony Miller (Inga Cadranel) might be the saving grace that Shiloh needs right now, as she’s about to come up with a plan but unfortunately betrays her daughter at the same time. Willow might have to be careful with how much information she gives her mother.

That’s because it’s pretty clear that Harmony is still brainwashed by Shiloh and his controversial cult, Dawn of Day. For her, Shiloh is the most important person on this planet.

General Hospital Spoilers– Will Shiloh Get To Wiley?

Meanwhile, there are several other people in Port Charles including Alexis Davis (Nancy Lee Grahn) and Sam McCall (Kelly Monaco) who are willing to do whatever it takes to make sure that Baby Wiley is kept as far away as possible from the dangerous and deranged Shiloh.

But that might not be easy. Shiloh is the kind of many who gets what he wants. Of course, all of this will change the moment Baby Wiley’s real biological mother Nelle Benson (Chloe Lanier) makes her way back to town. It’s going to be a showdown you won’t want to miss!

The Bold And The Beautiful Spoilers: Liam Fights For Hope — Can Their Love Survive Thomas’ Manipulation?