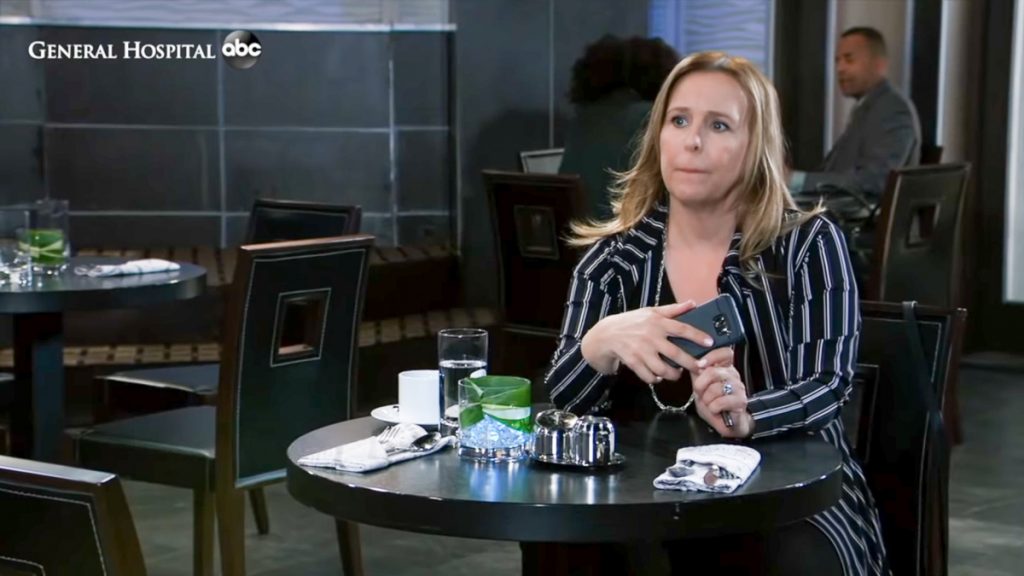 General Hospital spoilers tease another exciting cliffhanger Friday for October 25th’s episode as GH fans get ready for November sweeps to begin in another week!

Lulu Spencer (Emme Rylan) brings Dustin Phillips (Mark Lawson) a sexy surprise at work, when apparently school duties keep him from keeping a date with her! She smiles slyly as she holds up what appears to be a black lace number and tells him she brought their date to him! They should hope the janitor or another teacher, or god forbid a STUDENT doesn’t have a key to the room they decide to use for their extra-curricular activities! Hold up there a minute, Dustin – check the school calendar – is it a game night?! 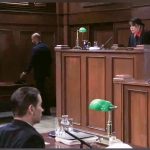 Lucy Coe (Lynn Herring) approaches Maxie Jones (Kirsten Storms) and Peter August’s (Wes Ramsey) in front of the Crimson offices and tells them she is about to make their dream come true! Lucy, who is currently involved in real estate as a living may have found them their dream house! However, Peter looks a little nervous – is he afraid his dream might turn into a nightmare before they can move into their dream house?

Valentin Cassadine (James Patrick Stuart) has a friendly warning for Laura Collins (Genie Francis) as they stand in front of what appears to be Kelly’s. He might be talking to her about Jasper Jacks (Ingo Rademacher) and his investigation and file on him when he asks her if she’s aware of the hell he’s trying to raise; or has he heard something about some trouble that Spencer Cassadine (Nicolas Bechtel) is trying to make that even his grandmother hasn’t heard about? She looks a little too concerned for this to be about Jax and his file on Valentin!

Meanwhile, at the courthouse where Franco Baldwin’s (Roger Howarth) competency hearing is taking place, it’s Dr. Kevin Collins’ (Jon Lindstrom) turn to testify. Scott Baldwin (Kin Shriner) points to Franco and asks him if that man is in complete control of his faculties; will Kevin say that Franco is delusional and believes he is pre-2012 Andrew Cain (Steve Burton)?

This situation is a little different than being under a delusion, and Martin Grey (Michael E. Knight) might point that out when he cross-examines Kevin! Martin might even play dirty like he did with Elizabeth Baldwin’s (Rebecca Herbst) past and bring up with Kevin thought he was his twin brother Ryan Chamberlain (Jon Lindstrom) twenty something years ago – and likely for the same reason; Kevin and Ryan were “Patients Three and Four” in the memory transfer studies!

In the questioning room likely in Pentonville Prison, Diane Miller (Carolyn Hennesy) talks to Jason Morgan (Steve Burton) and Sam McCall (Kelly Monaco), who doesn’t look like she’s slept much lately. She tells them she has an option that could speed up the process; hopefully she’s not been backed to the wall so badly that she suggests Sam should take a plea bargain! That would not be acceptable at all!