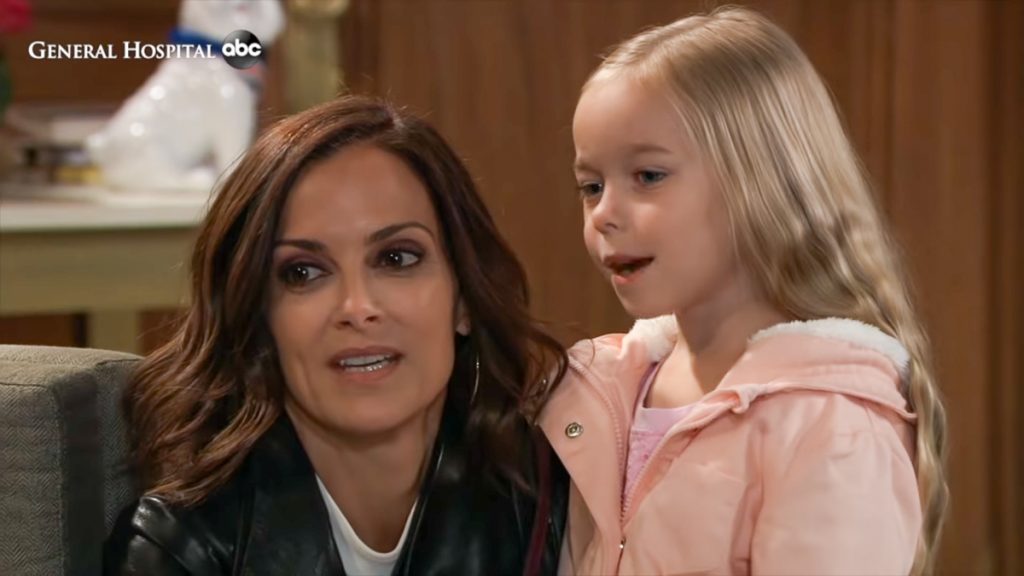 General Hospital spoilers tease that Friday, November 15th’s episode will be another exciting one for GH viewers! Bear in mind that the second installation of the Trump impeachment hearings will be aired on Friday, and that your GH may again be pre-empted. Watch for news as to whether they are pushing it out to Monday or showing it on abc.com.

Sonny Corinthos (Maurice Benard) has some rather stern advice for Cameron Webber (William Lipton) as his mother Elizabeth Baldwin (Rebecca Herbst) brings him over to the Corinthos home, likely to apologize to Sonny for stealing his liquor Halloween night. Sonny acts like he’s trying to scare Cameron straight, so to speak, as he gets loud and in Cameron’s face as he tells him, “You know what? It’s the SAFE choice!” Cameron is just lucky no one told his community service officer that he was drinking underage, or his community service and probation would have been down the tubes!

GH Spoilers – Violet Barnes-Finn Has A Question For Anna Devane

At Anna Devane’s (Finola Hughes) house, she walked in on quite the sight after not seeing her fiancé, Dr. Hamilton Finn (Michael Easton) for six months! There as big as day was Finn, his ex-fiancée Hayden Barnes, (Rebecca Budig) clad only in one of Finn’s shirts, sitting on her couch as she comes into her house, and all of a sudden this little blonde cutie comes up to Anna and asks if she’s one of her daddy’s friends!

Anna should have let Robert Scorpio (Tristan Rogers) give her that warning at the PCPD about something she really needed to know! Perhaps little Violet Barnes-Finn (Jophielle Love) will invite Anna to her next tea party with her stuffed animals! However, after the cuteness fades, Finn will have a lot of explaining to do!

Julian Jerome (William DeVry) wants Alexis Davis’ (Nancy Lee Grahn) help as he visits her in her hospital room at General Hospital. Little does he realize he has found a vital clue to the mysterious illness that Alexis is suffering from and has not yet been diagnosed! He thinks Olivia Quartermaine (Lisa LoCicero) is putting dead rats around Charlie’s Pub to scare away customers and asks Alexis to do something about it! The reality is, the rat died from the poisoned nutritional supplement that Kendra Lennon (Michelle Argyris) ditched in the dumpster behind Charlie’s Pub!

Monica Quartermaine (Leslie Charleson) has good wishes for Kim Nero (Tamara Braun) and Franco “Frankendrew” Baldwin (Roger Howarth) as they prepare to leave Port Charles together. As General Hospital viewers will recall, Franco now believes he is pre-2012 Andrew Cain (Steve Burton) since the memory transfer of Drew Cain’s (Billy Miller) memories from the flash drive that Shiloh Archer (Coby Ryan McLaughlin) had stolen. Kim and Monica have been taking Drew anyway they can get him, since the real Drew has been declared dead by the Navy and his remains have never been found. Monica tells Kim to promise her that they will have happy lives.

Meanwhile, Drew’s twin, Jason Morgan (Steve Burton) talks to “Frankendrew” about his decision to leave town with Kim Nero or to stay in Port Charles and pursue regaining his Franco memories. Jason understands the dilemma, telling him that whatever he chooses, someone he cares about loses! But some of Franco is starting to bleed through as well, so it will be a difficult decision. Either “Drew” loses himself forever or Franco does, and so do Kim and Liz and her family!