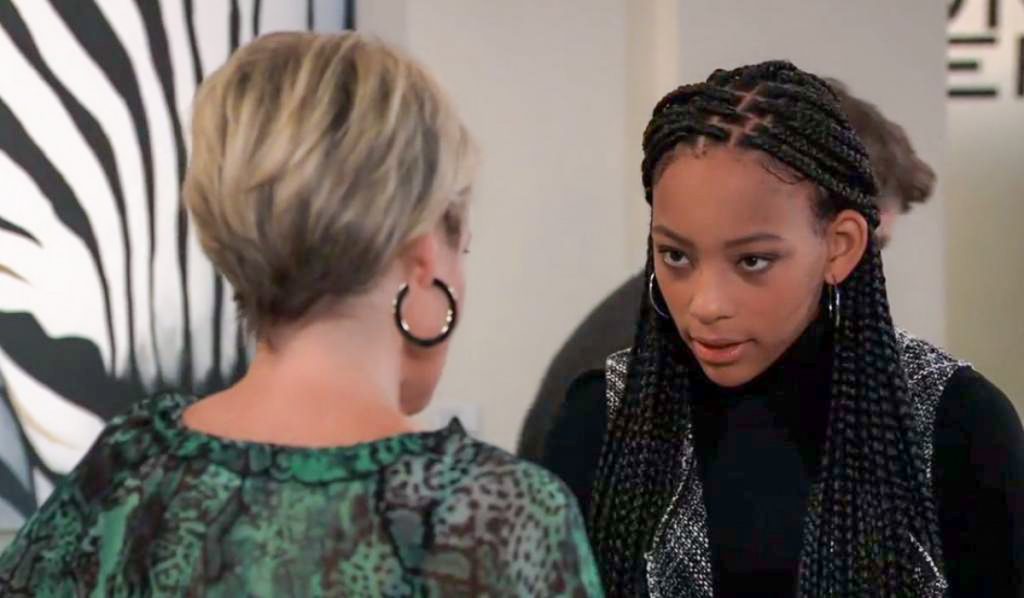 At Ava’s art gallery, where the art auction has just concluded, Trina Robinson (Sydney Mikayla) makes a discovery in the storage room! She spots Nikolas Cassadine (Marcus Coloma) trying to hide and she demands of him, “Who are you and what are you doing here!” He can’t tell her he’s Charlotte Cassadine’s (Scarlett Fernandez) bodyguard, because she’s just jumped off the pier expecting him to materialize!

GH Spoilers – Valentin Cassadine Wins, But Not Like You’d Think!

Meanwhile, inside the art gallery in the showroom, Valentin Cassadine (James Patrick Stuart) smirks as Nina Reeves stands behind him and smiles with a sly look, probably to her “partner in crime” Ava Jerome (Maura West)! The portrait of Helena Cassadine (Constance Towers) seemed to spontaneously combust just after Laura Collins (Genie Francis) put down the winning bid! However, Nina could also be smiling at Jasper Jacks (Ingo Rademacher) who also smiles as he looks towards Valentin and Nina while Laura looks shocked! Valentin knows he has won even though the portrait is destroyed, because now he thinks there is no more codicil to find and proclaims, “Now the portrait is gone, and all of its many secrets!” Unless the codicil was in the frame, which was removed, or the portrait was a fake – paintings on canvas don’t burn like that one did! It consumed and collapsed more like wrapping paper!

Ava Jerome obviously has a secret as she slyly smiles and asks someone, “Why would I do a thing like that?!” Ava and Nina cannot be done punishing the Cassadine men this quickly, there has to be more to it than the portrait exploding and supposedly destroying the codicil to Mikkos Cassadine’s (John Colicos) will, which would disinherit Valentin! Valentin is clearly duped – so who might be asking Ava a question like that? Perhaps Laura, or maybe Jax? General Hospital fans will have to tune in tomorrow to learn the answer to that question!

At General Hospital, Peter August (Wes Ramsey) talks to Anna Devane (Finola Hughes) about Franco Baldwin (Roger Howarth) who unbeknownst to them, is waking up in his hospital room where Dr. Andre Maddox, (Anthony Montgomery) Elizabeth Baldwin (Rebecca Herbst) and Cameron Webber (William Lipton) rushed to, leaving Peter and Anna by themselves. Anna may be asking about his Invader article that he tells her he is doing on Franco and the memory mapping, as he gives her an answer, “That all depends on who Franco is when he wakes up.”

At the pier, close to the Harbor Master’s office, Rocco Falconeri (O’Neill Monahan) is shocked as Charlotte jumps off into the harbor after trying to wish her “bodyguard” Nikolas to appear to save her! Nikolas is otherwise occupied at the art gallery after being spotted by Trina, but Dustin Phillips (Mark Lawson) tears off his coat to dive in and rescue her as Lulu Spencer (Emme Rylan) gasps and Dustin tells her to call 911!

The Bold and the Beautiful Spoilers Tuesday, December 17: Thomas Changes Tactics – Zoe’s On Board With Liam & Steffy’s Plan