The Bold and the Beautiful Spoilers Tuesday, December 17: Thomas Changes Tactics – Zoe’s On Board With Liam & Steffy’s Plan 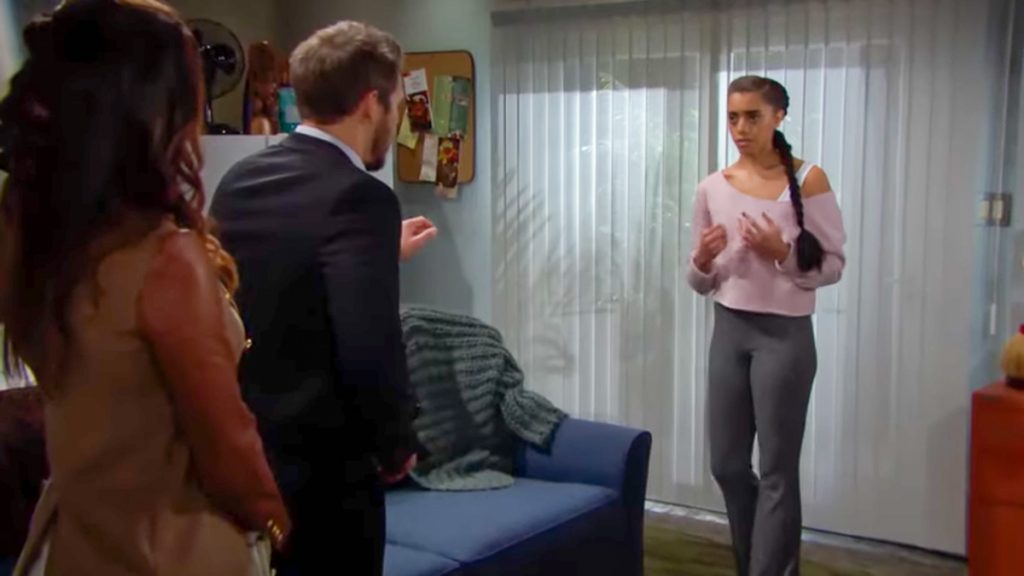 The Bold and the Beautiful spoilers for Tuesday, December 17, tease that Thomas Forrester (Matthew Atkinson) will take his plot to get Hope Logan (Annika Noelle) all to himself in a different direction. As B&B viewers know, Thomas wanted Hope to enlist his help as lead designer on Hope For The Future, so that they could work closely together on the upcoming fashion showdown.

And even though Hope considered Thomas’ proposal that they work together on the line, she ultimately turned down his request. Hope just didn’t want to work closely with Thomas, and Liam Spencer (Scott Clifton) was vehemently opposed to the idea as well. They both think (correctly) that Thomas is still obsessed with Hope and wants her for himself.

Well, Thomas is keenly aware of what Hope and Liam think, so he’ll decide to switch gears and do the unexpected. B&B spoilers indicate that Thomas will reason that Hope might change her mind and decide to work with him after all if she comes to believe that he’s no longer after her. And so Thomas will decide to make it look like he’s now romantically pursuing another woman.

Specifically, Thomas will start pursuing Zoe Buckingham (Kiara Barnes). As B&B viewers know, Thomas has had Zoe on the back burner for quite a while now. He’ll apparently not only pursue her but also make sure that Hope knows that he’s pursuing her. Ongoing B&B spoilers say that Thomas will stage a romantic dinner for himself and Zoe, then he’ll make sure that Hope knows about it.

Of course, the master plan from Thomas’ perspective will be for Hope to think that he’s “safe” to work with now that he’s interested in someone new. It will be yet another scheme to get closer to Hope, and ongoing spoilers say that it will eventually work, and Hope will agree to work with Thomas on Hope For The Future.

Meanwhile, on Tuesday’s new episode of B&B, Steffy Forrester (Jacqueline MacInnes Wood) will dig in her heels. As B&B viewers know, Liam has just proposed that Steffy rehire Zoe at Forrester Creations. Steffy’s dead set against the idea, but Liam’s got a plan. He’ll explain more on Tuesday’s episode to a skeptical Steffy and Zoe.

Of course, Steffy is still really peeved at Zoe for keeping the Beth Spencer (River Davidson and Madeline Valdez) secret to protect her father, Reese Buckingham (Wayne Brady). That’s not something that Steffy will easily forgive, and she can’t fathom actually working with Zoe again. But then again, there’s a part of her who knows that Liam’s plan might work.

Liam thinks that if Zoe comes back to work at Forrester Creations, she can be closer to Thomas and get all the dirt on him. Thomas has opened up to Zoe in the past, and Liam thinks that he might do so again. Well, ongoing B&B spoilers say that Steffy will indeed rehire Zoe in the coming days, and that Zoe will agree to get on board with Liam’s plan to expose Thomas’ true motives.

And that will put Zoe and Thomas in an interesting position. Thomas will be using Zoe romantically in order to get Hope to agree to work with him on Hope For The Future, and Zoe will be using Thomas to get intel for Liam and Steffy. There will be deceit all the way around in this scenario, and it will be interesting to see who prevails.

Young And The Restless Preview: Propositions Being Made – Adam And Phyllis, Plus Billy And Amanda!