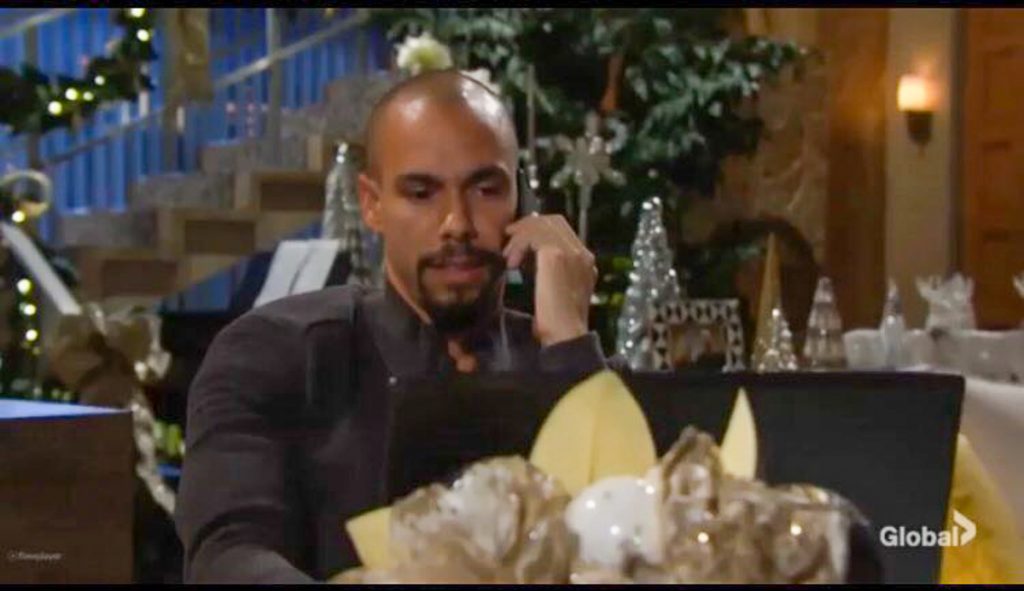 The Young and the Restless (Y&R) spoilers for Monday, December 16, tease that Amanda Sinclair (Mishael Morgan) will share a little more about her history. At the dive bar with Billy Abbott (Jason Thompson), Amanda will reflect on growing up as an orphan in foster homes. She’ll talk about how people show you want they want you to see. As the mask slips, you can often see the monsters within.

A phone call comes in from Victoria Newman (Amelia Heinle), who wants to meet up with Billy. He turns her down and promises to see her at home later. Billy adds that he left a surprise behind. Amanda leaves while Billy’s on the phone, but he’s invited to join a game of poker soon after. He’s pleased with his willpower after he turns down the chance.

At Billy and Victoria’s place, a card’s waiting for Victoria that tells her to enjoy the peace and quiet. Victoria kicks back with wine, chocolates and a Christmas movie before Billy returns. She’s appreciative of how he shows his love. Victoria thinks Billy’s perfect for her and always knew they’d find the real Billy with a little hard work. Billy stares off into space as Victoria embraces him.

At Society, Lola Abbott (Sasha Calle) teases Theo Vanderway (Tyler Johnson) about always working there instead of at his office. Theo feels like Lola’s food is a good inspiration. He tells Lola about the new Jabot emojis he’s working on and they discuss their mutual ambition. When the topic of the rejected Paris offer comes up, Theo suggests he stuck around to prove somebody wrong.

At Jabot, Summer Newman (Hunter King) is tired from their late night of working. She thinks Kyle Abbott (Michael Mealor) needs to go home to his wife, so she snatches his phone and gets Lola on a video chat. Lola insists she’s too busy to leave and shows Kyle the bustling restaurant as proof. He catches a glimpse of Theo before Lola eventually hangs up.

Afterward, Summer acknowledges that her breakup with Theo was likely for the best. Kyle talks about how invaluable Summer is and contends that she means more than she knows. Kyle adds “to Jabot” before telling Summer he’s where he wants and needs to be tonight.

Back at Society, Theo agrees to be Lola’s guinea pig for new dishes she’s experimenting with. Lola suggests she’ll make Theo’s favorites and it’ll be their secret. Nearby, Abby Newman (Melissa Ordway) questions Nate Hastings (Sean Dominic) about whether they’re still friends. He thinks they are, but she feels there’s a difference between a true friendship and just being friendly. Abby would like to get back to the former.

Amanda’s sitting at the bar when she gets a call. When no one pipes up on the other end of the line, Amanda gazes around anxiously. At Devon Hamilton’s (Bryton James) penthouse, he lets Elena Dawson (Brytni Sarpy) know he’s sorry for how hard he’s made things for her. Devon believes Elena deserves somebody better and wants to make some positive changes.

Once the conversation shifts to Hilary Hamilton’s (Mishael Morgan) lookalike, Elena notes that Amanda doesn’t have to be their enemy. She wants Devon to share all of himself with her, even the parts he’d rather hide. They get on the same page and seal it with a kiss before Elena exits.

Devon takes a look at his dossier on Amanda while on the phone. He mentions Ripley Turner, an ex-fiancé of Amanda’s. Devon learns that Amanda and Ripley filed restraining orders against each other before she came to town. At Crimson Lights, Nate pushes Elena to take care of herself. He’s concerned about Elena not getting enough sleep and feels she should trust everything will work out with Devon.

At the Grand Phoenix, Devon pops in and makes small talk with Abby before asking about Amanda. Abby confirms that Amanda’s still staying there and typically keeps to herself, but she appears to have plans tonight. Once he’s alone, Devon gets his phone out and types up a search for “Ripley Turner.”

The Young and the Restless spoilers say Devon’s digging could lead to some risky shockers, so he’d better be careful! We’ll give you updates as other Y&R news and rumors emerge. Stay tuned to see what else is brewing in Genoa City.

The Bold and the Beautiful Spoilers: Wyatt Makes a Decision – Goes with the ‘Flo’?