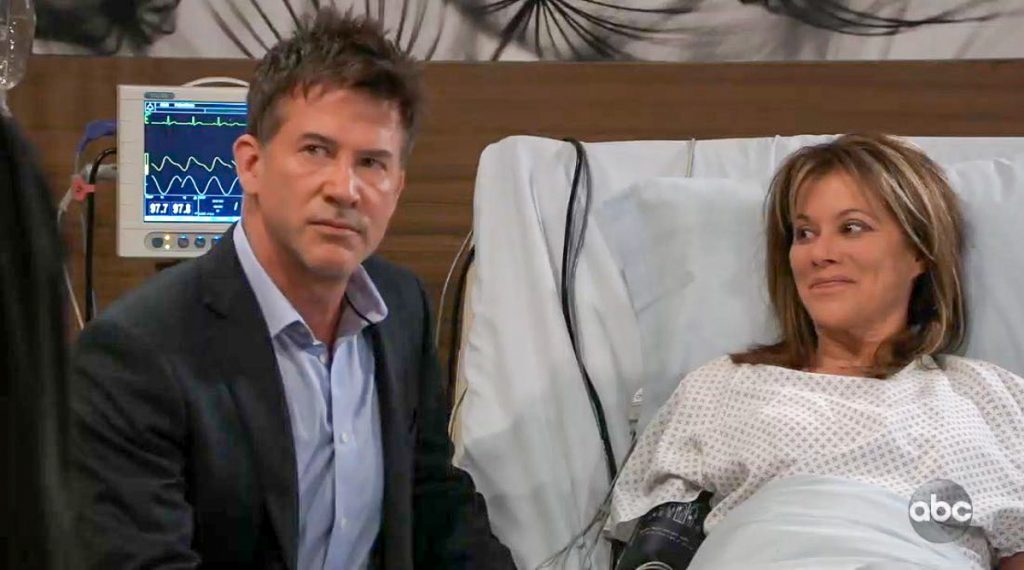 General Hospital spoilers for Monday, November 20 tease of another exciting day of drama for GH viewers!

At General Hospital, Dr. Hamilton Finn (Michael Easton) arrives, and Elizabeth Baldwin (Rebecca Herbst) has some news for him. She tells him that Anna Devane (Finola Hughes) is back. Of course, he already knows that because he just left her! Is Elizabeth trying to maneuver something here, like implying that her sister Hayden Barnes (Rebecca Budig) didn’t tell her anything about what happened? Finn will tell her he already knows and just came from talking to Anna. Whether he will verify that Hayden and Violet Barnes-Finn (Jophielle Love) stayed the night remains to be seen! This should be an interesting conversation! Finn will tell Elizabeth that he and Anna have a lot to work out!

Also at General Hospital, Dr. Lucas Jones (Ryan Carnes) is in an elevator with his husband Brad Cooper (Parry Shen). He tells Brad that he made sure that Julian Jerome (William DeVry) won’t be interfering in their marriage any more. He will likely update Brad that he again told Julian to stay out of their lives and that Lucas has again disowned him for gaslighting Brad with fake evidence of an affair on Brad’s part. Later, Brad will confront Julian according to other General Hospital spoilers!

Meanwhile, back at Charlie’s Pub, Julian apparently finds another dead rat and calls someone, probably Alexis Davis (Nancy Lee Grahn), to control their client or he’ll be seeing them both in court! He obviously thinks that Olivia Quartermaine (Lisa LoCicero) is still trying to ruin his business with dropping dead rats around; maybe he’s found this one inside Charlie’s Pub – that COULD give him a lot of problems with the local entity who inspects restaurants for safety issues and gives them their grade, usually A through F. An F grade would probably get the establishment shut down, while a D would get a warning to shape up.

Back in her hospital room at General Hospital, Alexis talks to someone, probably Finn, and asks about a cure for what’s ailing her. Viewers will recall from Friday’s episode that TJ Ashford (Tajh Bellow) had a brainstorm when the phrase “like rats from a sinking ship” was used, and went to get Alexis’ blood draws checked for rat poison. Undoubtedly damage has been done, but there should be some type of antidote for the poison. TJ will have a diagnosis and he and Finn may be there together informing Alexis of the diagnosis and options for treatment.

Attorney Diane Miller (Carolyn Hennesy) and Sam McCall (Kelly Monaco) have arrived for Sam’s bench trial. General Hospital viewers will recall that Sam had been cleared of the murder charges regarding the death of Shiloh Archer (Coby Ryan McLaughlin) but then the Feds came in after the Coast Guard claimed jurisdiction and re-charged her. Diane stands up and tells the judge that this is a clear-cut case of self-defense or defense of another, since Sam actually shot Shiloh with the flare gun to get him off of Jason Morgan, (Steve Burton) who he had pinned to the deck and was going to kill with a boating implement used to grab nets out of the water – it looked like a large baseball bat with a hook in the end! Jason will also make a statement.

At her apartment, which is mostly empty except for Kim herself and a couple of suitcases, Kim Nero (Tamara Braun) happily opens the door to a not-so-happy Franco Baldwin (Roger Howarth) and asks him if he’s ready to move to San Diego! Kim will not hear what she wants to from Franco, who with the mind of Drew Cain (Billy Miller) came to the conclusion that since the body he is in belongs to Franco, so does the life and he won’t interfere any longer with the process of restoring Franco’s mind, memories, and life to him.