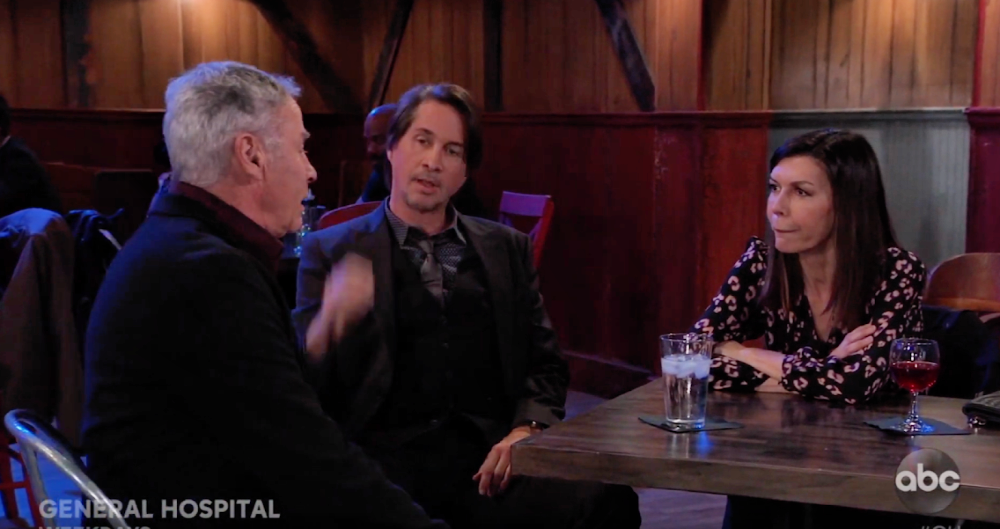 First, in a scene continued from Friday’s episode, a frustrated Maxie lays her heart bare to Peter, telling him that she had been having romantic feelings for him for quite some time, and was just waiting for him to make a move so she would know that he reciprocated! Peter, usually an articulate, intelligent grown man, stands tongue-tied with a look of shock on his face and the demeanor of a bashful little boy!

It is quite obvious to General Hospital viewers, and should be to Maxie as well, that Peter has absolutely no dating experience and Maxie is his first crush! Poor Peter, he just doesn’t know what to do, or how to respond at all, even after the talk he (and Maxie as well, unbeknownst to either of them) had about relationship advice and where they stood about each other with his mother, Anna!

Maxie's relationship status is complicated… to say the least. When will she and Peter take their flirtation public? @finolahughes
An emotional, new #GH starts RIGHT NOW on ABC! @teenystweeting pic.twitter.com/IJJgdc2ZVY

Meanwhile, on the other side of the room, Anna keeps a close eye on the couple to see what happens as her own boyfriend, Finn attempts to get a marriage proposal out of his mouth! Anna continues to be distracted by Maxie and Peter while Finn keeps trying to ask her to marry him, apologizes for not paying attention to him, and explains her conversation and advice to Peter!

Finn intends a flowery, romantic proposal, and just as he finally gets out the point that he’s been meaning to ask her something about their future, again he’s interrupted; this time by her ex-husband Robert Scorpio, who just barges right in and takes a seat at the table between them! Finn wryly invites Robert to have a seat after he’s already sat down, and Robert informs them that he has dug up some intel on Anna’s twin, Alex Marick that he needed to update them on!

Will Peter ever untie his tongue and tell Maxie his feelings, and will Finn ever get a word in edgewise to tell Anna his desires? Stay tuned to General Hospital and keep checking General Hospital spoilers frequently for all the latest news, updates, and spoilers!