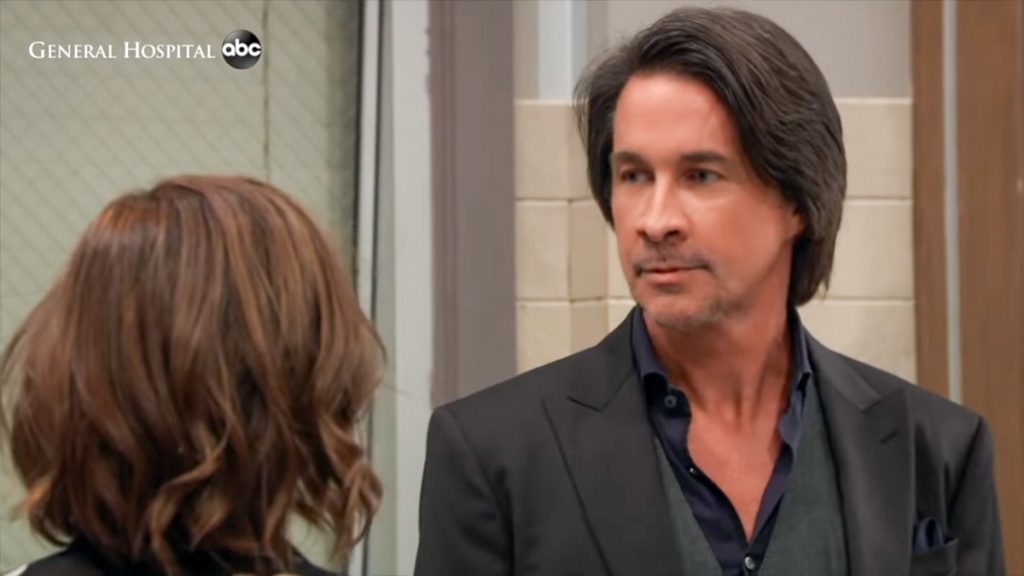 General Hospital spoilers tease that Dr. Hamilton Finn (Michael Easton) will not be ready to face Anna Devane (Finola Hughes) when she returns to Port Charles in upcoming episodes of General Hospital!

General Hospital viewers will recall that Finn called Anna right away to let her know that his ex-fiancée, Hayden Barnes (Rebecca Budig) has returned to Port Charles, but now there are some complications; for one thing, he now knows that Hayden didn’t miscarry, and they have a young daughter together named Violet Finn (Jophielle Love). Finn met his daughter under the most awkward of circumstances, awkward not only for him, but for Hayden, as little Violet was suddenly brought to General Hospital with a bad case of flu and Finn himself was called in on the case!

Hayden had been a no-show to a breakfast meeting that she and Finn were supposed to have in the Metro Court to talk about some things – namely, Finn’s suspicions that she didn’t miscarry their child – and Curtis Ashford (Donnell Turner) happened by and while he and Finn were talking about Hayden, Finn got a call to come to the hospital! Who should he find there but Hayden, right in front of the little patient’s room, and she blurted out that the patient was her daughter – and his, too! For Finn, it was love at first sight for Violet, but seething anger for her mother!

Other General Hospital spoilers tease that Finn will struggle with Hayden baggage and be torn between Hayden and Violet and his fiancée Anna even before she returns to town, and that is why he will not be able to face her when she returns. He may realize that he is still in love with the mother of his child deep down, and won’t want to hurt or disappoint Anna. However, it may well turn out that she has grown apart from Finn anyway, as long as she has been gone looking for her twin, Alexandra Devane Marick (Finola Hughes).

Finn and Anna were a very slow-burning couple, mainly because of Finn’s devastation over Hayden leaving him at the altar the day of their wedding, and his not being able to have closure because she just disappeared without a trace – except for the note that she left in a hotel room for Finn, which she may not have even intended to mail but that Curtis found when he tried to track her down! Then there was Hayden’s letter to Finn last summer in care of Curtis, where she wanted him to meet her in Rome but he passed, being involved with Anna.

Hayden and Finn seem to be working things out with each other, and she has been rather lamely explaining why she did what she did; but his emotional bond with her may not have really been severed, and a new one has certainly been formed with Violet. It sounds like Finn may break off with Anna because he still loves Hayden and wants his little girl to have a whole family, but he will struggle in knowing how to do it.

Days of Our Lives Spoilers: Julie Heartbroken For Eli – Lani Dumps Him At The Altar

The Bold and the Beautiful Spoilers: Zoe Puts Her Moves On Thomas – New Romance In The Works?