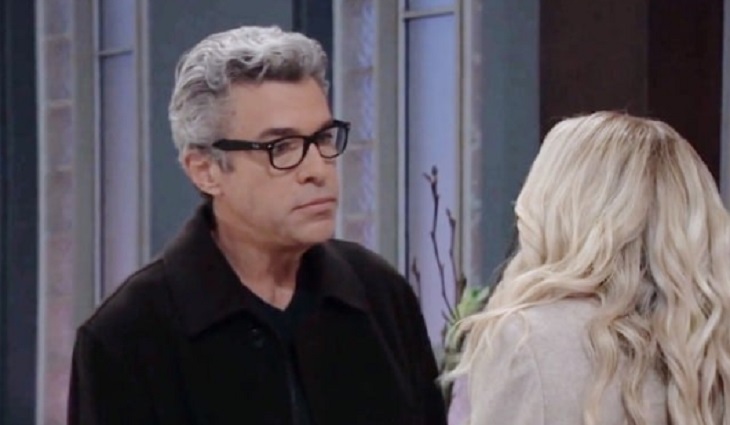 General Hospital spoilers tease that Michael Corinthos (Chad Duell) will visit Willow Tait (Katelyn MacMullen) in an odd place in Friday, June 28th’s episode of General Hospital; possibly in Port Charles Police Department’s jail! General Hospital viewers will recall that in Tuesday’s episode, Willow tore into Shiloh Archer (Coby Ryan McLaughlin) and refused to comply with the order of family court judge David Walters (William Allen Young) to turn over all information and the whereabouts of her baby to Shiloh!

As a result, Judge Walters found her in contempt of court and demanded she be arrested; however, did her boyfriend Detective Harrison Chase (Josh Swickard) really take her over to the PCPD, or will Michael perhaps be visiting her at Chase’s apartment?

General Hospital viewers probably figure there’s a good reason that Chase offered to arrest Willow, over Shiloh’s objections that he was her boyfriend; to take her somewhere safe that wasn’t the jail. Chase is by the book but maybe not THAT by the book! Michael will want to update him as well about Carol Lockhart (Mandy Musgrave) and her information on Shiloh.

Willow and Carol probably know each other from the Beecher’s Corners Dawn of Day since they were there at the same time. If Port Charles’ judicial system isn’t completely taken over by “Dawnies” then maybe they can have a chance at taking Shiloh down with Carol’s help.

In the meanwhile, if it is then Acting Police Commissioner Mac Scorpio (John J. York) will figure out some workarounds, after all, this isn’t the first time that there has been corruption in Port Charles’ legal system; longtime General Hospital viewers will remember “Mr. Big”, also known as Burt Ramsey (Bob Hastings) the former commissioner that was in thick with the mob before Sonny Corinthos (Maurice Benard) ever came to town; this was way back in the days of Frank Smith’s (George Gaynes) mob rule!

He was finally found out, and later put in a mental institution and died there. Sonny didn’t hit town until years after “Mr. Big” and Frisco Jones (Jack Wagner) was a PCPD cadet back in those years!

Every dog has his day, and Shiloh the Dawn of Day Dog’s day is coming; stay tuned to General Hospital and keep checking GH spoilers frequently for all the latest news, updates and developments! As always, more detailed Spoilers and Breaking news will appear here on Soap Opera Spy!

Days Of Our Lives Spoilers: Ciara And Tripp Plan Hits A Snag– Claire’s Fit Of Rage Puts Their Lives In Danger