General Hospital Spoilers: Bobbie Faints — Does She Have An Underlying Health Issue? 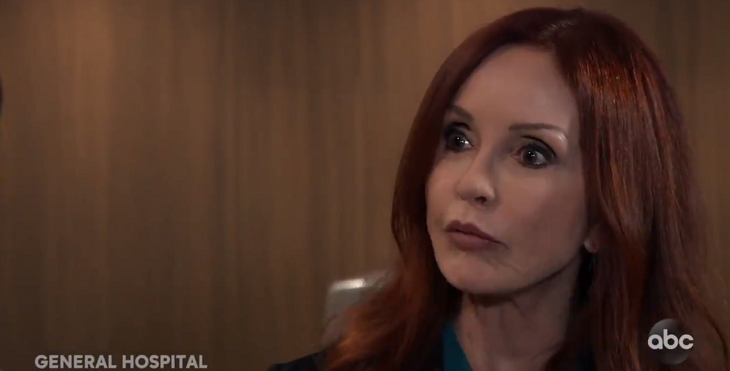 General Hospital spoilers tease that something will cause Bobbie Spencer (Jaclyn Zeman) to faint on Tuesday, June 25.  General Hospital viewers will recall that on Monday’s episode, her adopted son Lucas Jones (Ryan Carnes) will have filled her in on all things Shiloh Archer (Coby Ryan McLaughlin) and the possibility of he and his husband Brad Cooper’s (Parry Shen) adoption of Wiley Cooper-Jones (Eric and Theodore) being invalidated because Shiloh, the birth father was not notified there was a baby by Willow Tait (Katelyn MacMullen), the birth mother when Wiley was adopted, and there could also be a custody battle initiated by Shiloh!

However, Bobbie has been through worse than that type of news in her life, and although she may be worried, that shouldn’t cause her to faint or collapse; could she have developed a sudden serious health issue?

GH Spoilers– Does Bobbie Have A Health Issue?

Other General Hospital spoilers for the week have Lucas confirming some suspicions and Epiphany Johnson (Sonya Eddy) being supportive, and the first week of July, Carly Corinthos (Laura Wright) will endure a sleepless night.

Of course, as General Hospital viewers know, these spoilers could apply to many different scenarios and not be related to each other at all, but they could mean that Bobbie collapses and Lucas suspects a medical condition has caused it and he confirms it in Wednesday’s General Hospital episode.

If Nurse Bobbie has developed a sudden medical condition that caused her to faint, for instance a heart problem of course Head Nurse Epiphany will be supportive and daughter Carly will be worried!

General Hospital Spoilers– Is It An Issue With Wiley?

Another situation, although unlikely, that Bobbie might faint over would be if Wiley suddenly was discovered missing while in her care!

Without a chance to defend herself in court, Willow has no choice but to accept the judge's decision. Shiloh is another story. @josh_swickard
A dramatic, new #GH starts RIGHT NOW on ABC! #KatelynMacMullen pic.twitter.com/9cO24Xjh3r

Of course Lucas would suspect Shiloh or one of his minions, and that would fit with other spoilers for the week including Alexis Davis (Nancy Lee Grahn) who handled Lucas and Brad’s side of the adoption getting a call and also Julian Jerome (William DeVry) and Brad both vowing to keep their family safe, which could include going after Shiloh Sonny Corinthos (Maurice Benard) style.

This would cause Alexis to be furious with Julian! However this plays out with Bobbie, General Hospital viewers will recall that Spencers are tough and she should be okay!

Days Of Our Lives Spoilers: Eric Agrees To Marry Sarah And Rex– Will Their Marriage Last?