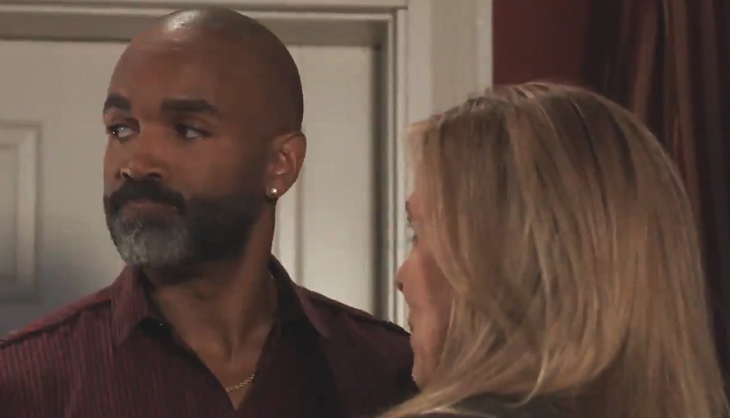 General Hospital spoilers tease that Curtis Ashford (Donnell Turner) is growing more and more suspicious. He is beginning to wonder if once again Ryan Chamberlain (Jon Lindstrom) has left a trail of breadcrumbs that have led he and Laura Collins (Genie Francis) on a wild Canadian goose chase!

Could Ryan already be lurking around Port Charles somewhere, getting ready to strike like a coiled rattlesnake hiding in the bushes?

The problem is, Ryan’s worse than a rattlesnake. At least it gives people a warning! We now know at least he can’t switch with Kevin Collins (Jon Lindstrom) again. At least not as easily, even if he has procured a lifelike prosthetic hand.

Curtis should check out anywhere Ryan could have gotten one of those, too, since if the amputation was done leaving the nerve endings in the arm intact. There are now bionic hands available that are very lifelike and work almost as well as a real hand.

General Hospital viewers will recall that when Curtis and Laura visited the house with the piled-up mail, someone was inside who watched as Curtis left the house. The implication is that it may have been Ryan.

But he would have had to have had his helper and the house set up ahead of time. And the house apparently was vacant since before Ryan left Port Charles for Niagara Falls with Ava Jerome (Maura West), intending to elope.

General Hospital Spoilers – On His Way To Attend Nurses Ball

This house, in Paris, Ontario, is too far to have been the cabin at the end of the footbridge in Niagara Falls. We know from Friday’s episode that they were in the same town as Maxie Jones (Kirsten Storms) and Peter August (Wes Ramsey). They wound up there, instead of Paris, France – since Maxie called it “French-esque”.

Paris, Ontario is about 74 miles from Niagara Falls, Canada. So if Ryan had a helper with a car, or if he had stolen a car, it would only take about an hour to an hour and a half to reach. Ryan could have even disguised himself as a woman and got away with it when trying to get Timmy to rob the pharmacy.

General Hospital Rumor: Who Will Be Ava’s Date At The Nurses Ball – Kevin Or Ryan? https://t.co/6XU2VnM1D2 pic.twitter.com/VkXUJYiZHk

Longtime General Hospital viewers will recall the episodes in September, 1995 when Mac Scorpio (John J. York) and Kevin dressed up as “Norma and Eve” to prove Lucy Coe’s (Lynn Herring) psychic was a fake. If Kevin could get away with it so could Ryan.

If Ryan is not already in Port Charles, he will be by the time the Nurses Ball starts! Stay tuned to General Hospital and keep checking General Hospital spoilers frequently for all the latest news, updates, and developments!