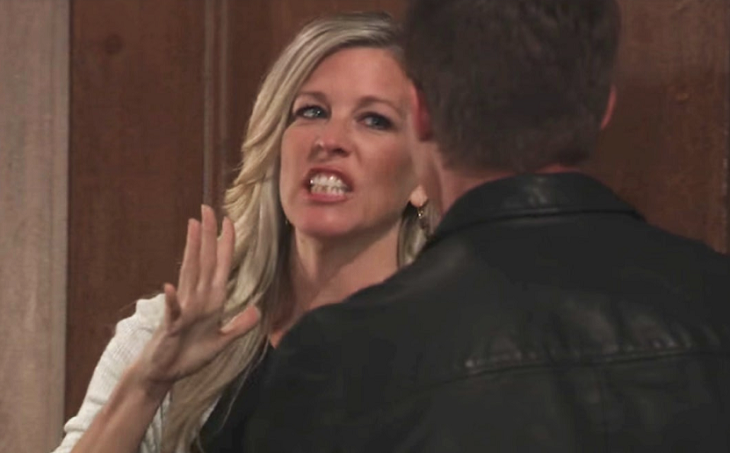 General Hospital spoilers tease that Carly Corinthos (Laura Wright) and Jason Morgan (Steve Burton) will bicker over something this week. That is a rare occurrence, what could the two besties possibly be bickering over?

Other General Hospital spoilers tease that Jason will take Carly to the hospital, so chances are, that’s what they will bicker about. Something will happen, maybe baby-related, or maybe stress-related while Jason is with her and she’ll say she’s okay and Jason will disagree.

General Hospital viewers know that would be just like Carly to minimize pain or discomfort, or minimize something like fainting. She would blow it off as just a part of pregnancy in a heartbeat. She may try to convince Jason that it is nothing to worry about and something minor.

But longtime viewers will recall that Jason, before the wreck that left him with a traumatic brain injury, was in medical school, following in his father Alan Quartermaine’s (Stuart Damon) to become a doctor.

The part of his brain that was injured undoubtedly changed his personality but not necessarily took away all of his memory, including that medical training. Otherwise, he would not have known what to do when Oscar Nero Quartermaine (Garren Lake Stitt) had his first seizure in front of him. Nor would he know what to do with bullet wound treatment which undoubtedly came in handy many times as Sonny’s enforcer!

Jason undoubtedly will try to keep the argument from escalating. He knows the stress of the argument itself and Carly’s rising temper will only make things worse for her and the baby.

General Hospital Spoilers – Dangerous Births In The Past

He was around when she had her very dangerous pregnancy with Josslyn Jacks (Eden McCoy). And when she had Morgan Corinthos (Bryan Craig), who she gave birth to with a bullet in the head. This was when when Sonny Corinthos (Maurice Benard) missed trying to hit Lorenzo Alcazar (Ted King). Michael Corinthos (Chad Duell) birth wasn’t much better. Plus, she’s had miscarriages in the past.

General Hospital Spoilers: Oscar Wishes That Jason And Drew Would Get Past Their Differences https://t.co/F1xL7MJfd0 pic.twitter.com/rZyOAUQWwP

While General Hospital viewers probably shouldn’t expect a dramatic scene of Jason hoisting Carly over his shoulders and carrying her to GH kicking and screaming, knowing Carly, it can’t be precluded either!