General Hospital spoilers indicate that Carly Corinthos’s (Laura Wright) unborn child might be in danger. This is mostly because of everything that Carly had to endure during her kidnapping ordeal.

Ryan Chamberlain (Jon Lindstrom) not only bound and gagged her, but threw her in the back of a trunk and almost drove her up to Niagara Falls. But is Ava Jermone (Maura West) to blame for what happened? Perhaps. Here’s what you need to know.

Carly is now in the hospital, waiting on pins and needles to hear about her unborn baby. She’s furious with Ava, who apparently left her in the car instead of helping her. Little does Carly know that Ava actually did that to help save her. It’ll be Jason Morgan (Steve Burton) who will tell Carly the truth, while hopefully also putting her mind to ease.

With that being said though, Carly is still having a high-risk pregnancy. Even her own daughter, Josslyn John Jacks (Eden McCoy) told her that she is perhaps too old to be pregnant at her age. 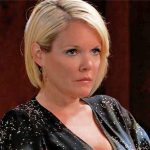 Of course, the pregnancy news came as a huge surprise for Carly and Sonny Corinthos (Maurice Benard). They didn’t expect it, to say the least.

But now that Carly is carrying another child, she is going to do everything in her power to stay pregnant and hopefully carry the baby to full term. That is, if she doesn’t end up getting kidnapped by another Port Charles serial murderer again.

Now, as far as what’s next for Ava and Carly remains to be seen. The two women were never good friends and from the looks of it, never will be. But if Carly realizes that it was Ava who saved her life, things might change.

They might not be the best of friends, but they probably won’t be the worst of enemies, either. Fans will find out soon enough! General Hospital airs weekdays on the ABC network. Check your local listings for times.

In the meantime, don’t forget to check back with Soap Opera Spy for all the latest news, updates and spoilers on General Hospital and all of your favorite soaps right here.

EastEnders Spoilers: Linda Wants To Kick Jean Out Of The Queen Vic