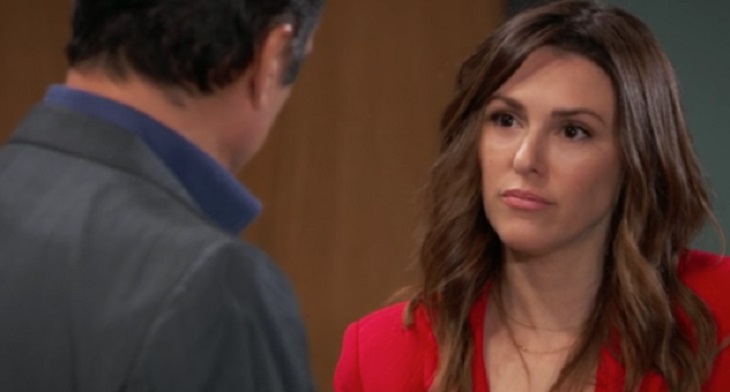 General Hospital spoilers indicate that Carly has her eye on Sonny as she believes that he might be getting too close for comfort with D.A. Margaux Dawson. As a matter of fact, it’s pretty obvious that both Sonny and Margaux have a growing connection, but whether or not that turns into something romantic remains to be seen. Here’s what you need to know.

It’s without a doubt that there have been plenty of women in the past who have fallen hard for the ‘Dimpled Don.’ After all, Sonny is the kind of man that a lot of women simply can’t resist. And for Margaux, she’s so far empathized more with The Don than with the law!

This could lead her into some very hot water. As a matter of fact, actress Elizabeth Hendrickson, who plays Margaux on the hit ABC soap, tells Soaps in Depth in a new interview, “Sonny needs to remain in that position or the show ends. But it’s also hard not to love him! I understand it.”

Elizabeth added, “Sonny got to her in a way that surprised her. Once the truth of her mother’s relationship with Scully came out and she learned she grew up believing a lie, it really blew up in her face. Sonny tugged at her heartstrings in ways that she wasn’t expecting to feel and doesn’t want to feel.”

General Hospital Spoilers – What About Carly?

Of course, a Margaux and Sonny romance would definitely cause some major problems for everyone involved. After all, Carly already ended up going almost crazy at Ferncliff. She definitely doesn’t want to end up there again! General Hospital airs weekdays on the ABC network. Check your local listings for times.

In the meantime, let us know what you think by leaving us a line with your thoughts in our comments section below. And as always, check back with Soap Opera Spy for all the latest news, updates and spoilers on General Hospital and all of your favorite daytime television shows right here!