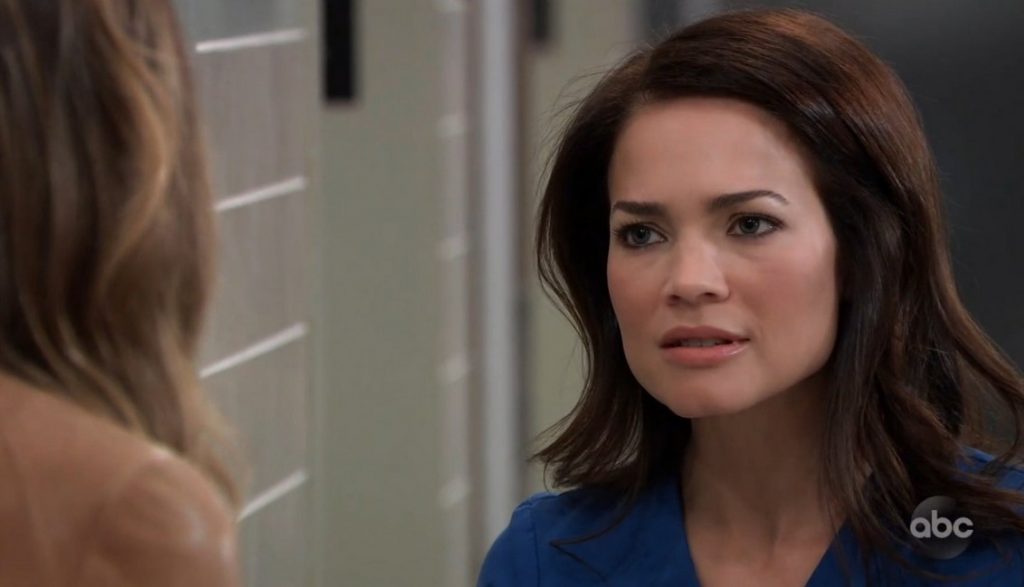 General Hospital (GH) spoilers tease that Kim Nero (Tamara Braun) remains convinced that Franco Baldwin (Roger Howarth) is really the Drew Cain (Billy Miller) that she knows and loves. But the truth is, Drew’s memories were implanted using the experimental memory mapping procedure and although Franco currently has all of Drew Cain’s memories prior to 2012, the Drew persona is nothing more than an echo of a man who no longer exists. The real Drew Cain in presumed dead.

And while’s confusion is understandable, the damage she is causing to Franco’s family threatens to tear them apart. Franco’s wife, Elizabeth Webber (Rebecca Herbst) is doing everything she can to bring her husband back to her. Her plan to is have the memory mapping procedure reversed. But Kim has hired a hotshot attorney, Martin Grey (Michael E Knight) to challenge Elizabeth’s legal right to go through with the procedure. Franco currently identifies as Drew Cain, and that is the strategy that Martin plans to use to win the case against Elizabeth.

Elizabeth’s son, Cameron Webber (William Upton) was with Franco when Franco’s memories were replaced with Drew’s. The last thing that Franco said to Cameron was that he (Franco) would be back and for Liz to hold on to that. But the Drew persona wants nothing more than to run off and be with Kim. Cameron may decide that to tell Kim exactly what Franco said in the hopes that Kim will realize she is holding on to a ghost. Kim probably won’t be swayed so look for a frustrated Cameron to bring up Oscar Nero Quartermaine (Garren Stitt).

Cameron and Oscar were good friends before Oscar died earlier this year. As viewers know, much of Kim’s pain and confusion is because she can’t seem to put Oscar to rest. Cameron might bluntly ask his friend’s mother what Oscar would think of what she is doing. Cameron may hope that bringing up Oscar will make Kim realize that she is holding on to Drew as a way to keep Oscar around. But Oscar wouldn’t want Kim to hurt Cameron’s family. Cameron’s words should shake Kim up? But will it be enough to make Kim realize that she is making a huge mistake?

Will Cameron be able to get through to Kim? Or is she so far gone that there is no turning back? A big legal battle is brewing but perhaps this will stop it before things happen that can’t be undone. Some exciting scenes are coming up on General Hospital, airing weekdays on ABC so stay tuned. And check back right here often for all the latest, news, information and spoilers!

The Bold and the Beautiful Spoilers: Shauna and Steffy Desperate For Love – Mr. Right Doesn’t Exist?

General Hospital Spoilers: Michael Frustrated With Willow, Tries To Clear His Head By…