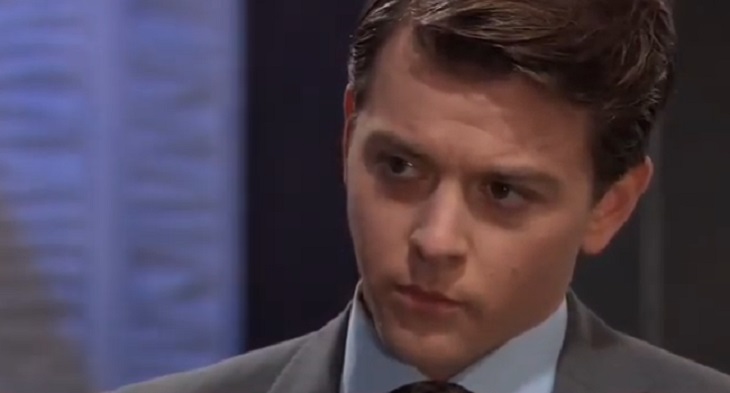 Jasper Jacks (Ingo Rademacher) surprises Nina Reeves (Cynthia Watros) when he wants to take her and Valentin Cassadine (James Patrick Stuart) out for dinner; should Nina trust that or should she assume that Jax wants to talk to them together to see if he can get them to contradict each other or agree with each other because he’s trying to get information?

After all, he has a file on Valentin and has obviously been investigating, so why should she trust that he’s not fishing for more intel with this dinner invitation?

Cameron Webber (William Lipton) has a confession to make as he admits to a crestfallen and shocked Josslyn Jacks (Eden McCoy) that he was the one who cut Joss and Oscar Nero Quartermaine’s (Garren Lake Stitt) lock off the footbridge, that she and Oscar had initialed and was supposed to signify their forever bond.

General Hospital viewers will have noticed quite a few couples continued the trend, and the city considered it less then romantic; they considered it junking up the bridge and Cameron had to cut it off along with all the others as part of his community service duties in Tuesday’s episode.

Trina Robinson (Sydney Mikayla) and Dev Cerci (Ashton Arbab), who comforted a crying Josslyn at the bridge when she discovered it was gone, reminding her that Oscar is gone forever as well, look on. Perhaps Cam was able to slip the cut lock into his pocket when he realized what it was so at least he could give it back to her?

An upset and hurt Detective Harrison Chase (Josh Swickard) tries to talk things out with his much older brother Dr. Hamilton Finn (Michael Easton) as he misunderstands Finn’s intentions in not telling his younger brother about many things in his life, including what happened between him and Hayden Barnes (Rebecca Budig). He tells him he thought they were going to have a real relationship, and Finn may have to explain that having a real relationship doesn’t necessarily mean no secrets between brothers as it may between spouses.

After all, does Finn know about Chase’s fling with Nelle Benson (Chloe Lanier) that caused him to be fired from the police department in Florida? It’s doubtful, considering the two brothers were barely speaking to each other when Chase first came to Port Charles! Tit for tat!

General Hospital Spoilers  – Willow Has A Talk With Michael

Wiley Cooper-Jones (Eric and Theodore Olson) will be a year old soon, and Michael Corinthos (Chad Duell) must be feeling the loss of his son Jonah Corinthos, who he does not realize is really Wiley. Willow Tait (Katelyn MacMullen) doesn’t realize Wiley is Jonah and is thinking about her son’s first birthday coming up.

The two talk about the subject that brought about their friendship to begin with, the loss of a child to death. Willow tells Michael that he is facing a loss much deeper than she is. Little do either one of them know that Willow’s baby is the one who died and Michael’s lived, with both thinking that Wiley is Willow’s!

Jason Morgan (Steve Burton) catches up with his best friend Carly Corinthos (Laura Wright) at the Corinthos compound. As the two sit together on the living room couch, Jason can tell something is bothering Carly and he tries to encourage her to talk about it. There may be other things that are bothering her as well, but Jason makes a guess and asks her if there’s something she’s not telling him about the new baby.

Meanwhile, Sonny Corinthos (Maurice Benard) is somewhere else talking to newly appointed District Attorney Robert Scorpio (Tristan Rogers). He has comforting news to report in that he says Shiloh Archer’s (Coby Ryan McLaughlin) freedom is only going to be temporary, but does he really know it is or is he just trying to make Sonny feel better by ensuring him he will do all he can as DA to make sure that Shiloh goes down and all criminal charges stick when his court case comes up?

Days Of Our Lives Spoilers: Jennifer Sets Up A Date – Is She Trying To Make Jack Jealous?