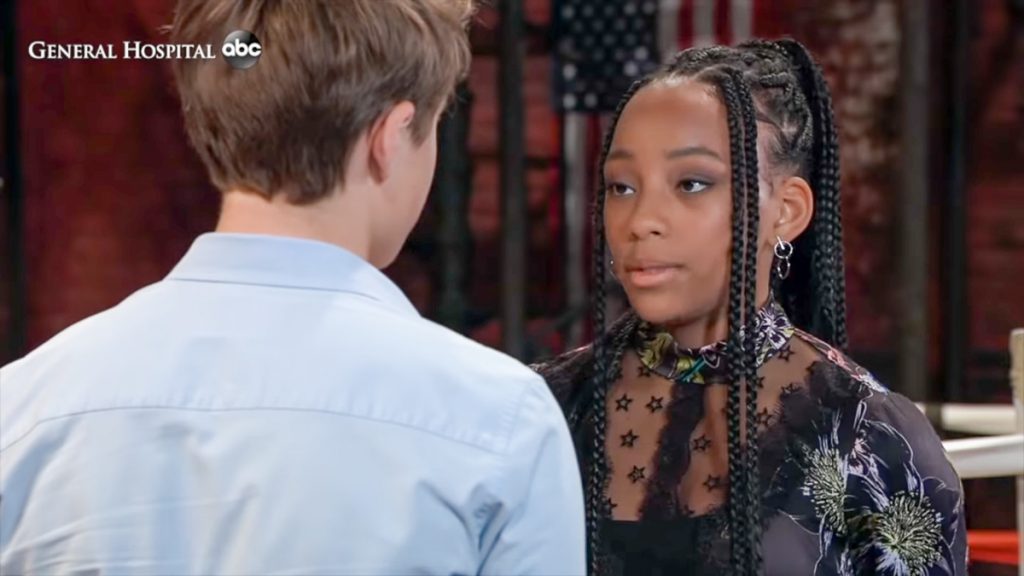 General Hospital spoilers tease that Ava Jerome (Maura West) and Trina Robinson (Sydney Mikayla) may be a match made in soapy heaven with Trina becoming like a daughter to Ava over upcoming General Hospital episodes!

Trina has never talked about her family, although she is assumed to be the daughter of a single mother. She has been a bad girl in her time, dating boys a little too old for her and getting in some trouble when she first was shown in the teen scene of General Hospital. But over time, she has proven to be a true friend to Josslyn Jacks, (Eden McCoy) Cameron Webber, (William Lipton) Oscar Nero Quartermaine (Garren Lake Stitt) when he was alive, and now Dev Cerci (Ashton Arbab). She was also very accepting of Ava when she applied as a part-time intern in a recent General Hospital episode, and Ava took a shine to the young girl, even though she had been looking for someone older!

GH Spoilers – Trina Robinson Might Need A Mother Figure, While Ava Jerome Has A Daughter-Shaped Hole In Her Heart

Trina’s unbiased acceptance of Ava might be exactly what won her over, Ava could tell that Trina didn’t care what she had done or who she had hurt in the past, and showed her respect; which is something that the greatest majority of people in Port Charles never have! Not even her brother Julian Jerome (William DeVry) has shown her the respect that Trina did when they first met, although he’s shown her a lot of protectiveness and brotherly advice – which Ava usually doesn’t want and doesn’t heed! But now, respect is a two-way street; and Ava herself doesn’t seem to have learned the art of respect for others.

Perhaps Trina might be a good influence on Ava! Trina, on the other hand, might need a mother figure, even though Ava may be a flawed one, where Ava needs a daughter figure. Trina is anxious to learn about and appreciates art, and Ava may feel better about herself as someone to mentor the young girl in learning the ropes of the art world!

Trina’s bad girl past, although certainly not as bad as Ava’s, might give her common ground with Ava and a relating point between the two in addition to bonding over art and the art world. Ava’s childhood and teenage years have never been brought up on General Hospital, but they may be very similar to Trina’s; growing up as the only daughter of a single mother, Trina’s mother possibly also being not the best role model for Trina as Delia Ryan Coleridge (Ilene Kristen) wasn’t for Ava; or Trina’s mother may just be an absentee one, maybe working several jobs but having little time to spend with Trina.

The Bold and the Beautiful Spoilers: Shauna Confides In Quinn About Her Kiss With Ridge – Jealous Quinn Freaks Out