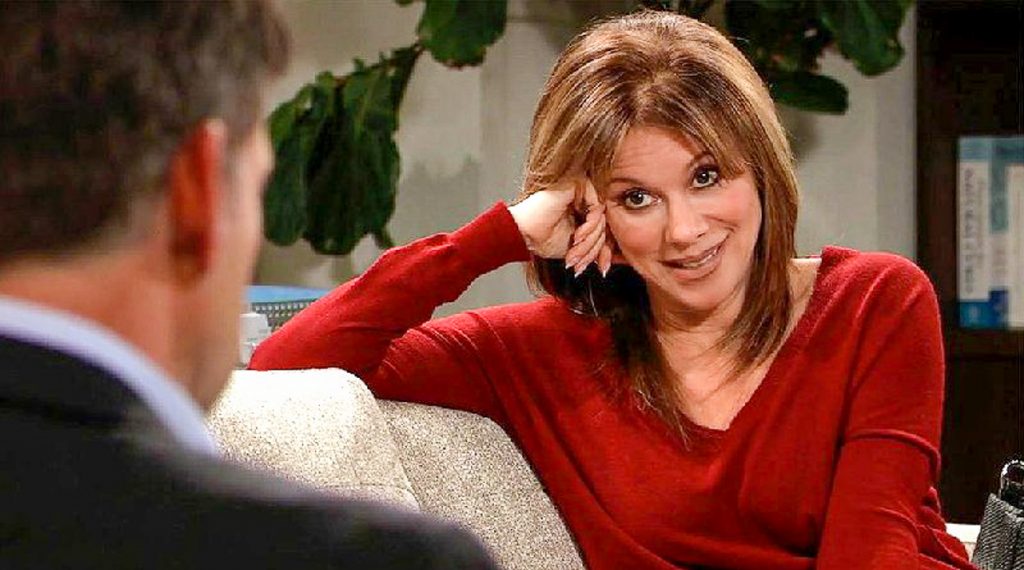 General Hospital (GH) spoilers tease that Alexis Davis (Nancy Lee Grahn) will soon become deathly ill, landing her in General Hospital! At first, it will just seem like the flu, but as Alexis’ condition worsens, it will become obvious that this something far more dangerous. As viewers know, Alexis’ new personal trainer. Kendra Lennon (Michelle Argyris), has added a mysterious substance to Alexis new drink supplement. Kendra wants revenge for the death of her brother Kiefer Bauer (Christian Alexander).

Will Alexis becoming more and more ill by the minute, doctors will do their best to figure out the cause. Hamilton Finn (Michael Easton) will be brought in to help figure out the cause. But in the meantime, friends and family will gather to support Alexis. Finn will caution then that until they know exactly what’s going on, Alexis could die without proper treatment. Look for Neil Byrne (Joe Flanigan) and Julian Jerome (William DeVry) to be on hand as well!

Neil and Alexis haven’t been dating all that long but they have gotten very close in a short amount of time. Neil was instrumental in helping Kristina Davis-Corinthos (Lexi Ainsworth) break free from the Dawn of Day cult. And even after that, he continued to act as Alexis’ therapist until they both realized that they had feelings for each other. At that point they discontinues their therapy sessions and even a had a very lovely first date.

But Neil isn’t the only person with romantic feelings for Alexis. Julian is the father of Alexis’ daughter Sam McCall (Kelly Monaco) and the two reconnected a few years ago. But Julian’s was forced back into the mob, and at one point even held a knife to Alexis’ neck and almost slit Alexis’ throat! He was forced to do it, but that ended things between them. Julian went to prison for a while, but ever since he was released, he has lived on the straight and narrow. He was involved with Kim Nero (Tamara Braun) for awhile, but that ended badly. Julian’s feeling for Alexis have always been there though.

GH Spoilers – Both men will be there for Alexis Davis

But with this new health crisis, look for both men to admit how they feel. Finn may suggest that Alexis needs all the support she can get while she fights this illness. So one or both of them may declare their love to Alexis! What do you think? Will Neil or Julian declare their love to a dying an Alexis? Will all of this love and support give the Alexis the will to fight for her life until the cause of her affliction is found? Some heartbreaking some scenes are coming up on General Hospital so be sure to watch weekdays on ABC. And check back here regularly for all your General Hospital news, information and spoilers!

Days of Our Lives Spoilers: Will Gabi Have a Change of Heart? Lani Might Find a Way to Reach Wicked Widow