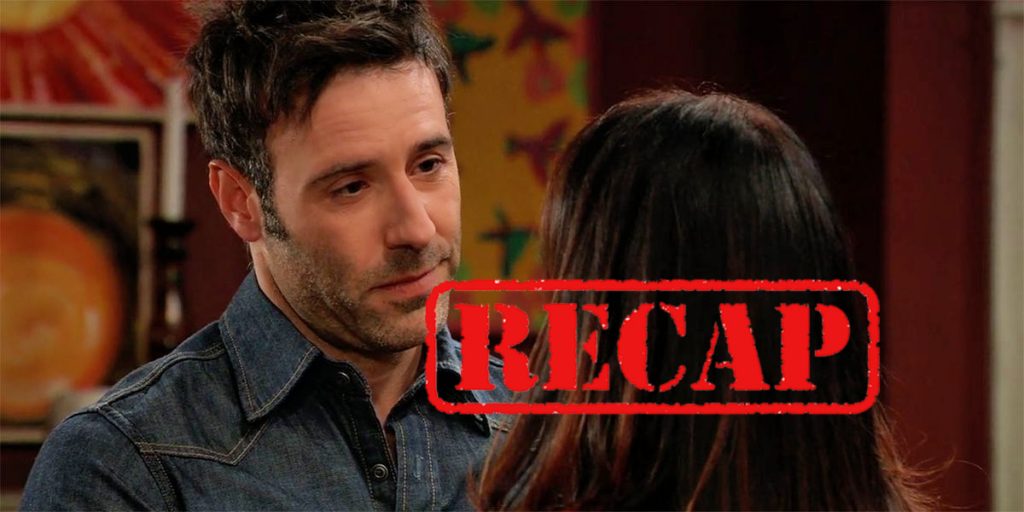 Sam and Jason kiss. Sam asks Jason what happened. Jason tells Sam he was with Carly Corinthos (Laura Wright). Sam asks if this had anything to do with Ryan Chamberlain (Jon Lindstrom), Jason confirms it. Jason tells Sam that the baby is ok as well. Sam asks if Jason got her text, he says yes. Sam tells Jason that Kristina Corinthos-Davis (Lexi Ainsworth) is getting in deeper with Shiloh Archer (Coby Ryan McLaughlin). Sam tells Jason about Daisy Kwan’s (Kelsey Wang) visit and the tattoo.

Damian Spinelli (Bradford Anderson) is trying to check on the tattoo to see what the symbol means. Sam tells Jason that Kristina borrowed money off Michael Corinthos III (Chad Duell) to invest in Dawn Of Day. Sam plays a part of Shiloh’s speech for Jason and tells him it is time to call DOD a cult now. Jason and Sam read up more on DOD and how factions work. Sam tells Jason she needs to continue to get closer to Shiloh to help Kristina.

"We need to call the 'DOD' a cult." #GH55 pic.twitter.com/JwZCfdSDDH

General Hospital’s Shiloh And Harmony Miller (Inga Cadranel) are discussing his speech at the rally. Harmony wants to move to Port Charles, Shiloh doesn’t want her there, and Harmony accuses him of being obsessed with Sam. Shiloh claims not to be obsessed with Sam and tells Harmony her numbers have dropped drastically. Harmony asks what happened to the man who professed to love her, and she got this for, revealing her tattoo. Shiloh professes to love Harmony more than ever. Harmony moves to leave, Shiloh asks if Harmony has heard from someone. Harmony asks why it matters where she is because he has Sam now. Shiloh tells Harmony to find this woman, and he will consider moving Harmony to Port Charles with him.

Valerie is worried about her friend, West Coast. Is there anything she can say about DOD that Kristina will listen to?
A tense, new #GH STARTS NOW on ABC! @_Brytni #GH55 pic.twitter.com/gjyDZW3TbH

Kristina arrives home and tells Shiloh he is good at what he does. Shiloh encourages Kristina and mentions the circle of trust. Kristina asks Shiloh if he thinks she is ready, he asks what is bothering her, and questions if it’s Valerie. Shiloh tells Kristina he knew Valerie wasn’t interested because she looked bored and disinterested at the rally. Kristina says Valerie is upset with her and DOD.

General Hospital’s Amy Driscoll (Risa Dorken) has Franco Baldwin (Roger Howarth) up helping him walk. Amy tells Franco that reporters want to speak with him. A drunken Ava Jerome (Maura West) is at the hospital to see Kevin Collins (Jon Lindstrom), Amy won’t let her. Ava tells Franco she knows he killed Kiki Jerome (ex-Hayley Erin), not the man she loves. Franco tries to reason with Ava, but she wants no part of it. Franco tells Ava the confession was the only way he could get justice for Kiki. Franco tells Ava if Jason hadn’t shot Ryan he could have killed her and Carly.

Ava says it might have been better because she wouldn’t have to face that she was never with Kevin. Ava tells Franco the first time she was with Ryan; he has just come from killing her daughter. Ava makes a loud noise causing Amy to check on Franco. Franco assures Amy things are ok. Ava hopes Ryan is alive so she can kill him. Ava needs Ryan to look her in the eye and reveal to her why he killed Kiki. Ava tells Franco he can’t be a part of Ryan’s death; she will get revenge for both of them.

General Hospital’s Laura Webber comes to Kevin’s room and discovers his sight has returned. Kevin wants to make sure Laura is ok; they kiss. Kevin changes clothes and Laura says she can take him home. Kevin asks Laura if she believes Ryan is dead. Laura tells Kevin the cops are still looking for Ryan’s body. Kevin apologizes, Laura says it isn’t Kevin’s fault. Laura asks Kevin how Ryan ended up at Ferncliff.

Laura still has questions about Ryan's return to Port Charles. When, exactly, did Kevin know his brother was still alive? #GH55
Tune into an emotional, new #GH – STARTING NOW on ABC! @GenieFrancis pic.twitter.com/qtucZXKPZ0

Kevin says someone called claiming to work for the DVX and found Ryan when he met with them. Kevin treated Ryan and was helping him. Kevin tells Laura how the DVX used Ryan and then planned to kill him. Laura blames herself for not knowing the difference between Kevin and Ryan. Kevin tells Laura he is the only one to blame for this. Kevin finally tells Laura Ryan has been back since Mary 2018. Kevin wanted to turn Ryan over to the authorities when he was stable.

Kevin didn’t think Ryan would escape, and Laura screams that Ryan did and killed three people as well as attacked her daughter and almost killed her. Kevin tells Laura he regrets trying to help his brother, especially after being locked up for months. Laura is upset with Kevin and leaves his room. Kevin asks Amy if she has seen Laura, she hasn’t. Ava sees Kevin and calls his name.

General Hospital’s Cameron Webber (William Lipton) arrives at the hospital. Liz Baldwin (Rebecca Herbst) is happy to see Cameron has returned safely. Liz tells Cameron if he hadn’t called Ava or Carly may have never been found. Cameron says Franco is the one who everyone should be thanking. Cameron tells Liz he was trying to protect her and his brothers. Cameron wants to apologize to Franco for not believing in him. Cameron tells Franco he read all about how Jordan asked him to help, and there is a ton of reporters outside calling him a hero. Cameron tells Franco the reporters are right he is a hero.

‘Bold and the Beautiful’ Spoilers & Recap Wednesday, March 13: Steffy’s Going To Paris To give ‘Lope’ A Chance