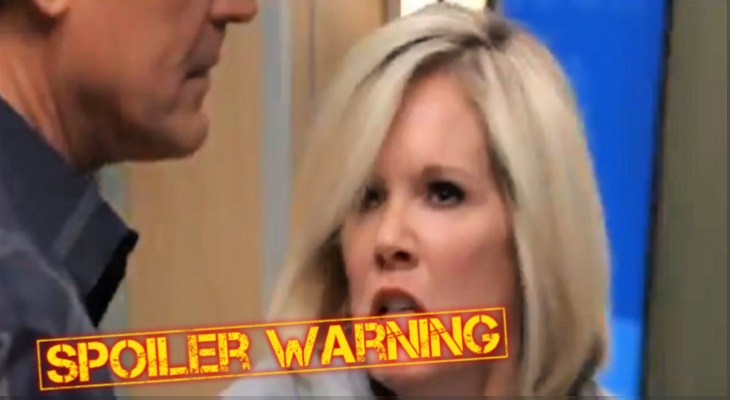 “General Hospital” spoilers for Thursday, March 14, tease that Anna Devane (Finola Hughes) will vent to Dr. Hamilton Finn (Michael Easton). She won’t be any closer to figuring out which memories actually belong to her, so her frustration is understandable. Nevertheless, Anna won’t give up. She’ll remain determined to learn which parts of her past were really lived by Alex Devane Marick (Finola Hughes).

Next, Harrison Chase (Josh Swickard) will have a suggestion for Willow Tait (Katelyn MacMullen). He’ll bring it up and wonder if it’s something Willow would be interested in. Whatever it is will undoubtedly bring them closer. Chase is quite smitten, so he’ll hope to make Willow fall just as hard. She’s getting there, but “General Hospital” spoilers say some snags will emerge along the way.

Over with Kristina Corinthos-Davis (Lexi Ainsworth), she’ll have a fierce fight with her sisters. Sam McCall (Kelly Monaco) and Molly Lansing-Davis (Haley Pullos) will be surprised by Kristina’s outburst. They’ll gently try to steer Kristina away from Shiloh Archer (Coby Ryan McLaughlin), but she won’t let them. Kristina will argue that if they can’t respect her choices, they’ll have to get out of her life.

General Hospital Spoilers – Shiloh Hints At A Miracle For Oscar

At GH, Shiloh will pay Oscar Nero (Garren Stitt) a visit. He’ll end up chatting with Oscar’s parents instead, but there’ll be some tension. Shiloh will tell Dr. Kim Nero (Tamara Braun) and Drew Cain (Billy Miller) that miracles are more common than they think. Kim knows what Oscar’s up against, so she won’t want Shiloh coming around acting like he can offer false hope.

Meanwhile, Laura Webber (Genie Francis) will drag her feet on invalidating the divorce Ryan Chamberlin (Jon Lindtrom) filed for. Lulu Falconeri (Emme Rylan) will hear about that and immediately wonder why. She’ll confront Laura about what the holdup is, so she may hear the whole ugly story.

Laura doesn’t approve of Dr. Kevin Collins’ (Jon Lindstrom) secrets, which caused great suffering for many Port Charles residents. This is sure to be a tough obstacle for them to overcome as a couple. Finally, Ava Jerome (Maura West) will unleash her wrath. She’ll rip into Kevin with everything she’s got, but she’ll actually think she’s confronting Ryan.

Ava will call him an SOB and slap Kevin across the face. Of course, Kevin will stand there and take what he deserves. His partially to blame for Ava’s pain, so “General Hospital” spoilers say he’ll take any criticism she wants to give. We’ll give you updates as other GH news and rumors emerge.

Stick with the ABC soap and don’t forget to check SOS often for the latest “General Hospital” spoilers, rumors, updates and news.

Bold And The Beautiful Spoilers Thursday, March 14: Taylor’s Devastating Call – Katie And Bill Are Set Up – Steffy Gets An Earful