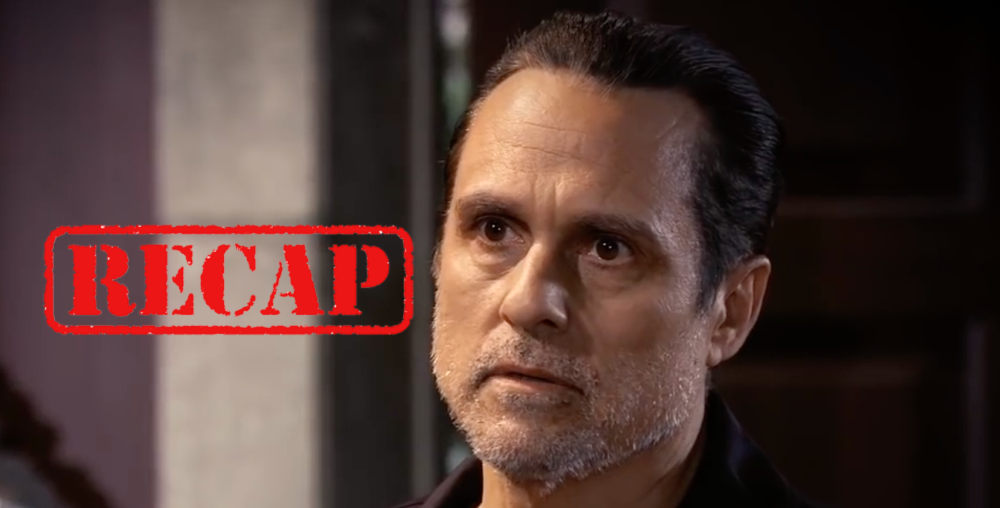 Dante shoots Sonny, and he hits the floor. Dante tells Raj that Sonny is more of an asset to them alive than dead. Raj is upset with Dante, but Dante explains that if Sonny dies, Jason will take over and Raj will be dead. Dante visits Sonny in the cell. Sonny knew Dante was doing what he had to do when he shot him. Sonny understands that Dante wants to take down Raj, but something bad happened while he was gone. Dante asks Sonny what happened and waits for an answer.

Sonny tells Dante that Lulu got stabbed. Sonny told Dante that Franco Baldwin (Roger Howarth) stabbed Lulu Falconeri (Emme Rylan). Sonny says Dante needs to get back home; Lulu needs him. Dante says he was working his way back to Port Charles; then Sonny showed up. Sonny asks Dante about Raj. Dante tells Sonny he let them capture him and Dante says he spent time in that cell himself. Dante tells Sonny he was going to be Raj’s inside man at the PCPD but can’t leave now. Dante says Raj will kill Sonny if he leaves. Sonny tells Dante to kill him. First, Dante asks what Sonny means; Sonny says to trust him.

Alex is back in Port Charles and she's already given Anna a headache. Can they put aside their differences long enough to answer a few questions?#GH is brand-new and STARTS NOW on ABC! @finolahughes #GH55 pic.twitter.com/I7CajlDev5

General Hospital’s Hamilton Finn (Michael Easton) comes to the hospital believing Anna Devane (Finola Hughes) is there. Alex Marick (Finola Hughes) tells him she can’t see. Finn explains that he neutralized the virus and this can’t happen. Anna arrives and tells Finn to meet her sister. Alex can’t wait to see Finn in person. Finn doesn’t want to aid and abet a criminal. Anna demands answers about memory mapping before Finn does the surgery. Alex says the memory mapping is a far fetched idea. Anna says Dr. Cabot told them everything. Alex asks if Anna is sure that Cabot told her everything. Anna demands to know which memories are her and which belong to Alex. Alex accuses Finn of going against the code of ethics he is supposed to believe in to get answers. Alex tells Anna that some things are better left alone.

General Hospital’s Sasha Gilmore (Sophie Mattsson) wants to speak to Peter August (Wes Ramsey) about Nina Clay’s (Michelle Stafford) wedding. Sasha tells Peter that Valentin Cassadine (James Patrick Stuart) brought them together and she doesn’t want anyone to ruin that for her. Sasha says Nina is kind and loving and deserves something good. Peter asks if Sasha believes she is good for Nina. Sasha speaks to Michael Corinthos (Chad Duell) at the bar and offers to buy her a drink. Michael and Sasha talk about their exes. Michael tells Sasha about Nelle Benson (Chloe Lanier) and how crazy she was. Michael tells Sasha he liked her, Sasha likes Michael too, and that is why she has to leave.

GH Spoilers: Lulu Suggest Maxie And Chet Like Each Other

General Hospital’s Maxie West (Kristen Storms) and Lulu are at the Floating Rib, Chet Driscoll (Chris Van Etten) is working there. Maxie talks Chet into giving Lulu a calendar that he posed for this year. Lulu wants Dante home, or at least to know he is alive then apologizes to Maxie. Maxie tells Lulu that stuff doesn’t bother her anymore, Chet helped her with that. Chet, Maxie, and Lulu talk about him visiting Nathan’s grave. Lulu thinks Chet is interested in Maxie. Maxie has no interest in Chet other than as a friend. Lulu says Maxie is seeing Peter. Maxie tells Lulu they are working on a project together. Peter approaches Maxie and Lulu. Lulu excuses herself leaving Maxie and Peter alone. Peter tells Maxie that Sasha is there and she may be onto them.

General Hospital’s Carly Corinthos (Laura Wright), Mike Corbin (Max Gail), and Michael go out to dinner. Mike wants to talk to Sonny and wants Carly to call him. Carly tries to explain the Mike that she can’t call Sonny. Mike wants to get to Yvonne Godfrey (Janet Hubert). Carly and Michael try to get Mike to eat before they take him back to Turning Woods, Mike says he isn’t hungry. Carly tells Mike and Michael about the baby; both are very excited. Mike wants to call Sonny to congratulate him. Lulu stops to visit with Mike and Carly. Mike thinks Dante should be there with Lulu.

General Hospital’s Curtis Ashford (Donnell Turner) goes to pick up Jordan Ashford (Briana Nicole Henry) from the hospital. Curtis tells Jordan she can work from home when she wants to go to the office. Curtis insists that Jordan needs to take it easy. Stella Henry (Vernee Watson) arrives to inform Jordan what to expect with dialysis. Stella gives Jordan food guidelines as well. Stella tells Jordan she has a bright future ahead of her. Curtis mentions having a baby someday. Jordan says he didn’t know that Curtis wanted to be a father. Stella suggests they talk to Jordan’s doctor about kids.

General Hospital’s Stella is at the hospital and sees Marcus Godfrey (Nigel Gibbs). Yvonne is there because she had an accident and hit her head. Mike tells Stella that he called Carly and said to her that Mike was upset because he couldn’t find Yvonne and told her about the accident. Stella is happy that Marcus called Carly and for considering Mike’s feelings. Marcus brings Stella food and tells her Yvonne is okay and goes back to Turning Woods tomorrow. Stella wants to return the favor, Marcus says he can’t pass that up, and they agree to have dinner soon.