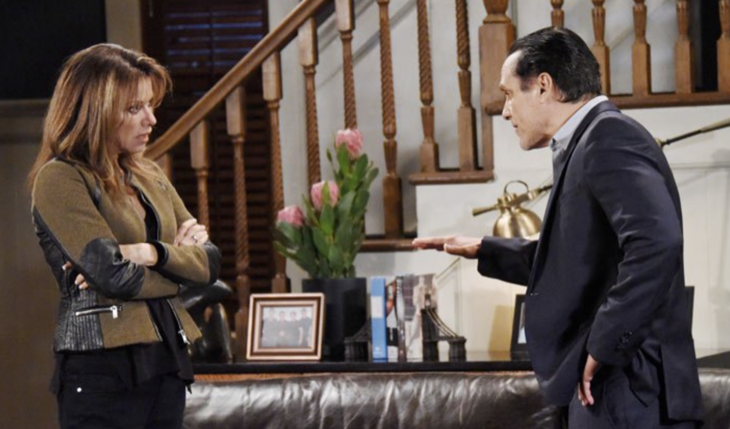 General Hospital spoilers tease that Alexis Davis (Nancy Lee Grahn) will be very eager to speak to Sonny Corinthos (Maurice Benard) about their daughter Kristina Corinthos-Davis (Lexi Ainsworth) this week on General Hospital. When Sonny first told Alexis that he was taking care of the problem, the first thing she did was call the police and warn them that Shiloh Archer’s (Coby Ryan McLaughlin) life was in danger, which got Jason Morgan (Steve Burton) arrested when he gave Shiloh a warning in the form of a choke hold against the wall outside of Kelly’s!

GH Spoilers: Jason Morgan and Shiloh Archer Have Been None To Friendly

Jason had seen Shiloh too friendly with his and Sam McCall’s son Danny (T.K. Weaver) and he warned him in no uncertain terms to stay away from his son! Shiloh, however, undoubtedly wanting to preserve his squeaky clean image to the police, forgave Jason and dropped the charges!

However, as General Hospital viewers now know, Kristina is in much more danger now than she was at that time at the bizarre Dawn of Day cult, and by this time may have already been branded, but possibly not yet. The initiation may be a several step, several hour or possibly several day process, as Lexi Ainsworth notes in an article in the “late-breaking news” section of “Soap Opera Digest” that Kristina waits for a very long time in her initiation garb, and as General Hospital viewers already know, soap opera days are not literal days. Soap writers frequently spread one soap opera day or partial day over several real-life calendar days!

Alexis turns to a friend for help dealing with her demons. Can Finn help talk her off the ledge? A tense, new #GH STARTS NOW on ABC! @NancyLeeGrahn pic.twitter.com/BLEazKiE5Q

Alexis may now be at the point where she has explored legal options such as police investigations and warrants into Shiloh and his Dawn of Day cult and found she has no legal standing to have police raid the facilities and free the captives!

Of course, she may not know that the DA is in the cult now and Margaux Dawson (Elizabeth Hendrickson) may be far enough up the food chain by this time to be totally indoctrinated. Alexis may have no other choice but to rely on Sonny and his contacts! Stay tuned to General Hospital and keep checking General Hospital spoilers frequently to see all the latest news and developments!

Days of Our Lives Spoilers: Jennifer Gets Help With Her Plan To Stop Eve And Jack’s Wedding