General Hospital Spoilers: A Mysterious Visitor Prepares For Her Return To Port Charles

General Hospital spoilers tease that a mysterious visitor is preparing for her return to Port Charles: but will that visitor be Hayden Barnes (Rebecca Budig), or the as yet unannounced character that Veronica Cartwright will play and be featured in a short arc of five episodes? Both are slated to appear in July, so actually either or both of them could!

Other General Hospital spoilers tease that Veronica Cartwright, who has been shown in a promo still with Ava Jerome (Maura West) at a restaurant, could either be a not-so-dead Melanie Chamberlain, Ryan Chamberlain and Kevin Collins’ (Jon Lindstrom in a dual role) mother avenging Ryan, or a psychic Ava goes to trying to reach Kiki Jerome (Hayley Erin) in a séance.

It’s possible that Veronica could be playing a psychic from General Hospital’s past, or possibly from its spinoff “Port Charles” which focused quite a bit on the supernatural. Veronica’s character seems a little more mysterious than Hayden, who General Hospital viewers know.

General Hospital Spoilers – Who Is Returning To GH?

However, General Hospital viewers do know Hayden will return sometime during July, possibly early July. Although she would probably pack more punch if she appeared at the wedding of Dr. Hamilton Finn (Michael Easton) and Anna Devane (Finola Hughes), Anna is currently out of town seeking answers from her twin Alexandra Marick (Finola Hughes) about their mismatched memories, while Finola usually takes the whole summer off every year for vacation and may not return until fall. 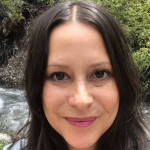 Hayden may show up at the wedding celebration of her half-sister Elizabeth Baldwin (Rebecca Herbst) and Franco Baldwin (Roger Howarth), which will take place aboard The Haunted Star sometime in July although the exact date has not yet been announced.

Other General Hospital spoilers tease that while she may want to connect with Finn, it will be so she can tell him the truth about their baby and meet him or her, and possibly will want his medical expertise for a medical condition the baby may have. Either way, there are mysteries involved with both Veronica Cartwright and Rebecca Budig’s appearances on General Hospital this July.