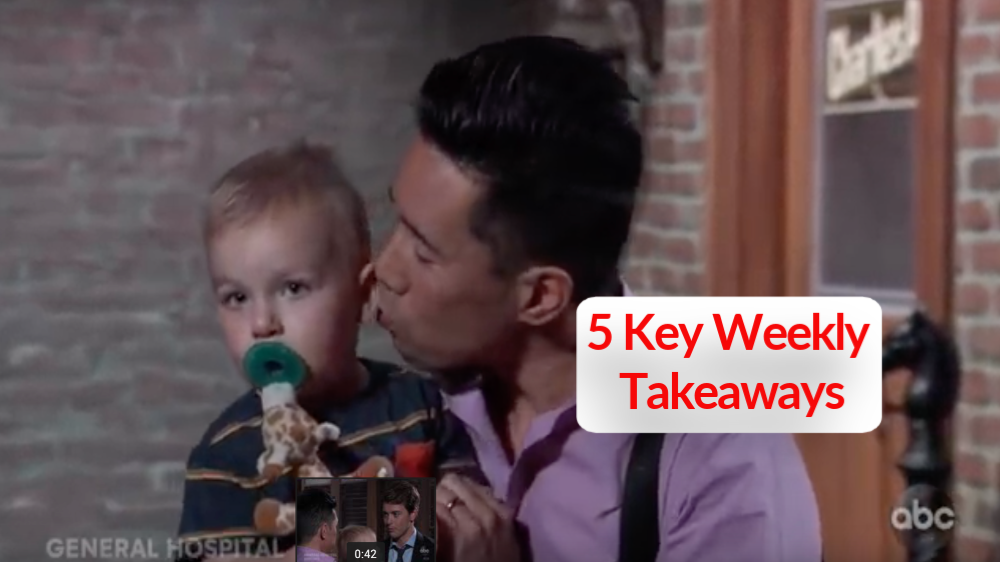 General Hospital spoilers tease there are five important takeaways for fans to watch for in this week’s General Hospital as some storylines escalate and at least one begins!

The situations surrounding Shiloh Archer (Coby Ryan McLaughlin) and the efforts of Sam McCall (Kelly Monaco), Jason Morgan (Steve Burton) Detective Harrison Chase, (Josh Swickard) and others to take him down and protect Wiley Cooper-Jones (Eric and Theodore) continue. As General Hospital viewers know, Shiloh has formally started the legal process to obtain custody of the baby boy that he fathered with Willow Tait (Katelyn MacMullen) during her Dawn of Day initiation “ceremony”, which of course is nothing more than a sanctimonious rape of a drugged initiate!

The fact that Shiloh’s “evidence” was obtained illegally doesn’t seem to matter to Judge David Walters (William Allen Young) and he ruled in Shiloh’s favor at Family Court, demanding Willow’s attorney, Diane Miller (Carolyn Hennesy) turn over all adoption records and that Willow turn over all information of where the child is; which of course put her in contempt of court and in a jail cell when she not only refused to, but told Shiloh off there in court!

In this week’s General Hospital, the Shiloh situation escalates, with him putting two and two together and likely figuring out that Wiley is his and Willow’s baby (as far as he knows). Brad is so nervous he’s ready to cut and run with the baby, but “Wiley’s Army” is at the ready to protect him from Shiloh as Chase brings acting Police Commissioner Mac Scorpio (John J. York) in the loop, and Mac works his magic!

2. The Search For Dante Falconeri

Also this week on General Hospital the search for Dante Falconeri(Dominic Zamprogna) ramps up, and is updated as Thursday’s episode will be an encore of when Sonny Corinthos (Maurice Benard) and Robert Scorpio (Tristan Rogers) found Dante in Ankara, Turkey last March and Sonny met Dev, (Ashton Arbab) a young orphaned teen who led him to Raj Patel’s (Noshir Dalal) hideout, where he found Dante.

Sonny brought Dante home but he started having problems with post-traumatic stress disorder and brainwashing suggestions for him to complete the mission by murdering his wife Lulu Falconeri (Emme Rylan) and sought help from Anna Devane (Finola Hughes) who got him into a WSB brainwashing treatment facility. This week, Laura Webber (Genie Francis) pleads with Robert to find her daughter’s husband, while Sonny deals with Dev, who has fled Raj’s men for safety in Port Charles, and he awaits a call from Brick (Stephen A. Smith) who is trying to get Dev a fake identity as Brandon, a young cousin of Sonny.

Dev isn’t all that Sonny must deal with this week; in Friday’s episode he and his wife Carly Corinthos (Laura Wright) found out during a routine ultrasound that their baby, due in the fall, has a condition called spina bifida, in which the spinal cord doesn’t form properly and vertebrae don’t fuse. The birth defects can range from minor, such as skin irritations, to severe and Carly will spend a sleepless night worrying and possibly having nightmares over what their baby will be like and what kind of life he or she will have.

Alexis Davis and Her Girls

Alexis Davis (Nancy Lee Grahn) and at least two of her daughters will deal with situations this week; although Alexis will be grateful for all that she has, Kristina Corinthos-Davis (Lexi Ainsworth) will learn of Willow’s predicament and ask Dr. Neil Byrne (Joe Flanigan) to counsel her and her mother Alexis together in family counseling. Meanwhile, her oldest daughter Sam McCall (Kelly Monaco) will reconnect with Jason Morgan (Steve Burton).

Franco Baldwin (Roger Howarth) will again find cause to worry about his stepson Cameron Webber (William Lipton) this week on GH. General Hospital viewers will wonder what dilemma Cam’s gotten himself into this time! Perhaps he tried a “magic trick” taught to him by Dev, namely pickpocketing and got caught doing it by the wrong person; perhaps a cop!

That’s not a good magic trick to try when one is on probation and doing community service! Meanwhile, Franco talks his dad, Scott Baldwin (Kin Shriner) into trying the dating scene, and Scotty’s sarcastic sense of humor again gets him in trouble when he is seriously misunderstood by Bobbie Spencer (Jacklyn Zeman)!

Those are the five takeaways for this week’s General Hospital, although of course there is more drama and more situations this week.

“General Hospital” spoilers say another terrific episode’s coming up. We’ll give you updates as other GH news and rumors emerge. General Hospital airs on ABC. As always, more detailed Spoilers and Breaking news will appear here on Hollywood Hiccups!