General Hospital Rumor: Did Maxie Trigger Dante To Shoot The WSB Agent – Who Was Shot? 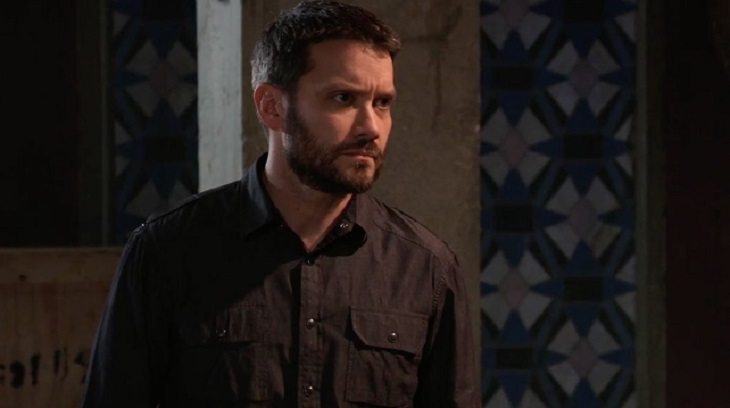 General Hospital spoilers tease that Maxie Jones (Kirsten Storms) may have triggered Dante Falconeri (Dominic Zamprogna) to attack WSB Agent Evans (Jason Ryan Lovett) in Friday, July 12th’s General Hospital episode, when she barged in through a door behind him, shouted, “DANTE! NO!” and a gunshot rang out!

Peter August (Wes Ramsey), who was with her in the Ithaca, New York WSB mental health facility thanks to an intervention by Frisco Jones, (Jack Wagner), Maxie’s father to visit Dante, tried to stop her but General Hospital fans know Maxie; she’s like a bull in a china shop and a force of nature when she makes up her mind to do something, and very impulsive!

It sounds like Maxie made a possibly fatal error this time! In General Hospital previews for Monday, it shows Maxie looking downward, possibly at someone on a stretcher, and says he’s being taken to General Hospital. She doesn’t appear to have a phone in her hand talking to someone, so she may be telling Peter.

Neither General Hospital nor Dominic Zamprogna himself have given any clues on social media if Dom will be reprising his character Dante nor of any upcoming recast as of this writing; but there are General Hospital spoilers for Friday, July 19 that say Kristina Corinthos-Davis (Lexi Ainsworth) is shaken, and Laura Webber Collins (Genie Francis) offers her support! Could Dante have been killed by Agent Evans in self-defense?

It doesn’t make any sense for Agent Evans to be taken to General Hospital since Ithaca, New York is nowhere near where Port Charles is supposed to be located. Port Charles has docks and appears to be on the Atlantic Ocean coast not far from the Canadian border, whereas Ithaca is in the Finger Lakes region in Central New York.

General Hospital viewers will also recall that the WSB has its own medical facilities, one in Canada where Cassandra Pierce (Jessica Tuck) was kidnapped out of about a year ago, so why wouldn’t an injured Dante be treated in a WSB facility instead of brought to GH in Port Charles?

Unfortunately, unless General Hospital powers that be or Dom Zamprogna himself announces that he will reprise the character of Dante over the weekend, it doesn’t sound like good news for the Corinthos/Falconeri family!

However, a bright spot exists in that there are no spoilers about Olivia Falconeri Quartermaine (Lisa LoCicero) being devastated so perhaps Kristina will be shaken about something else other than the death of her oldest brother! General Hospital fans will just have to wait and see what Monday’s episode brings!