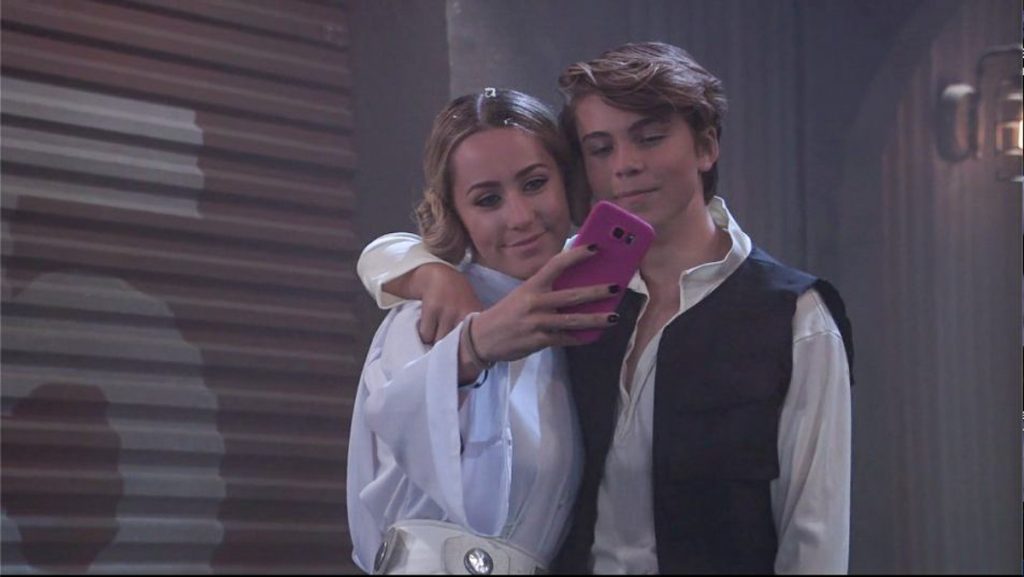 At the Corinthos house, Josslyn Jacks (Eden McCoy) is frantic, as she tells her mother Carly Corinthos (Laura Wright) and father Jasper Jacks (Ingo Rademacher) that she lost it! Is she talking about herself, or did she perhaps lose the necklace made like her grandmother Jacks’ that Jax brought for her little sister Donna Corinthos (Ella and Emma Hulen)? Or maybe she lost the one that Jax gave her when she was little? Whatever it is, she’s about to lose it over what she lost! Maybe it’s just her Halloween costume?

At Alexis Davis’ (Nancy Lee Grahn) home, Molly Lansing-Davis (Haley Pullos), dressed in her Halloween costume as a judge, is shocked to find her mother apparently unconscious on the couch! She repeatedly shouts at her, “MOM!!! WAKE UP!! Perhaps Molly should call 911, but other General Hospital spoilers say that Alexis will likely wake up and brush it off as a case of the flu!

It looks like Trina Robinson (Sydney Mikayla) and Cameron Webber (William Lipton) are plotting some Halloween tricks and treats! Maybe they are talking about the Port Charles High School Halloween dance that is to be held on board the Haunted Star; she seems pleased as she confirms with Cameron that he’s in!

GH Spoilers – TJ Ashford Has Something To Tell Jordan Ashford

The Ashfords are dressed in their Halloween costumes at the Metro Court, where they are attending the Metro Court Halloween party. TJ Ashford (Tajh Bellow) approaches his mother, Jordan Ashford (Briana Henry) as Curtis Ashford (Donnell Turner) looks on. TJ tells his mother that he has something important he needs to tell her!

Jax has made his way from the Corinthos house to the Metro Court and is dressed in his Halloween costume, as are Valentin Cassadine (James Patrick Stuart) and Laura Collins (Genie Francis). Valentin is exasperated as he impatiently asks Laura and Jax why they are OBSESSED with Helena Cassadine’s (Constance Towers) portrait, which he recently threw out because his young daughter Charlotte Cassadine (Scarlett Fernandez) was frightened of it! He obviously has no clue that it holds clues to the location of Mikkos Cassadine’s (John Colicos) codicil to his will, and none of them have any clue that it is now in Ava Jerome’s (Maura West) art gallery, thanks to Dev Cerci (Ashton Arbab).

Also at the Metro Court Halloween party, Nina Reeves (Cynthia Watros) confronts Sasha Gilmore (Sofia Mattsson) as Michael Corinthos (Chad Duell) looks on. She tells her angrily, that she is holding her personally responsible! Exactly which thing Nina is talking about remains to be revealed in tomorrow’s General Hospital!

Ava, dressed as Cruella DeVil, has an unpleasant confrontation as it appears that another woman, dressed in a light green, accosts her and smacks her across the face! The woman’s face cannot be seen because we only see her from the back, but it will be interesting which other woman in Port Charles could be that angry with Ava, and more importantly, why!

Hayden Barnes (Rebecca Budig) talks to Dr. Hamilton Finn (Michael Easton) about their daughter Violet Finn (Jophielle Love) whose existence Hayden has recently admitted to Finn and Finn has recently discovered! She asks him if he is going to want to be a part of his daughter’s life. It’s a good bet he will because it was obvious it was love at first sight when he let her play with his stethoscope in her hospital room!

General Hospital Spoilers: Brad Gets The Cold Shoulder From Julian