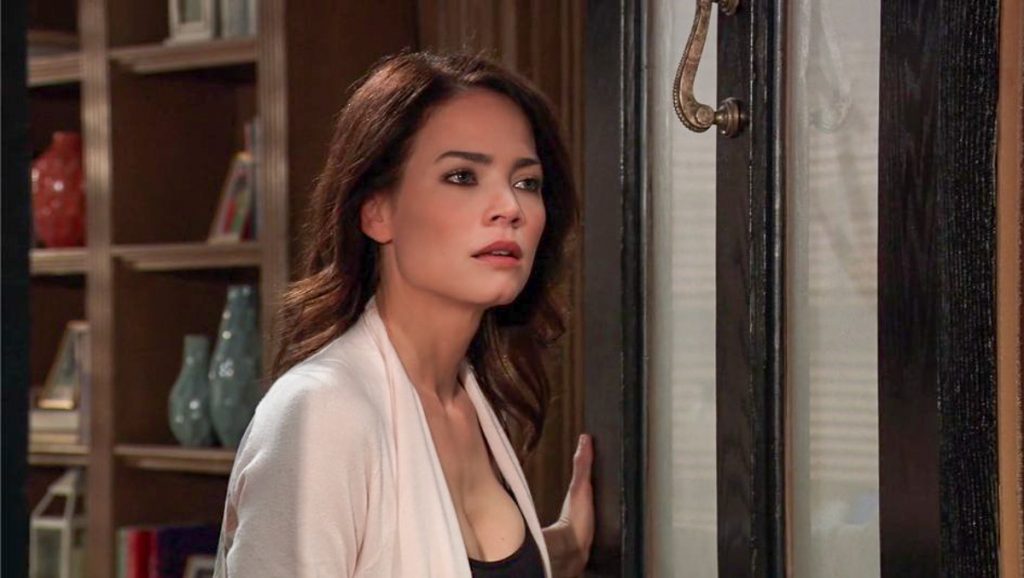 Welcome to your Wednesday November 6th General Hospital (GH) recap! We begin our day at Pentonville Prison, where Jason Morgan (Steve Burton) has come to visit Sam McCall (Kelly Monaco). Sam asks how the kids are and Jason says they are good, but that her mother Alexis is in the hospital.

At General Hospital (GH) Kendra Lennon (Michelle Argyris) is helping Alexis Davis (Nancy Lee Grahn) settle into her hospital bed. Kendra says she was worried about her and wonders if there are any updates on her condition.

At Pentonville prison, Cassandra Pierce (Jessica Tuck) is led to an interrogation room where Robert Scorpio (Tristan Rogers) is waiting for her. He says he has an offer for her but has an expiration date.

At General Hospital (GH) Hayden Barnes (Rebecca Budig) brings Violet in to see Hamilton Finn (Michael Easton). She thanks him for making her feel better which makes Finn light up in joy. She sits down to draw and Hayden thanks him as well.

Hayden says he hopes they can stay in Port Charles and he will be a part of Violet’s life.

At Elizabeth Webber’s (Rebecca Herbst) house, Kim Nero (Tamara Braun) arrives and say its long overdue they have a chat. Kim says she wants to check in on her and that she still considers herself a friend. Elizabeth flips out and says they are not friends, she ruined that when she slept with her husband.
Kim says that her and Drew love each other which infuriates Liz even further.

At Oscar’s Meadow, Franco Baldwin (Roger Howarth) meets up with his father Scott Baldwin (Kin Shriner). Franco tells Scott that him and Kim are leaving town. Scott says he lost two children, which surprises Franco. Scott says that’s probably why the two of them got so close recently.

At Jasper Jax’s condo, Nikolas Cassadine (Marcus Coloma) hears a knocking at the door and realizes its his mother Laura Spencer (Genie Francis). Nikolas debates opening the door as Laura stands right outside of it. Suddenly Jasper Jax (Igo Rademacher) appears and she asks him if someone is staying at the house which he denies.

Sam McCall (Kelly Monaco) is shocked to hear her mother is sick as Jason describes her symptoms. Sam is worried about Alexis and tells Jason that Cassandra Pierce is her cellmate.

At General Hospital (GH) Alexis Davis (Nancy Lee Grahn) waits to hear news on her illness as Kendra tells her that she considers her a friend now. Suddenly Julian Jerome (William DeVry) arrives with flowers, he wonders if they have found out why she is sick yet.
Finn enters the room and begins to check Alexis for pain points.

At Pentonville prison, Robert Scorpio (Tristan Rogers) says he will give her a private cell at the Hague if she tells him who broke her out of WSB custody last year. Casandra says she wants her attorney, but Robert says “sister, this deal runs out at midnight.”

At General Hospital, Robert runs into Violet and says hello. He says he knows her mama, but not so sure he knows her daddy. Violet says she has no dad or a puppy.

Cassandra calls Nikolas and we discover they have been working together. Nikolas is the one who kidnapped Anna and Finn and had them revive Cassandra.

Scott tells Franco about his terrible childhood and the abuse him and Drew suffered. Hayden brings Violet home to Elizabeth’s house and they hug.

Julian runs into Kendra and she gets his phone number to keep track of Alexis. Alexis brushes her hair and realizes its falling out.

Sam and Cassandra are set up to go on work detail and she realizes its her lucky day. One of the guards gets a text that says “ its been handled”……flash to preview