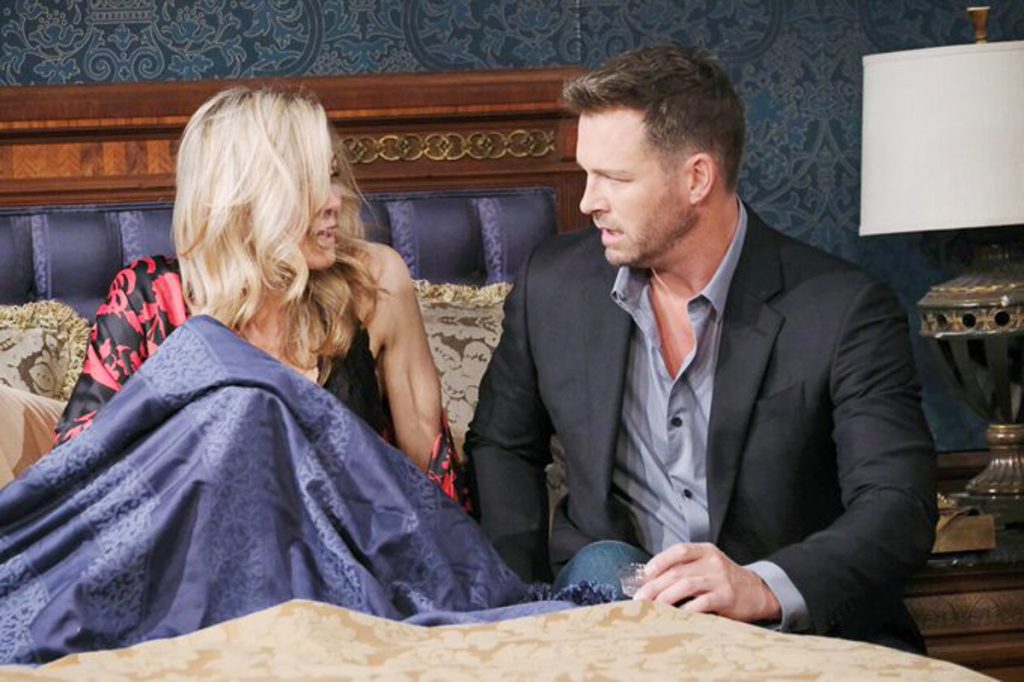 Days of Our Lives Spoilers – Kristen DiMera Has A Scare

Kristen DiMera (Stacy Haiduk) has a pregnancy scare as she has pain in her pelvic area. Brady Black (Eric Martsolf) consoles her as she lays in bed, concerned as well about baby Black-DiMera. More than likely he will insist that she gets checked out, even calling 911 is a possibility; they don’t want anything to happen to the baby and if she is transported by ambulance paramedics will be able to keep an eye and a medical assist on things should they deteriorate!

Jack Deveraux (Matthew Ashford) and JJ Deveraux (Casey Moss) search for answers regarding Jennifer Horton Deveraux’s (Melissa Reeves) fall. They are suspicious as to how she could just fall off a balcony like she did, and although Detective Rafe Hernandez (Galen Gering) is investigating, so far he has come up with no answers, and Hope Brady (Kristian Alfonso) who was at the scene knew nothing – because she’s no longer Hope Brady in her mind, she’s Princess Gina; and she will stop at nothing to make sure that Jennifer will never tell what she knows about that!

Nicole Walker (Arianne Zucker) struggles with the secret she knows about Sarah Horton (Linsey Godfrey) being pregnant with Eric Brady’s (Greg Vaughan) child and whether she should tell Eric the secret. She is torn, because she does not like keeping secrets from Eric, and yet if she tells him about the baby Sarah is carrying, he might think it’s the right thing, or the better thing, to give the baby a home with both of his or her parents! Chances are he will not leave Nicole for Sarah, but that doesn’t mean that she doesn’t worry that he might! After all, even though he loves Holly Jonas (Scarlett and Harlow Mallory) Sarah’s baby is his OWN child that HE fathered!

DOOL Spoilers – Brady Black And Xander Kiriakis Have A Run-In

Brady and Xander Kiriakis (Paul Telfer) have a run-in; the two are in constant conflict anyway, but perhaps Xander and Brady get into it about Sarah this time; Brady may see Xander getting a little too close to Sarah, as far as he is concerned, and trying to get her to stay in Salem when she’s seemingly made up her mind to leave! Or, Xander and Brady might even get into it over Kristen!

Days of Our Lives Spoilers – Ben Weston Has A Nightmare

Ben Weston (Robert Scott Wilson) has a nightmare that he kills his sister Jordan Ridgeway! He has certainly been tempted and has considered it, and even had asked Victor Kiriakis (John Aniston) to put a hit out on her in recent Days of Our Lives episodes! She is still at large after trying to kill his girlfriend, and Victor’s granddaughter Ciara Brady (Victoria Konefal) with a poisoned cupcake, so she is definitely still a danger!