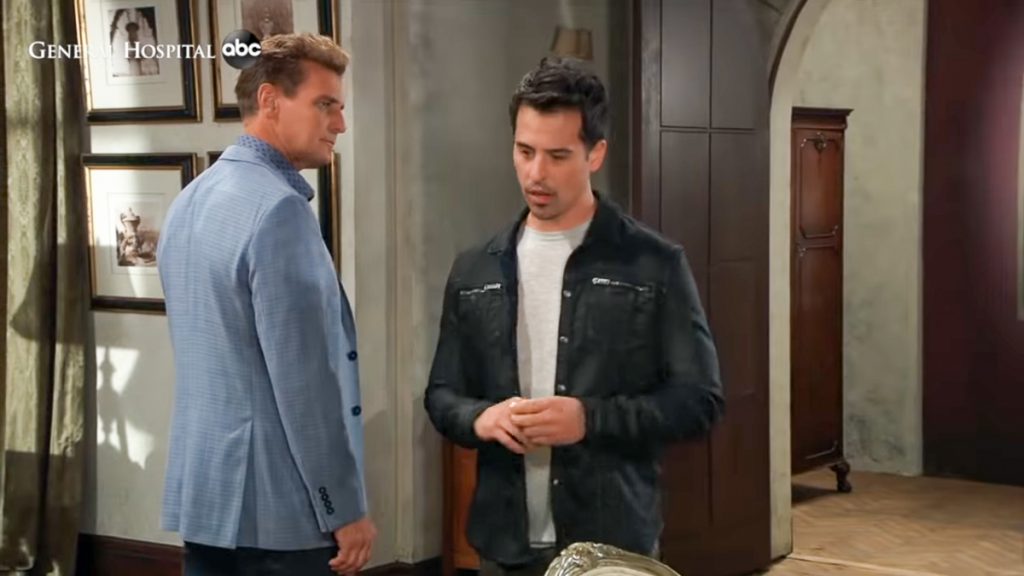 Welcome to your Tuesday November 5th General Hospital (GH) recap! We begin our day at Elizabeth Webbers (Rebecca Herbst) house where Cameron Webber (William Lipton) is running out the door to school. She says they need to meet with the principal to discuss his drinking, just as the doorbell rings and its Franco Baldwin (Roger Howarth).

At the Corinthos mansion, Carly Corinthos (Laura Wright) tells her daughter Josslyn Jax (Eden McCoy) that they have a meeting with the school principal. Joss gets upset and goes outside where she sees her uncle Lucas Jones (Ryan Cranes) is having coffee.

At Charlie’s Pub, Julian Jerome (Willian DeVry) is opening up the bar when Brad Cooper (Parry Shen) comes in and asks Julian for “one more chance”.

In Shadybrooke, Ava Jerome (Maura West) is half asleep when she hears a voice, she gets up to check. Nikolas is yelling at her from under the bed saying “he wants it back” as she awakes from the nightmare. Outside her room, a nurse tells Laura Spencer (Genie Francis) and Scott Baldwin (Kin Shriner) that Ava was agitated all night and was seeing things.

Laura and Scott go in to see Ava and check on her emotional state. Ava explains how she saw Nikolas the evening prior and she believes he is alive.

On the patio of Jasper Jax (Ingo Rademacher) new house, Nikolas Cassadine (Marcus Coloma) is enjoying the view. Jax asks him what he is doing outside as he has neighbors, Nikolas says he wants them to see, he is back to destroy Valentin. Jax scolds Nikolas for being seen by Ava Jerome (Maura West) and Nikolas retorts saying everyone thinks he was shot and drowned.

Jax tells Nikolas he made a stupid risk going out in public. He asks about Laura and Jax says she had a tough year, but is doing much better.

On the Corinthos patio, Josslyn Jax (Eden McCoy) asks her Uncle Lucas Jones (Ryan Carnes) if he wants to discuss what is bothering him. Lucas asks how she is doing after being caught drinking and she sarcastically says her parents are having a “summit” later to see what to do about her.

GH Spoilers – Brad begs Julian not to destroy his life

At Charlie’s Pub, Brad Cooper (Parry Shen) begs Julian Jerome (William DeVry) not to ruin his life. Julian says this is all about protecting Lucas and Wiley, he needs to leave town now. Brad yells at Julian that he is innocent of cheating and has changed his evil ways. Julian tells him to leave and Brad walks out, defeated.

At Elizabeth’s house, Franco is at the door and asks if it’s a good time to visit with both her and Cameron. Franco Baldwin (Roger Howarth). Franco says he and Kim are putting stuff in storage and is leaving town tomorrow. Franco flashes to a conversation with Kim Nero (Tamara Braun) where she admits she needs help and must leave Port Charles.

Kim tells Franco that she is going to leave town with him or without him. Franco goes to leave and Elizabeth grabs him and they kiss on the lips.

Jax comes by the house and Carly feels like the drinking was her fault. They sit Josslyn down and tell her all the danger drinking could have caused, they have lost trust. They take her phone and Joss apologizes then asks to leave the house for a walk.

Brad comes back to the house and tells Lucas that Julian set him up. He tells Lucas how he was being used by Liesl.

Julian shows up at Shadybrooke and Laura updates him about Ava’s state. He visits her room and she asks him to check under the bed for her.

At Jax’s house, Laura rings the doorbell as her son Nikolas contemplates answering the door…….flash to preview

The Bold and the Beautiful Spoilers: Thomas Sets A Trap For Hope – Throws Curve Ball Ahead Of Custody Battle