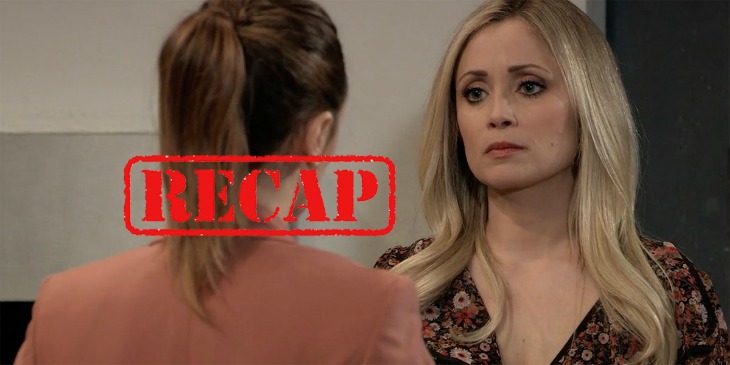 General Hospital (GH) recap for Wednesday, January 9, 2019 reveals Cameron (William Lipton) is ready to face the judge. Alexis (Nancy Lee Grahn) is not happy with the judge Cameron got.

Alexis addresses the judge and tells her that Cameron had a lapse in judgment. The dealer received a year in a juvenile facility, and the judge asks why Cameron shouldn’t get the same. Alexis asks if Cameron can read the letter he wrote to the court, the judge agrees. Cameron reads his letter and promises to learn from it.

Drew tells the judge that Cameron didn’t stop to think of the consequences, he did something. Cameron stood up and took action to help his friend who was suffering. The judge calls a recess while she makes her decision. Liz hugs Drew and thanks him. The judge puts Cameron on probation for a year.

Missed an episode? Not to worry! Full episodes of #GH are just a click away: https://t.co/xxzc1zauUV

Liz and Cameron thank Alexis. Franco (Roger Howarth) asks Cameron how this feels. Cameron will go to drug counseling and community service. Liz tells Cameron he has to get a job to help pay for Alexis. Drew tells Cameron to stop by, and he will help with a job. Cameron asks Drew if they can go on a hike sometimes.

General Hospital’s Carly (Laura Wright), Sam (Kelly Monaco), and Laura (Genie Frances) are gathered at that Floating Rib to watch the election returns. Laura thanks Mac (John J. York) for hosting her election watch party. Mac tells Laura she should be mayor because she is fair to everyone. Laura tells Carly that Kevin (Jon Lindstrom) offered to keep an eye on Ferncliff, Carly doesn’t believe that he will.

Carly tells Laura she had a friend look into her patient at Ferncliff. Carly tells Laura that Wilson was a part of this patients name and Laura suggest that name is an alias. Jordan (Briana Nicole Henry) and Curtis (Donnell Turner) come to the Floating Rib to speak to Mac.

The campaign is finished and all Laura can do now is wait for the results. Will she be the next Mayor of Port Charles? @JohnJYork
A dramatic, new #GH starts RIGHT NOW on ABC! @GenieFrancis #GH55 pic.twitter.com/pHKxIpbuYD

Laura is shocked that Sam doesn’t know why Curtis is there. Sam asks Carly to tell Laura goodbye for her. Carly tells Sam to tell Jason (Steve Burton) hi for her. Sam says bye to Sonny (Maurice Benard), Carly tells him Sam is going to spend time with Jason.

GH Spoilers Sonny Tries To Back Away From Laura

General Hospital’s Sam and Carly talk about Oscar’s situation. Sam is worried about Drew and Scout (Palmer and Poe Parker). Sam says Scout will only have pictures and stories of her bothers. Carly can’t believe Kim didn’t tell anyone about the diagnosis and asked Sam if she wants another drink.

"I need a doctor!" #GH55 pic.twitter.com/f8JMXIWqnn

The polls are about to close, Sonny shows up and tells Laura she will be under a lot of pressure to distance herself from him and he is ok with that, Laura says she isn’t. Sonny tells Laura she doesn’t need to get hung up on charges associated with him. Laura says they have known each other too long to pretend they don’t know each other now. Alexis rushes to vote and joins Laura at the Floating Rib.

General Hospital’s Curtis and Jordan are going through Ryan’s (Jon Lindstrom) case files. Margaux (Elizabeth Hendrickson) comes in and wants to speak to Jordan. Margaux isn’t happy with Curtis being brought in on the investigation. Jordan tells Margaux they have concluded that the killer is taking cues from Ryan Chamberlain. Jordan believes the killer has access to police files.

Margaux asks what the connection is between Ryan’s victims and these three. Jordan tells Margaux about the driver’s licenses missing. Jordan calls Sean Donely ( John Reilly) to get information. Jordan doesn’t get to talk to Sean but is directed to talk to Mac. Jordan asks Mac if they released that Ryan kept his victim’s licenses. Mac tells Jordan he might be able to help her and leaves to make a phone call. Mac doesn’t find a record of anything about Ryan’s trophies.

GH Olivia Is Worried About The Killer

General Hospital’s Olivia (Lisa LoCicero) and Ned (Wally Kurth) are watching their interview with Lulu (Emme Rylan). Olivia and Ned continue to watch the interview and talk about how both parties have run a clean campaign. Ned starts flipping through channels looking for something to occupy his time. Ned doesn’t want to watch election returns. Olivia tells Ned that she campaigned hard for him.

Ned's been Mayor of Port Charles for almost a year. Will his constituents allow him to keep the job? #GH is brand-new and STARTS NOW on ABC! #GH55 pic.twitter.com/A3v3DnldYM

Olivia isn’t sure she wants Ned to win the election. Ned asks if Olivia has decided Laura would be a better mayor. Olivia is afraid the killer will use election day to murder again and make it public. Olivia tells Ned they should quit while they are ahead. Ned believes in what he and Olivia set out to do; she will support him whatever it takes.

General Hospital’s Sonny stops by Lulu’s to check on her and the kids. The kids aren’t there, but Sonny wants to talk about Dante. Sonny asks if Lulu knows when Dante is coming home. Lulu tells Sonny that she talked to Dante on New Year’s Eve. Lulu tells Sonny she didn’t tell Dante about the killer, she didn’t want to worry him. Sonny tells Lulu he has people watching the house and offers her a driver, but she declines. Sonny excuses himself to meet Carly at Laura’s party.

Lulu says she will join them soon. Sonny tells Lulu not to be afraid to kick Dante in the butt and tells her the next time she talks to Dante to tell him to come home. Margaux shows up and wants to speak to Lulu. Margaux says Lulu is sitting on privileged information about a serial killer. Margaux says she has an issue with how Lulu obtains her information. Lulu questions what the problem is on reporting on closed cases. Lulu starts to record Margaux, but she refuses to let her. Margaux asks if Lulu noticed a signature to Ryan’s crimes.

Margaux refuses to tell Lulu what the signature is and tells her she would be safer to forget this conversation. Lulu tries to find out the connection between Ryan and the killer.