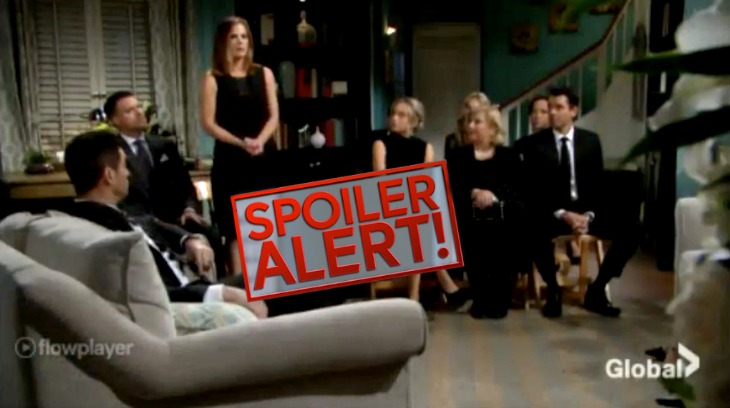 Arturo comments on the obvious – Abby’s father has been accused of killing J.T. She gets that it’s awkward, but wants to be there anyway. The charges against Victor Newman (Eric Braeden) won’t stop Abby from showing her support at Victoria Newman’s (Amelia Heinle) place.

As for Arturo, he ends up having to check out the furnace again in Mia’s apartment. Since the furnace will have to be replaced, they wait under a comforter for the new unit. Mia suggests that she’s upset by Rey being gone. It’s clear that plenty of sexual tension is still present for Mia and Arturo.

#YR CDN recap has JT's memorial beginning (with Traci and Mac there), and Arturo cozying up to Mia under a comforter… https://t.co/BeCQprjQZ8 pic.twitter.com/luKvT6Sktz

At the athletic club, Lola Rosales (Sasha Calle) is dressed up and ready for a fun date with Kyle Abbott (Michael Mealor). He feels like he’s finally found an easy kind of love. Kyle never knew it could be this way. Lola’s happy as well – and she’s glad Kyle isn’t pressuring her to move the sex part along. Kyle insists it’s OK, but his expression hints that he’s bummed about waiting.

At Victoria’s house, he’s concerned about Nikki Newman (Melody Thomas Scott) being there. Victoria thinks Nikki’s already been through so much, so maybe this isn’t the best idea. Nikki contends that she has to be there for Reed Hellstrom (Tristan Lake Leabu). She feels guilty since Nikki took his father away from him.

Victoria also spots Cane Ashby (Daniel Goddard) and gives him a hard time about showing up. She doesn’t think Cane’s presence is helpful. Over with Reed, he welcomes Traci Abbott (Beth Maitland) to the gathering. She shares that she can see the good parts of J.T. when she looks at Reed. The kid’s just happy there were indeed some good parts of J.T. and someone remembers them.

This week! Mac’s coming home on @YRInsider ❤️ Who on here is a #YR fan and how long have you been watching the show?? Anyone since the first time I was a part of the teen storyline? #HappyMonday! #Macsback @cbsdaytime @YandR_CBS pic.twitter.com/NxilUl7YII

Reed also has a chat with Mackenzie “Mac” Browning (Kelly Kruger), who hates what Reed’s going through. She feels like this has to be tough since there are still unanswered questions. Reed’s undoubtedly struggling to find closure because of those questions.

At home, Phyllis Summers (Gina Tognoni) resists Nick Newman’s (Joshua Morrow) suggestion of attending. She points out that J.T. was a terrible guy and Reed’s not going to notice her absence anyway. Nick brings up Nikki and the stress she’s been under. He wants to go offer support and an uneasy Phyllis decides maybe she should, too.

A cover-up meeting gets underway after they arrive. Phyllis spars with Victoria about whether Nikki should leave. Victoria gripes about Phyllis coming and argues that she should be the one thrown out. Sharon Newman (Sharon Case) is also there as the girls’ night gang bickers. Nikki eventually notes that she can’t guarantee the truth won’t come out tonight, which puts them all on edge.

Some touching J.T. speeches are made by Traci and Reed. As Nikki watches her grandson break down, she’s overcome with emotion. Nikki tells Reed that she’s so sorry, which leaves Phyllis worried about what might come next. Phyllis leaps to her feet and announces that there’s something else everyone needs to hear about J.T.

“The Young and the Restless” spoilers say some gripping scenes are ahead on the CBS soap. We’ll give you updates as other Y&R news and rumors emerge. Stay tuned to see what’s next in Genoa City.

The Young and the Restless Comings And Goings: Hunter King Back—Summer Newman Returns