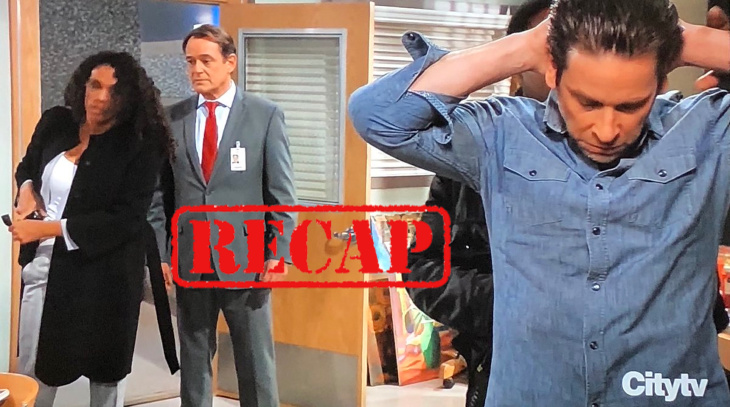 Nina asks why Sasha reacted the way she did to Valentin’s (James Patrick Stuart) proposal. Nina tells Valentin he was bragging to Sasha how happy she is. Valentin has to meet with Willow (Katelyn MacMullen) while Sasha, Nina, and Charlotte go ice skating. Nina and Sasha watch Charlotte skate while Nina questions Sasha about her reaction. Sasha tells Nina she’s now considering everything Valentin has done in the past. Sasha doesn’t want Nina to risk her all on Valentin.

Nina tells Sasha that Valentin gave her a second chance with her daughter, how could she not give him a second chance. Sasha tells Nina she always told her she couldn’t go back to Valentin. Sasha wants to know why Nina said no to marriage. Nina tells Sasha marriage is the beginning of the end. Nina tells Sasha she was happy with Valentin, but he couldn’t stop keeping secrets. Charlotte thinks Nina inherited her ability to skate from Nina. Nina sends the girls to a table and will join them soon.

As Maxie and Peter grow closer, they're becoming more invested in the people around them. An all-new #GH STARTS NOW on ABC! @wesramsey #GH55 pic.twitter.com/HlNy7cN9g2

Maxie can’t stop thinking about all the things Valentin could be keeping from Nina. Maxie tells Peter she meant she was opening her heart to him. Peter moves to kiss Maxie when Anna (Finola Hughes) storms in demanding to know what his going on with him. Peter assumes Anna ran into Liesl (Kathleen Gati) and she told her about the job. Maxie tells Anna that she talked Peter into this. Peter says he knows what he is doing; this isn’t Maxie’s fault. Peter explains to Anna why he dropped the charges and Anna wants him to promise to be careful.

Anna is less-than-thrilled to learn that Peter hired Obrecht at The Invader. But is there anything she can do about it? @finolahughes
A dramatic, new #GH starts RIGHT NOW on ABC! #GH55 pic.twitter.com/VgD7M6NLxt

Peter doesn’t need Anna running to his rescue; Anna says he can’t stop her and leaves. Maxie apologizes for coming between him and Anna. Peter assures Maxie one more thing isn’t going to break their relationship. Peter says Liesl may have some good ideas as a columnist. Maxie tells Peter it is up to them to find out what Valentin is hiding.

GH Spoilers Finn And Robert Are Going After Cabot

Anna threatens to kill Liesl if anything happens to Peter. Anna excuses herself to talk to Peter. Liesl says she might interview Finn on self-medication, Finn is looking forward to her article on how to be a better kidnapper. Anna rejoins them, and Finn asks how things went with Peter. Finn says he thought he could talk to Cabot researcher to researcher. Robert and Finn think Anna would set off alarms with Cabot if she were to meet him. Finn says Anna is staying home to keep Peter safe. Anna would have thought Finn had enough of mad scientists. Anna tells Finn to be careful and stay out of danger. Finn promises to stay safe, they kiss.

General Hospital’s Franco (Roger Howarth) is in his art room at the hospital. Franco shows Liz (Rebecca Herbst) the pictures he has drawn before throwing them away. Franco says the PCPD has every reason to suspect him. Franco and Liz talk about Aiden’s (Jason David) day with Brad and Lucas. Liz wants all of her boys to be happy, including Franco, they kiss. Franco tells Liz about a plan he has to bake with the kids when Jordan (Briana Nicole Henry) arrives and demand she step away from Franco.

Liz demands to know what is going on with Jordan. Ryan (Jon Lindstrom) comes into the room and pretends to try to calm Franco down. Jordan tells them Lulu (Emme Rylan) identified him as her attacker. Liz wants to call Scott (Kin Shriner). Jordan arrests Franco who eyes Ryan. Liz kisses Franco goodbye and calls Scott and tells him to get to the PCPD. Laura wheels Lulu into the hallway and Liz asks why she would say this about Franco. Liz says Franco didn’t do this and Lulu knows she didn’t

General Hospital’s Ryan plants the idea in Lulu’s head that Franco attacked her. Ryan brings Lulu out of hypnosis and asks what she remembers. Lulu tells him she saw everything, it was Franco. Ryan has Laura and Jordan come into the room with Lulu. Jordan asks if Lulu remembered, she says I did. Lulu tells them it was Franco that tried to kill her. Jordan wants Lulu to tell her exactly what happened.

Ryan got what he wanted out of Lulu, West Coast. But can he keep that narrative alive with the PCPD? A thrilling, new #GH STARTS NOW on ABC! pic.twitter.com/009607wIkw

Lulu says she is ready to tell them about the attack. Jordan records Lulu’s statement. Lulu tells them she let Franco into her office and Franco had a knife. Lulu assures them Franco is the man who attacked her. Lulu says she tried to leave, but he followed her. Lulu doesn’t remember how she got from the office to the Metrocourt. Lulu doesn’t remember Franco stabbing her, but he had to.

Ryan isn’t sure if Lulu will recover any more of her memory. Laura tells Jordan it is time to do what she needs to do. Laura wants to know if anyone knows where Franco is. Laura calls Liz and asks to talk to her, Liz tells Laura she’s in the art therapy room with Franco. Liz agrees to meet Laura, Jordan goes after Franco. Ryan takes out the other licenses when he returns to his office and says the others have gone to serve the greater good.

Meanwhile, General Hospital’s Lulu tells Ryan she hates being this fragile. Ryan tells Lulu she is anything but fragile and tells her not to let this get to her. Laura helps Lulu into her wheelchair. Ryan says he needs to go to catch up with Jordan to talk Franco down. Ryan goes through the licenses in his box and wipes off the fingerprints. Ryan plants three of them to frame Franco.

GH Willow Believe Charlotte Needs To Be A Kid

General Hospital’s Valentin meets with Willow. Valentin explains to Willow that Charlotte feels better being with Nina and himself. Valentin tells Willow that Lulu is doing very good. Willow gives Valentin Charlotte’s workbooks and letters from some of the children.