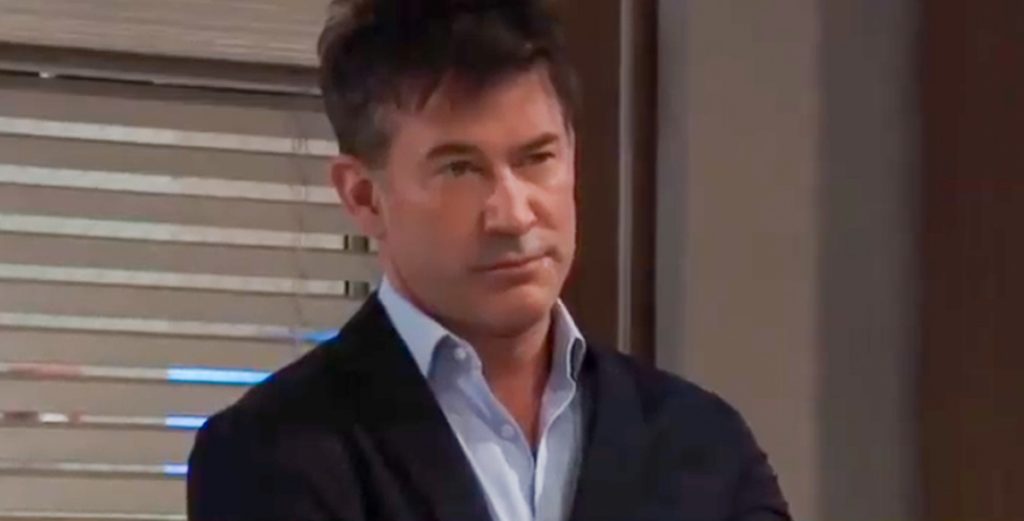 At Port Charles high school, Lulu Falconeri (Emme Ryan) sees Dustin Phillips (Mark Lawson) and jokes that she needs a hall pass from him. The flirt and kiss then she hands him a Thanksgiving card from Rocco.

In detention, Cameron Webber (James Lipton) and Trina Robinson (Sydney Mikayla) have confronted Dev about who he really is. Josslyn Jax (Eden McCoy) interrupts and says sometime secrets are meant to stay secrets.

At the docks, Hayden Barnes (Rebecca Budig) is alone thinking about the money offer from Valentin Cassadine (James Patrick Stuart). Nikolas shows up at the pier and says he overheard the conversation that she had with Valentin about the codicil.

Hayden says she does not have a choice in the matter anymore, Nikolas offer to help her.

GH Spoilers – Valentin Cassadine is up to no good

At Wyndemere, Charlotte runs into the living room to ask poppa when she can go back to school. He tells her that she needs to stay safe and she flashes to catching Nikolas Cassadine (Marcus Coloma) at the house. Charlotte hopes that this time the wedding will happen and they will be a happy family.

At Jasper Jax’s (Ingo Rademacher) home he confronts Nikolas and asks him where he is going? Suddenly theres a knock at the door and its Laura Spencer (Genie Francis) insisting on coming in. Jax opens the door and Laura can’t believe she got a wedding invite from Nina.

Laura brings up the fact that Jax’s credit card was the one used to steal the van that freed Cassandra. She wonders if it was not a mistake that it happened and someone was framing him. The doorbell rings and its Martin Grey (Michael E Knight). He says a client of his has the portrait and is willing to take a financial offer for it.

Neil tells Alexis that Kendra was spotted in the back alley where the dead rats were poisoned. Alexis wonders what motive Kenda would have to try and kill her. Neil has to run, but asks her to jog her memory to see if she knows Kendra somehow.

General Hospital #GH Spoilers: Why Didn't Nikolas Get Confused When He Saw Jason With His Old Face On The Docks? @celebratesoaps https://t.co/KwOUbMpEPy

At the school, Lulu is chatting with Dustin when he invites her and Rocco to the Thanksgiving parade. Lulu agrees to go if he comes over for breakfast first.

Dev Cerci (Ashton Arbab) gets defensive about his secret and tells them all to back off. Josslyn has to break up an almost fight between Dev and Cameron. Joss says they need to tell the truth about who he is and Dev tells them that he is Turkish. They explain that he is in the country illegally and Dev could be deported if found out.

Nikolas says he can help Hayden escape and she says there is no way she is leaving Port Charles again. Hayden does not want to take Violet away from Finn again.

Laura and Jax wonder who knows about the codicil, could it be Valentin?

Kendra tries to get Alexis to take a workout supplement again, but Alexis is hesitant to do so.
Martin Grey shows up at Wyndemere and has recorded the conversation between Laura and Jax.

Hayden flashes back to when she finally told Finn about Violet. She tries to call Finn, but is grabbed from behind by an assailant…….flash to preview

The Bold and the Beautiful Spoilers Wednesday, November 27: Shauna Comforts Ridge – Liam Hears How Hope Got Thomas To Sign The Adoption Papers