The Young and the Restless (Y&R) spoilers tease that Christine Williams (Lauralee Bell) will face her worst nightmare during the week of July 8. She will settle her lawsuit with Victor Newman (Eric Braeden). The only problem is, it will put Christine out of a job and in the middle of some intense drama from the Newman family. Here’s what we know about what’s ahead on Y&R.

Paul Williams (Doug Davidson) brings his wife home a bouquet of flowers and while she loves the thought, she is noticeably on edge about what’s coming up with her Newman lawsuit. According to CBS Soaps In Depth, Christine’s phone rings and her life almost instantly changes.

Young And The Restless Spoilers – Christina Accepts Her Defeat

Paul watches as Christine begs the caller to reconsider as they are making a huge mistake. The Young and the Restless spoilers state that eventually Christine realizes that she has lost the battle and accepts her defeat.

Christine hangs up the phone and she tells Paul that the mayor is predicting that they will lose the lawsuit against the Newmans and he wants to settle the case. Paul thinks this is a mistake and wonders what message this is setting. 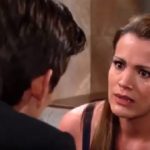 And, then Christine reveals the worst part of the deal with the mayor. The Young and the Restless spoilers tease that the Genoa City Mayor wants Christine to be the one to announce the settlement.

Y&R spoilers tease that Paul understands that Christine has been under stress the past year and that JT Hellstrom’s (Thad Luckinbill) murder case was personal for her. Paul points out that the case should not have been personal as that suggests that she used her position to target the Newmans.

As she prepares to make the announcement to Genoa City, Paul worries about the toll the ordeal is taking on Christine. And, what she does next, it could stun the whole city. One can expect Christine will do whatever she has to repair her image. The question is, how will she handle the news that she basically has to cave to Victor Newman yet again?