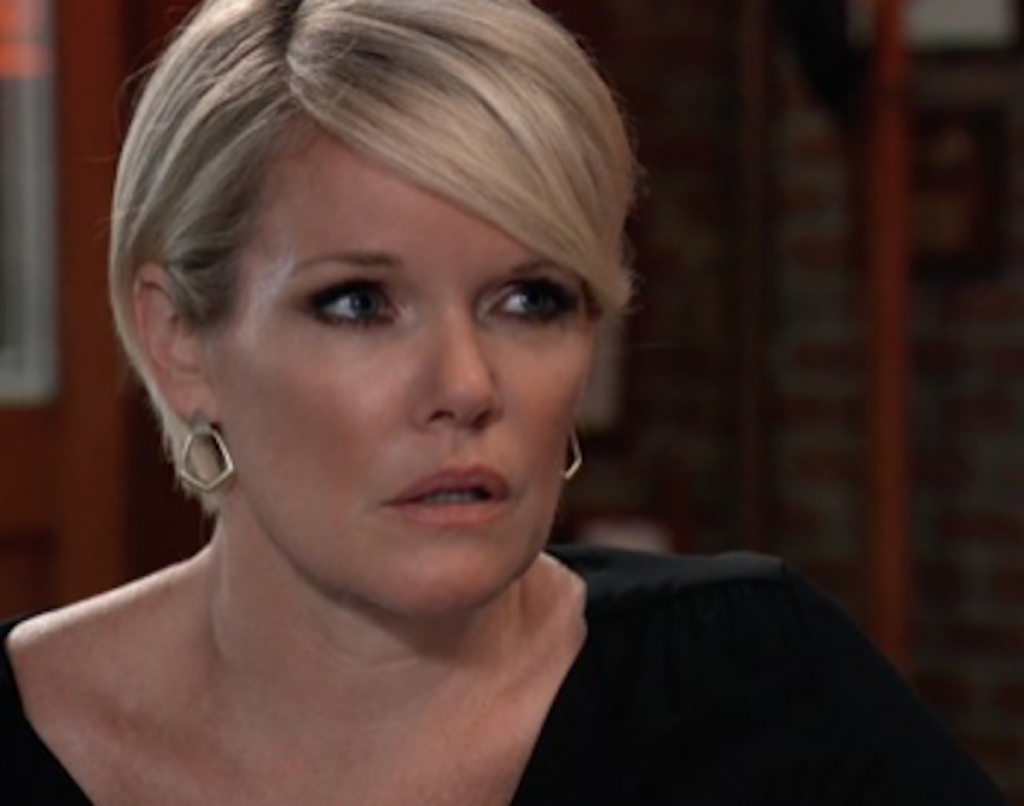 Also at the park, Shiloh Archer (Coby Ryan McLaughlin) is on the phone when Danny’s soccer ball heads towards him.

At the Aurora Media office, Drew Cain (Billy Miller) has opened his medals of honor from the Navy and is showing them to Kim Nero (Tamara Braun). He explains they were a final gift from Oscar.

At the Metro Court restaurant, Stella Henry (Vernee Watson) is chatting with Jordan Ashford 9Brianne Nicole henry) when Curtis Ashford (Donnell Turner) sits down with them. Stella relays how proud she is of his new security job in the corporate world.

Jordan asks about Marcus and is happy that they have become good friends. Stella says she did not find any more out about the genealogy search. Jordan says she submitted her info to forensics and there is a long lost relative she needs to know about. They say the person she’s related to is much closer than she realizes and wonder if she had a child she gave away. Stella freaks out and says there is no love child running around.

Peter August (Wes Ramsey) stops over at Lulu Falconeri’s (Emme Rylan’s) house and says he left his wallet in the couch. He spies a bottle of wine and realizes she is drunk. Lulu is drunk and blabbers on and on about her writing and stories.

Peter says Dante is an awful person, which sets Lulu off. She stars screaming that Dante has PTSD and he still loves them.

On Spoon Island, Valentin Cassadine (James Patrick Stuart) helps Liesl Obrecht 9Kathleen Gati) into the castle. She jokes that she doesn’t need a chaperone, she has been holding people hostage at Wyndemere long before he arrived. Nina Reeves (Cynthia Watros) says she feels safer with Liesl staying with them. Sasha Gilmore (Sofia Mattsson) enters and says Liesl will have even more room, when she moves out.

Sasha says she’s going to stay in Port Charles and get her own apartment. Valentin talks to Sasha privately and says their plans have worked out. Valentin says the biggest problem is Aunt Liesl, who we see listening from outside the door.

Drew shows Kim his war medals and she reassures him what a good man he is. They discuss how he saved Shiloh back in the day and never knew what a sick person he would become.

Ava Jerome (Maura West) arrives at Pentonville to visit with Ryan Chamberlain (Jon Lindstrom). Ryan picks up the prison phone and says “have you missed me as much as I have missed you?” Ryan says he saw her Crimson cover and he really liked it. He complains again about his kidney being taken to save Jordan.

Ava explains that she has been talking to a psychic to try and make peace with Kiki. Ava asks Ryan to apologize to Kiki for what happened. Ryan says Kiki has no soul and Ava says she will be glad when he is finally dead.

At the park, Jason Morgan sees Shiloh Archer talking to Danny and runs right over. Shiloh tells Jason his son is such a nice little boy and Jason threatens him to stay away. Jason threatens to beat Shiloh to a pulp if he doesn’t go away.

Sam, Jason, and Danny walk away from Shiloh and explain that he is a bad man.

Curtis tells Jordan that maybe they need to drop this search for the lost relative Stella has.

Lulu screams at Peter to stop trying to understand her family.

Liesl gets upset when she realizes that Hayden is coming to dinner. Once alone, Liesl accuses Valentin of trying to kill her.

Jordan tells Stella that her mystery relative may live in the Port Charles area. Shiloh meets with a mysterious figure who gives him a flash drive………..flash to preview