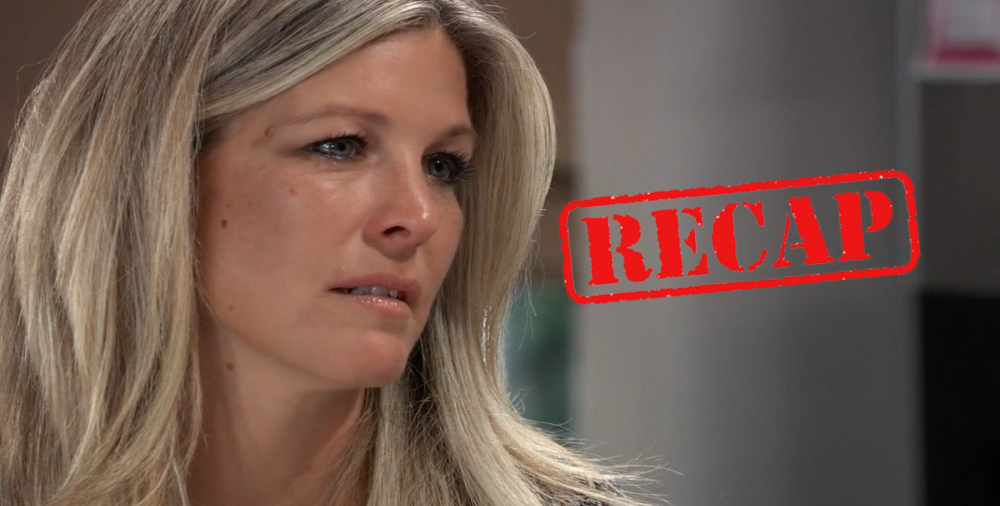 Welcome to your Tuesday, July 2nd General Hospital (GH) recap! We begin our day at the Crimson office where Jasper Jax (Ingo Rademacher) calls Carly Corinthos (Laura Wright). He thanks her for his office renovations and asks her to go out to lunch with him. She says that she cannot, she’s in the middle of something.

GH spoilers reveal At the Metro Court restaurant, Scott Baldwin (Kin Shriner) approaches Ava Jerome (Maura West) and asks if they can talk. Ava says she’s just on her way out to work on her cover of Crimson Magazine. Scottie says that it’s great she’s doing that, but he could use a friend right now.

At General Hospital (GH) Bobbie Spencer (Jaclyn Zeman) thanks Epiphany (Sonya Eddy) for her advice regarding the diabetes diagnosis.

At Charlie’s Pub, General Hospital Hamilton Finn Michael Easton) is on the phone with Anna Devane (Finola Hughes) inquiring about her search for her sister Alex. Anna asks how Jordan Ashford (Brianne Nicole Henry) is doing – he says she’s here at the pub having breakfast.

At another table Jordan, Curtis Ashford (Donnell Turner) and Stella Henry (Vernee Watson) are having breakfast. Stella and Curtis tell her to enjoy her time out of the house. Jordan says that she really wants to get back to work. TJ says that he has been doing some thinking and he does not want to go back to medical school. He thinks the money should be going towards helping Jordan.

General Hospital Spoilers Carly Corinthos Is Worried about The Baby

In the Corinthos mansion kitchen, Carly Corinthos (Laura Wright) is doing research on spina bifida. GH Spoilers reveal her husband Sonny Corinthos (Maurice Bernard) approaches and tells her she does not need to stress herself out right now. Sonny says they can handle any issue that arises, they have a strong foundation.
Carly is worried the baby may be very disabled and need a lot of extra help.

Hamilton Finn asks his brother what is wrong, and Chase says he’s about to break his girlfriend out of lockup. Chase tells Finn about the baby that Willow had and now the father wants custody. Finn explains about Anna being on her mission and he hopes that she comes back.

Ava Jerome (MauWestest) asks Scott Baldwin (Kin Shriner) what is going on with him? He says he’s been feeling lost since Gail passed away. Ava asks if they can talk about it another time, she thinks he’s in the throws of a midlife crisis. She says that maybe he should take time for fun and buy himself a Ferrari.

Ava shows up at Crimson to chat with Jax about her upcoming interview. She says she is not going to do the interview right now, she has something to do,

GH Franco Baldwin Has A Surprise for Liz

At General Hospital (GH) , Elizabeth Webber (Rebecca Herbst) approaches Franco Baldwin (Roger Howarth) outside his art room. She tries to enter, but he tells her she cannot come in right now. He apologizes and says he was working on a surprise for her. They discuss their wedding date moving.

At General Hospital (GH) , Scott finds his son Franco to see the surprises he’s been working on. Franco says he hopes he brings a plus one to the wedding and Scottie gets agitated. Scottie says he wants a woman like Elizabeth and maybe some children, then backtracks and says no children.

At the Nurses station, Elizabeth asks Bobbie and Epiphany if they got her change of venue email. Bobbie says she is going to try to make it, but not sure – she admits that shes the one who is sick.

Curtis sneaks through Jax’s office and finds a file on Valentin Cassadine.

Scottie sees Bobbie in the GH hallway and asks how she is feeling, she explains about the diabetes. Out of nowhere, Scott asks Bobbie to marry him.

Elizabeth and Franco kiss and talk about how much they love each other. We see a woman’s hands setting up a flight to Port Charles.

Ava talks to someone on the phone while holding a photo of Kiki and says she is coming prepared. Carly says that the baby they are having is a gift and it’s not a mistake. They both admit they are scared….flash to preview